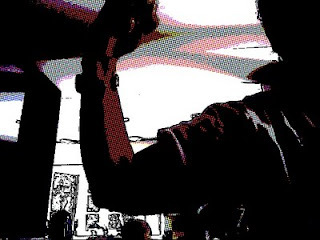 "I thought you were a feminist," the husband joked after reading my last post. I am a feminist. Really. Truly. Germaine Greer, Nancy Friday, The Boston Women's Health Book Collective collectively, Betty Friedan, Kate Millet, Sisterhood Is Powerful,  Adrienne Rich, I read you all. Yes, sisters, I am a feminist, I swear. I was primed.

So why the weird stuff about ambition? And how to explain my existence as a stay-at-home mom?

I was never going to be a stay-at-home mom. I was going to have a profession. A sanctioned, capital- P profession. Sanctioned by the parents, I mean. I've dipped into that a bit already, but to recap: That ship ran aground in my mid-twenties, when I realized - surprise- that what I really wanted to be was a writer, and immediately began doubting myself. Stepped off the sanctioned path, got lost in the woods.

Bad mixed metaphor, and beside the point. The point is, I was going to work "outside the home." Yes, I wanted children; but I was in one hundred percent agreement with Adrienne Rich that just because women are biologically compelled/created to have children doesn't mean that having children is the ultimate fulfillment of a woman's destiny. Motherhood wasn't going to complete me. It wasn't my destiny, it was my choice. I agreed then. I agree now. Really.

So even though no childbirth was going to be my ultimate experience, even though having a child wasn't going to fill some hole in my womanhood that would forever go empty, no baby was going to plug a gaping hole in my psyche, well, maybe - definitely - because I didn't have a mother, it did.

Probably because my mother died when I was a baby I discovered a hunger for that mother-child bond that awakened with the birth of my first child. I took a leave of absence from my teaching job, and suddenly, I didn't want to go back. I didn't want to leave my child. Ever. Possibly to a pathological degree.

Who would want to miss a moment when every moment with a baby is full of change and growth?

At the same time, who wants to be "just a mom," a full time job with zero status (unless it is the status gained by proving that you're able to stay home when almost everyone else has to work at least part time, but that's really just reflected status from the breadwinner, not true status?) Who wants to give up autonomy, financial independence, future financial gain, lunches out,  and fun shoes to stay home with this magnetic source of drudgery, filth, frustration, and fatigue?

Choose motherhood? You spend years on the floor or the bathroom--which, by the way, you can never enter by yourself (and closing the door while small hands beat upon it and little eyes peer underneath it or pass desperate notes through the slit does not count as privacy.) "They suck everything out of you," I've heard more than one parent say about their children. The best comment I ever heard, though, from a friend whose three children were under five at the time, was that she "felt like an elevator." Choose motherhood? I did.

If you'll permit an extended metaphor, I would say that being a mother is like a being a nail. You start out all shiny and pointed, and end up dented and flush against the surface of some structure whose shape you can't discern, and which is permanently under construction. Oh, sure, it's only you, doing your part to create a dependable, sturdy, solid corner of the scaffolding of society, but it's awfully hard to remember you're doing something important when your head's been pushed down so far, and not too many others notice, either.

And as wrong as it feels to agree that motherhood has such low status, I actually spend time distancing myself from this choice by making sure that everyone knows that I'm a writer, too. I'm a mom, but also a writer. I mean, it is true. I am a writer. And one of the benefits of being a writer is that I can arrange my schedule so my children are the priority when they're around. For many years they were the only priority, because the labor side of motherhood was so intensely physical and non-stop there was no time or energy for anything else. Even so, I clung to the writer-identity to give myself a modicum of self-respect. Oh no, I'm not "just a mom." I'm a writer.

And another thing. The raising of children is one job, the management of a home, another. I am a parent, yes, but not a maid or a domestic goddess. Who wants to be that? Only very famous people who get paid to do that work.

As usual, I am a welter of conflict about this topic. I feel the job is vital; but does that mean that mothers who work outside the home are doing a lesser job? I know that many who do feel they're failing at both, the paying job and the mom job. It's damn hard to do one thing really, really well. So doing two?

The bottom line is that I feel angry that I feel ashamed  about this choice. I feel I have to apologize to the "real" feminists, because to choose mothering as a career places you in dependency on someone else, and that is a big, feminist no-no. Furthermore, I worry I'm being a bad role model for my children. Mine are both girls, but if I had a boy, I would also worry that he would think that being "just a mom" is what women should be. And there's reality, too, which is that my children have to plan to take care of themselves financially, and while I'm providing them a role model of a mother, I'm not providing them with a role model of a financially independent working woman.

That part I'm trying to change.
Posted by Hope Perlman at 10:20 AM