I’m baa—aacckk, Readers! I survived our family trip in celebration of my 50th birthday. Are you 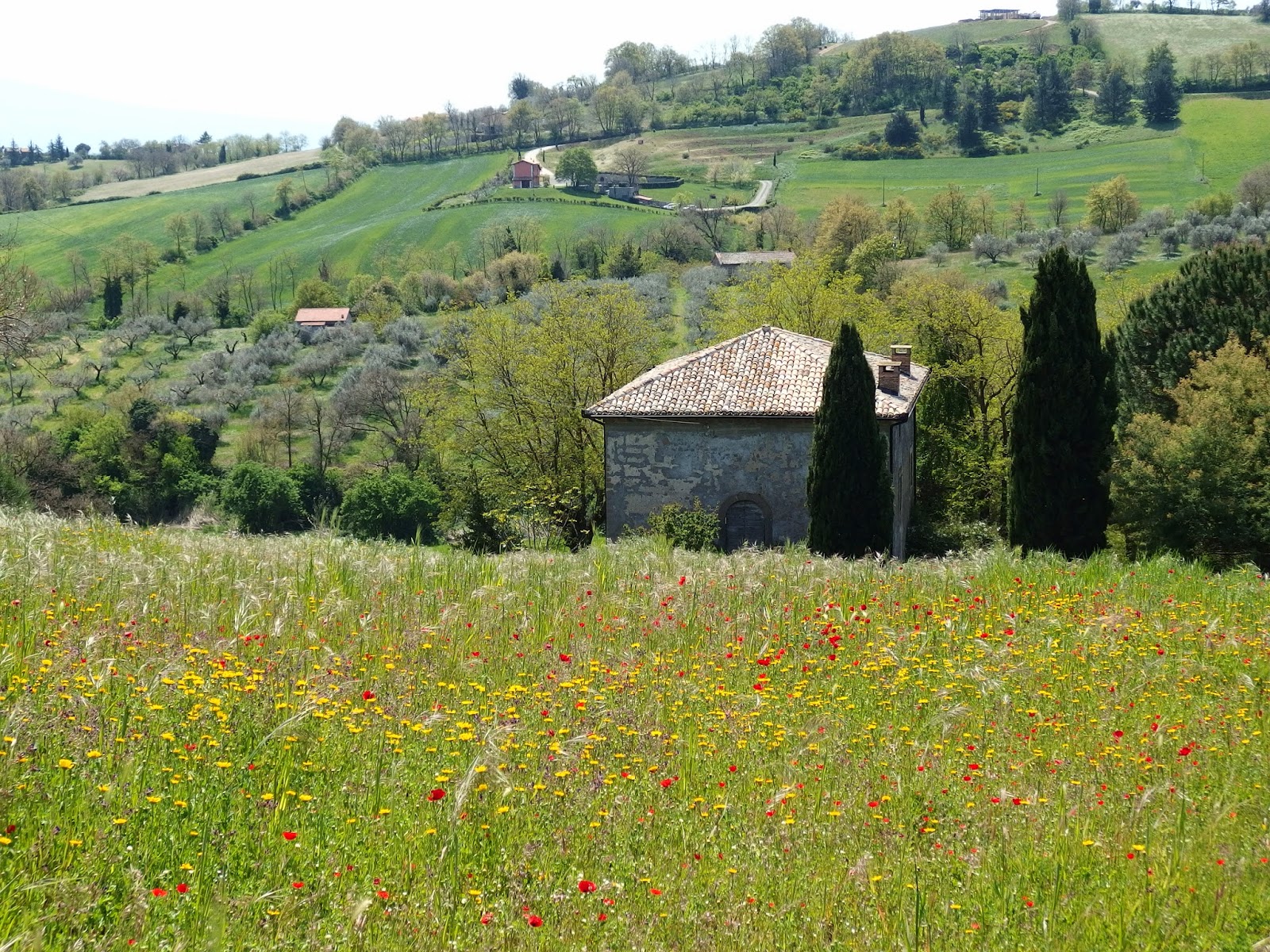 surprised? I am, a little – though not really. I mean, we went to Italy, not Mars. We took a route well-traveled. Not that you’d have known that from my mental state before we left, which was a sad manifestation of my provinciality.

Anyway. I wanted to write a post before we left, and I did write one, but I decided not to publish it on the outside chance that someone reading it would then realize we were out of the country and that our house was standing empty. Leaving our stash of gold bullion and Faberge eggs available for poaching, of course. Not that I suspect any of my loyal readers of criminal impulses. You just never know who might have come across my blog in the wild west of the Interwebs.

So here’s what I wrote April 4, the day before we left:

There’s a little bird, a chickadee I think, building a nest in our side portico. On top of an upside down broom, actually. Right now the nest looks like a small pile of leaves, but I watched this birdie put a piece of leaf there, definitely with a purpose. I’m amazed that an upside down broom leaning in a corner seems sturdy enough for a nest. If that bird had any idea we have a dog, or how loud the storm door bangs, the bird would nest elsewhere. But the coast is clear today. The dog is in the kennel. And we are preparing to leave for two weeks. Is this a good or bad thing for the bird?

It’s the day before departure. The dining room table is covered with supplies. Most of a medical nature. Things, as a friend put it, that you might need at two in the morning in a hotel. Which is a lot, potentially. Especially when you’re me, I guess. Ibuprofen, acetaminophen for adults and children, Benadryl ditto, various stomach aids like Tums, Peptol Bismol, and Imodium. Yes, I am prepared as if we were going to a third world country. I really am, since I followed the list my friend wrote up when her son did travel to a third world country. Even then, he didn’t need anything in the emergency kit.

Look, I haven’t been to Europe in a long time. I’m in a dither. Yesterday, I realized that all of the shirts I was planning to wear require hanging to dry, which would make it hard to toss them in the hotel laundry or in a laundromat. So I had to make an emergency run to buy some t-shirts. I had this idea that I could look vaguely stylish as a tourist in Italy, stylish enough to not look like an American tourist in Italy. Except that I’d be traveling in a band of three obviously American tourists. In my fantasy, I guess I would appear as their tour guide, perhaps? But who am I kidding? It’s interesting that I’ve become focused on looking good at just the time of my life when things are starting to fall apart, physically. “Interesting” here substitutes for pitiful, inevitable, ironic, and of course, time consuming. Take my eyebrows. Please. Where did all these crazed curly eyebrow hairs come from? Crikey! And to have it happen now, when my daughters are reaching puberty. While they are flowering, I am decaying.

So I will wear my wash and dry t-shirts with my travel pants and my comfortable shoes that aren’t sneakers but still scream “tourist!” and take my wild eyebrows and all my medications and somehow manage to cross the Atlantic.

None of this has anything to do with success. Unless you consider that I’ve survived turning fifty and have been able to start reading the guide book and planning restaurant meals and stuff I couldn’t bring myself to do for weeks and weeks because of sheer – I don’t know what - sheer terror, maybe – as success.

So. With my sister the psychoanalyst’s wish – “May all your glitches be minor” -packed in my luggage, we arrived in Rome. I’ll spare you the travelogue and the pasta and gelato rhapsodies, except to say that with the help of a couple of friends’ recommendations, as well as the travel agent’s and the guidebook, we ate great. We spent a mostly fun two weeks, and made much of my aunt’s admonition to “watch the cobblestones and don’t break an ankle.” She was right, there were a lot of cobblestones. At least once a day one or another of us said, “Careful, don’t break an ankle.” Sometimes, for variety, one of us said, “That was close! I almost broke an ankle.” But nobody did, thank goodness.

Did I mention that the 6th grader woke up with a sore throat the day we left on our trip? That’s right. Glitch. But it was minor. She did have a cold almost the entire trip. Fortunately, I had medication (see above). For her, I mean, as well as for me. Also, one of her loose teeth broke. But it didn’t hurt, so that was minor. And her ankle hurt intermittently. But she didn’t break it. The tenth grader had a sinking spell in the Uffizi and I had a moment of panic that she was going to be sick amongst the great works of art. But it passed.

Italy. Getting there had seemed impossible. Having made it, I spent several moments trying to really feel that I was actually, finally, at last there. Really feeling present in that place turned out to be just as hard as it can be to feel present in any place. I sat on a stone ledge at the farmhouse where we stayed in Lazio near Umbria and looked out at the definitely Italian landscape: olive trees in meadows of undulating grass and yellow and red wildflowers running down and up hillsides with Fifteenth Century churches in the distance and had to say it aloud to the husband to make it feel real. “We are in Italy.” It only sort of worked.

Too soon we were returning to the states, and the last bit of Italy I saw was the gesticulating conversation of the four Italians sitting in front of us on the plane heading to New York. Now it’s been just a few days since we returned, and Italy feels as far away as it did before.

We arrived home to discover that the tenth grader had left her lovey Bunny at the airport hotel. So that’s a glitch. We have been in touch with them, and they claim to have it, and to be willing to send it, but we are still waiting for the final word on how much it will cost us. I hope it won’t be anywhere near as much as it cost us to do our laundry in the hotel in Rome.

I feel it’s important to note, regarding my concern about looking American, that towards the end of our vacation, I stopped in a bar – that’s a snack bar, coffee shop, and bar rolled into one – to use the, erm, facilities, and on my way out, one of the customers said to me, “Deutsche?”  So while I looked like a tourist, at least I looked like a European one. 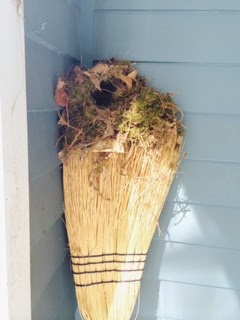 Something that made me happy to be back home was that the bird’s nest that was under construction when we left was fully formed when we returned. And, according to the husband, who is tall enough to see into it, there were four eggs. But where was the bird? I worried all Sunday and Monday that we had scared away the bird, that our return had rendered what had seemed a quiet corner, a loud, threatening place. Then I thought, This is a critter that built its home on top of a broom leaning in a corner. How much security does it need? Less than I, apparently. And then, Tuesday, I stood on tiptoe and nosed up to the opening of the nest – and met a little black eye. The bird mamma was in there, sitting on her eggs! This made me so happy, Readers, really. Ridiculously so.
Posted by Hope Perlman at 1:53 PM 4 comments: