Annals of Parenting and Suburban Life: Stereotypes and Success

Big news: I am being interviewed for a podcast this weekend. I don’t yet know when it will be aired, or what it will be called, but hey, I might as well brag about this part because life is short, and you never know if you’ll be around to brag later. Or if later will ever come. I will certainly inform you all if later does arrive and there's a podcast for you to hear.

Small news: I have been busy teaching, and drinking and eating oat products. That’s correct. Oats and oat by-products.

Let me elaborate. There’s my morning and evening mug of oatstraw infusion—that’s a long-steeped herbal tea, or tisane, as they say in France. Supposed to keep me from drying up into a husk as I enter cronehood. So far, so good.

There’s my breakfast steel cut oats, my cold weather breakfast. We all know oatmeal is good for us. Keeps us regular. And also, it’s a vehicle for a bit of maple syrup.

And then there are my oatmilk lattés. More on that in a minute.

I am basically oats at this point.

Sometimes, while eating my oatmeal with walnuts, slivered almonds, cinnamon, sliced banana, and a spoonful of maple syrup, I gaze at something educational or informational on the Internet. Most of the time, what I gaze at on the Internet is neither of those.

Exhibit A: During her last visit home, the college junior showed me some YouTube videos of a young male comedian who dresses up as “Gayle Waters-Waters”, a high-strung suburban mom who’s on an edge as sharp as one of my new Japanese knives (thanks, MIL).* Those knives are sharp. Gayle is always in workout clothes, speedwalking while holding hand weights, cleaning in hyperdrive, or barking at her bland mom friends in their bookclub. She measures her drop cookie dough placement to ensure proper spacing on the cookie sheet, and she has a labradoodle accepted to Carnegie Mellon. And two kids who are constant disappointments.

I have a labradoodle.


And I was recently forcing the 11th grader to look at the Carnegie Mellon website. When I say “forcing” I mean “encouraging,” by the way. No one forces anyone to do anything in THIS family. We lovingly stimulate an intrinsic motivation. That is key to success, by the way. In case you were actually reading this blog post for some information on that topic.

The college student loves this series, and it is amusing, definitely. Gayle is everything to the max, as we used to say back in the ‘80s. But I couldn’t help think a couple things: One, that the college student must think I resemble this person; and two, how very much I don’t think so. And yet, sometimes it hits you just how much of a stereotype you are.

A recent morning, I got in the car to drive the carpool and my yoga mat was frozen.

Other news: I am over the moon about two things, and maybe these are just stereotypical suburban mom things, but still, I am transported. One, is that oatmilk has arrived in our café. Now, I’ve been waiting. I got on the oatmilk train a while ago, after reading an article about it in the NY Times, of course, about two years ago. I tried it almost a year ago in NYC when I went to a (very unstereotypical, people, seriously) writer’s conference in Chelsea. And then I began noodging our café about it. Like, seriously noodging; I stopped one of the owners and talked at him, sent newspaper articles, and asked every barrista if they had oat milk yet every time I ordered a coffee, and I have to say, they went from unaware, to aware and unable to procure, to having it.

Oat milk is in short supply. Or it was, for a while, because every lactose intolerant coffee drinker on the planet suddenly wanted it; whereas the Swedish, who invented it, have been drinking it for years.

And isn’t that irony? The Swedes, who with their fellow Northern Europeans, are among the few peoples who don’t tend to be lactose intolerant**, created the best milk substitute? I believe it is ironic. Really ironic, not Alanis Morrisette ironic. Alanis can have her rain on a sunny day. That is not ironic. It’s just unusual, and often means you can see a rainbow.

On the positive side, here is proof activism works. And now, I can have my morning oatmeal and follow that with a cafe au lait or latté with oatmilk.

You know what else is ironic? Here’s true irony. A long time ago, not long after the Berlin Wall came down, one of my housemates, who was from Texas, traveled across country and met an East German who was traveling around the USA, and brought him back to the big house where we all lived, and he moved in. Eventually they married, and eventually, they divorced, and along the way, he became a citizen and she, my heart-of-Texas-housemate, moved to Berlin, where she fell in love with a German and stayed.

I saw my former East German housemate last weekend, along with several other housemates and exes and friends, many of whom I hadn’t seen since the mid-nineties. It was a solid reminder that behind every dang stereotype is an individual. I mean, c’mon, did Gayle Waters-Waters ever dream of living with a bunch of MIT grads in a co-operative house? I think not.

I belong to two book clubs. So, sue me.

Okay, and the other thing about which I am suburbanly happy to a startling degree is that our town is building a sidewalk on my street.

Okay, I take that back. It’s not on my actual street, which is part of a tangle of curvilinear streets developed in the 1950s and 1960s, but it’s on the street you turn off of to get to my street. That street is unpleasant and dangerous to walk on in bad weather or at night and it makes it hard to get into town without a car. But now, we’re getting a sidewalk, and that means connection and walkability.

So doesn’t that prove that I am not a stereotypical suburban mom? Because I want to walk and bike into town. I can wear my yoga mat across my back like it’s a messenger bag.

In other news, one of my students informed me that I am mediocre. I mean, she didn’t say exactly that to me, but I learned it from her. You see, she was assigned, along with classmates, to give a short (3-5 minute) presentation on a topic related to success on which she might like to write her required research paper. So she chose the topic, habits, and from somewhere, she produced a chart, listing on the left, habits of “mediocre people” and on the right, habits of “successful people.”

This chart was not footnoted, no source was named—nor was “success” defined, by the way—so I conclude she drew it up. That is, produced it from herself. And she informed the class that one of the habits of mediocre people is watching TV at night.

Busted, as they say.

Of course, as I have mentioned here in this blog, sometimes I also watch TV during the morning, for fifteen minutes. What does that say about me?

Well, it’s good to have a college first year presenting an opinion as a fact with no source reference to teach me my place.

If only she’d told me this before I had lunch with a few of my high school classmates from our fancy high school a few weeks ago. We shared our confusion about the many messages about being achieving women with which we were inculturated, and how we have tried to fulfill them in our lives, and how that has left us feeling inadequate too often.

The message boiled down to a intensely flavored bone broth*** called, “Be a Superwoman and do it all, otherwise you are a failure.”

But apparently it’s not that Superwoman stock that was a problem. It was a propensity to love British detective series.

Goddam it, I am not a stereotype.

If you’ll excuse me, I have to drive my Prius to the food co-op to pick up some locally made kombucha. 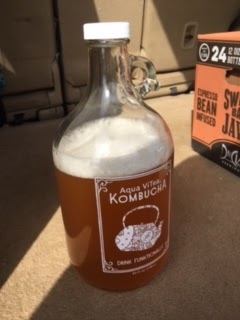 * https://www.youtube.com/watch?v=ZdPdiQNWDeY
** https://www.ncbi.nlm.nih.gov/pubmed/22643754
*** bone broth, by the way, seems to be what used to be called, “soup stock.” But times have changed and now it’s oat milk and bone broth and keto diet and fasting for 16 hours and never watching TV.