Success in AP2—It’s More Than Coping, but Coping is Also Great, Really. I Promise.

Happy New Year, Readers. It’s been so long since I posted to you, I think my chin hairs have turned into a beard. (Shhh, forget I said that; it’s supposed to remain only between me and my esthetician.)

In this new year, Annus Pandemicus 2 (AP2), I offer a couple of tips for success. They’re not mine, originally, Readers, but I’ve incorporated them into my life after so many years of seeking and redefining success that they seem to be mine. In other words, I am probably plagiarizing, but I can’t remember from whose work. Along the way, I have encountered many teachers, gurus, and charlatans offering their worked-over or reworked bits of universally available wisdom. Home truths, if you will. They have managed to publish and profit from these things, unlike me, but hey, this isn’t a post about bitterness. It’s a post about the opposite of bitterness, which is, of course, sweetness.

What makes life sweet? Have you seen the four seasons of “The Good Place” on Netflix? I recommend. Friends, family, self-confidence, generosity, striving to be better, and believing it is possible to be so. These are some of the things that make life sweet. More on that another day, mayhap. Or, if you stop reading here, then maybe you’ve got a little something, a nugget, a kernel to hold onto and work over, something to try to unwedge from your teeth.

I have really enjoyed my break from school. I have to say, it was an absolute pleasure to be done with required reading until the middle of January. During the break, I happened upon a book called The Five Invitations by Frank Ostaseki, a Zen Buddhist who started the Zen Hospice Project in San Francisco in the late 1980s. The Zen Hospice grew out of the San Francisco Zen Center, which, Readers, I visited back in the late 1980s, when I lived in SF. So I almost know Frank. Maybe if I’d actually attended regular meditations at the SF Zen Center, I would literally know Frank. Unfortunately, at the time, I was intimidated by the austerity of the setting and by the little I knew about Zen, so it was another ten years before I got around to meditating.

What attracted me to the book is that back in 2020, when the paterfamilias was still alive but was starting to fail, my friend loaned me a large bag of books about death and dying that she and her mother had read when her mother was dying. I didn’t read any of the books she loaned me, because the paterfamilias failing was something I didn’t really want to grok, if you know what I mean. So the bag sat around for a long time. Eventually, during a culling of our over-full bookcases, I asked the husband to take all the books we were donating to the big donation bin at the library and he accidentally donated the entire bag of books on death and dying that my friend had loaned me.

These books had significance for my friend, because her mother had been reading them in preparation for her own death, and now, in the way of books and people, her mother was gone and the books had remained. I felt terrible. So did the husband.

I’ll just fast-forward to say that my friend is still my friend. She took a philosophical stance about the lost books. She said, maybe now they’re being read by other people who really need to think about death and dying.

I have to add that I did my utmost to try to recover the books, but it was a no-go. So over the last couple of years, I have kept an eye out for books about death to give to my friend.

This brings me to The Five Invitations, whose subtitle is “Discovering what death can teach us about living fully.” Since I’ve broadened my definition of success to include things like “well-being” and “living fully,” this seemed up the ole alley. And you know, a successful death is part of a successful life.

What are the 5 invitations? In brief, they are as follows:

Two, welcome everything, push away nothing;

Three, Bring your whole self to the experience;

Four, Find a place of rest in the middle of things; and

These invitations are essentially the invitation of all meditation practices, the invitation to be present in your own life as it happens, without adding to your misery by trying to prevent or feeling shame about the bad times, and without expecting that life is meant to be always great. Agathism has to take a back seat to reality. Things don’t necessarily always get better. That’s just the way it be. On the other hand, in the midst of any particular moment in life, the possibility exists for feeling pretty okay. As Jon Kabat-Zinn said, any time you’re breathing, more things are going well for you than not.

Did I say this was post about sweetness? Well, I want to talk about the idea of rest. Rest, the fourth invitation, is a kind of sweetness. The sweetness of letting go and just letting the shoulders settle, of shutting the door and enjoying a quiet moment at home.

This idea of resting in the midst of upheaval seems particularly appealing, probably because I’ve been working myself hard in school, while grieving the paterfamilias and the end of civilization as we knew it. While some of my friends have announced a theme word for the year such as “improve” or “strive” or “persist,” I’m drawn to “rest.” Rest does not mean pulling the blanket over your head and waking up when the revolution is over, mind you. It means to find the center—your center—in the midst of upset, busyness, excitement, and goal-pursuit. Rest in the middle of striving, if you will. This is also known, less glamorously, as coping. And coping is really a great approach to life. Coping requires rest.

So what is rest? There are different kinds of rest.

There’s the rest from being awake, also known as sleep. That's physical rest. We are programmed to do this every day for about eight hours. For those of us who sometimes experience less than optimal nighttime sleep, the twenty-minute snoozle is a brilliant restorative in the middle of a day. Physical rest of the body. Obviously essential.

There’s the rest that is residing in the moment. I hesitate to write about this, because it has become a cliché among certain types of people. But there is rest in focusing on the present. Sitting still, taking a breath, and being aware of your body breathing in and exhaling. There’s rest in that, and that kind of rest is super important. Why? Because it gives you a little patch from which to observe what’s ricocheting around in your head and how that ricocheting material affects how you respond outwardly to other people. Do you find yourself swearing at a slow driver? Take a sec, realize that what’s happening now is you’re reacting because you’re late, you rushed, you didn’t take time to prepare. It’s nothing to do with the slow driver, really.

A rest is a pause, a cessation of activity, and pretty much everything wise comes from actions taken from that pause.

Wise Mind is the place you want to learn to use as your base of operations when interacting with others. Wise Mind is the overlapping on the Venn Diagram of Emotion Mind and Rational Mind. 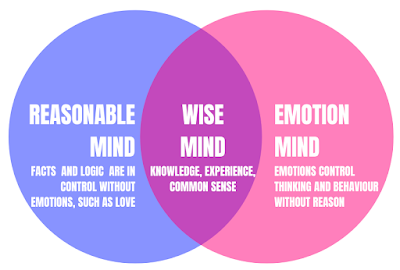 Whereas emotional mind has you deeply in touch with your emotions, when you’re in that state, you’re not acting with any rationality. Likewise, when you’re in rational mind, you’re not taking emotions into account. This is how we get into overwork and burnout, and how we make decisions that railroad over the feelings and needs of others and of ourselves. Wise Mind combines the best of rational and emotional states. But you have to practice getting there. The best way to do that is to rest, to pause, to settle into the present moment, and to observe all the things that are ricocheting around you, internally and externally.

(Wise Mind, by the way, is a term coined by Marsha Lineham, who developed a kind of therapy called DBT (Dialectical Behavioral Therapy) to treat people with major issues in relating to others. Guess where some of her ideas came from? Buddhism and mindfulness. Her therapy helps people learn social and interpersonal skills in conjunction with talk therapy.)

How do you get to Wise Mind? Practice, practice, practice. More specifically, you get to Wise Mind by taking a rest in the moment, pausing to observe what is going on with you. There’s the rest from accepting whatever situation in which you happen to find yourself. Are you in the above scenario? Why make it worse by getting even more agitated about being late? Why berate yourself or others? Why not take a moment, accept that this is what’s happening: you are rushing, it happens; next time, perhaps you can plan better, but maybe you are doing the best you can because maybe something came up, right as you were getting ready to leave. The point is, rest in the uncomfortable truth, and it alleviates some of the your discomfort. There’s the rest in not piling on guilt or a sense of shoulda-coulda-woulda to a difficult situation.

There’s rest that means acceptance. This is the rest of letting-go. This rest means accepting what is happening when you can’t control it, for one thing. It also means accepting yourself, with all your foibles, is another. Are you the type to get your proverbial panties in a twist over stuff that doesn’t stress out most of the people you know? Don’t make yourself feel worse by should-ing yourself about not being so uptight. Just own it, you are uptight. This has its good and bad aspects, doesn’t it? Maybe all those laid-back others in your life depend on you to think of the details. So, accept that aspect of yourself. Radical self-acceptance, baby. If you remove the layer of non-acceptance of what is, you have a better chance of seeing clearly. Maybe there’s something a bit pathological about your need to control, but you’re not going to be able to change it without looking right at it. You’ve got to rest with it. Rest with it before you wrest with it.

I couldn’t resist the pun.

Rest can be as accessible as a sigh. At any time, a deep breath provides an instant of rest. It’s not necessary to wait for a vacation to rest. What is necessary is to rest a little bit every day. As my final semester of graduate school ramps up, I plan to remember to rest more, so I can operate from Wise Mind and cope with the vicissitudes of AP2. Bring on the variants!

Posted by Hope Perlman at 3:41 PM No comments: