Hello, Readers. What’s new? I know,  nothing much. Truly. Come to think of it, that’s a wonderful thing to be able to say. Nothing is new. We are still here. Still safe. Still healthy. Yes, it’s tedious, but also, isn’t it just a joy? Isn't it just wonderful? Isn't it just the silverest of silver lingings?

Too much? Too zesty? Too Pollyanna? Have you ever seen the movie about Pollyanna? I believe it is called “Pollyanna”and stars Hayley Mills. Boy, is she annoying in the film. I don’t recall all the details, but by golly if she doesn’t make the best of just about everything. Every shitty thing that happens to her. Her leg breaks? Bummer, but she’s got lots of time to read, now! And so on.

You know the type.

The other day, I was Zooming with some friends and we all agreed that whatever initiative and enthusiasm with which we had initially approached this stay home business had dissipated.

Dare I say has flattened? The curve of initiative?

You know, after the initial disbelief that this was really happening, then being floored, we all decided we were going to learn Spanish or clean out our closets or finish up our projects in a frenzy. We were going to empty those junk drawers and learn to subsist entirely on almost-expired foods in our pantries and be better for it. We were going to darn those socks and hem those pants and write those novels. We were going to work out like demons and emerge from quarantine as sleek as dolphins.

Well, it turns it, many of us are not. We are just existing. Sure, my friend A is working her way through her unfinished projects, but honestly, she was project-based all along. Another acquaintance is planning to finish all her unfinished quilts and is posting photos of them on Instagram. So we shall see. I believe they are the exceptions. A few days of over-filled trash and recycling bins followed by several exhortations from sanitation workers not to overwhelm the trash collectors, because they were just trying to stay safe themselves, were enough to convince me. I heeded such pleas. I put aside the idea of going through the closet with all the old pool noodles—no, I do not have a pool—and Ogosports sans balls and ten year old sidewalk chalk nubbins.  It was only my civic duty to leave the mess where it is for now.

What I have done instead is I’ve been downloading TV apps with their free trials, knowing full well I’m never going to remember to cancel them when the free part ends. Since then, I have churned through season one of “Agatha Raisin” on Acorn TV. Life in a beautiful town in the Cotswolds with an amateur detective woman of a certain age with humorous sidekicks is just the thing, it turns out, to defray an anxiety attack.

Actually, what with all the fabulous free meditations and dharma talks the senior Buddhist teachers are giving every day, I am feeling pretty good, anxiety-wise.

In other news, I have responded to all of my students’ emails, but have not graded a single essay. I’m thinking of just giving everyone an A and flattening another curve. Partly, because I think they’re all shell-shocked and should be put on a pass/fail basis this semester, but their college disagrees, and partly because, as someone rough from the Cotswolds might say, I can’t be arsed.

Truly, I cannot be arsed.

Oh, and in other news, I scraped my thumb. (It happened two days after I cut the tip of my index finger with the chef’s knife. That was just a teensy cut, and we were having a tomato sauce that night anyway.) But then I scraped my thumb and it was just in the exact place to keep opening up and bleeding for the next thirty hours or so (But who’s counting?) and I have to say, this little injury, which was really minor, pretty much brought me to tears constantly. Tears of rage. Tears of self-pity. My water table is just that high. I mean, sure, those niggling minor injuries always cause a burst of fury, and they often prove so much more painful than they should be. However, this one caused such an extra response from me. I chalk it up to having a very low threshold for upset these days.Or an over-active trigger point. These things take energy, too, you know. Flatten the curve of upset.

Speaking of chalk, chalk was one of the the things in that spare closet that I was going to chuck. Decade-old sidewalk chalk stubs. Who needs ‘em? However, am I glad I have them still, because I can go out and chalk the driveway with a big ole S. O. S., so maybe a Scandinavian airliner flying overhead can send down a rescue basket and whisk us off to a better-run country than ours.

Too negative? Sorry, I should have said we can use the chalk to chalk a big ole rainbow on the driveway when the weather warms up. Solidarity and all that.

I am glad my kids are older now. They can take care of themselves. They can bake, I probably mentioned. And sometimes they can walk the dog or empty the dishwasher. As I told my beloved cousin L, I wish I could be the quirky fun mom and come up with great reasons to hang around me and stick together during this, but what I really want to do is flop on the couch and watch another episode of "Agatha Raisin". Sometimes they sit with me and scroll through their phones at the same time. That counts as togetherness and fun activities, don't you think?

Which reminds me, here’s another thing I’ve been doing.  I have been eating lots of delicious, homemade goodies. So there’s a curve I won’t be flattening, and it’s on me. 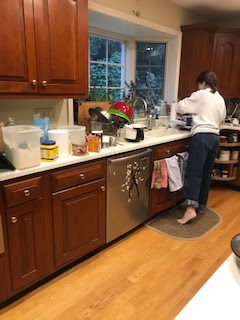 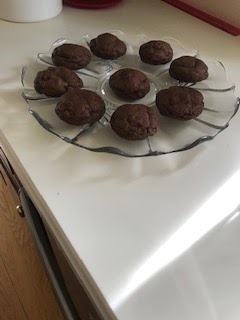 Sometimes success is about knowing how to let go.

Yup, that’s about it for me, Readers. How’s things with you?
Posted by Hope Perlman at 11:00 AM No comments: