Welcome, Readers, to my disjointed blog post. Highlights of the week include the following:

*  Reader comments on my last blog post set me off on an hour of Internet research on Spiral Dynamics. In brief, the idea behind Spiral Dynamics is that human (and societal) development can be described as a spiral of inter-related, but still hierarchically arranged characteristics. Each level has a color ascribed to it, and my thoughtful commentor told me he (pretty sure he) thinks I’m between Green and Yellow. Well, that left me no option but to find out what that means. And it means that I am poised at the brink of the second tier of development, between levels 6 & 7, just one level more above me, although there is the possibility of more as yet undiscovered levels. Heady stuff. Possibly I might become a Spiral Wizard, which can only be a good thing – unless it’s a terrible thing. One critic, according to Wikipedia, decries the whole Spiral D as hierarchical in a bad way, leading to Nietszchian ubermensches, and we know where that ubermensch stuff leads….straight to Auschwitz.

One of the summaries of the book on Spiral Dynamics was written by someone at the Esalen Institute, so I knew for sure I was in the land of alternative theories. Esalen is known as a center for “realizing human potential,” and is one of the main homes of New Age.  I went to Esalen in the late 80s, out of curiosity. It is gorgeous. Prominent memories are: 1. Large naked hairy man spread-eagled prone in a mineral hot tub overlooking the Pacific. 2. Eating meals in silence.

*  I poisoned the dog. Yes, I forgot that the lawn people had been at the house, spraying their so-called organic and environmentally friendly fertilizer and herbicide, and let the dog out. I was trying to do the right thing and play with him by tossing a ball for him, and watching him pick it up, lope towards me, drop it, and munch on grass, before the husband and I left him alone while we went out for dinner. We returned to a scene that I won’t describe, and ended up on the phone with animal poison control, who told us the dog would be fine, that those particular earth-friendly lawn care ingredients would only cause him an upset stomach. Uh, yeah. Also, it didn’t help that the rising 10th grader said she would never believe anything I ever said again about caring for the earth and not using bad chemicals…..To which I could only say that these friendly chemicals only caused the dog stomach upset, not neurological impairment or death. Still, I felt terrible, and suggested to the husband that he give up his secret competition with our next door neighbor over the lawn and let the crabgrass and clover grow. He’s never going to out-grass Tom.

*  On the plus side, the pachysandra has completely recovered. And I can prove it. The roses, alas, have mostly succumbed. I promise to find some kind of literature about how to care for the remaining two bushes.

*  After over three weeks of eagerly scanning the camp’s website for photos of the rising 6th grader, mostly to no avail - "look, dear, I think it's her leg!" -  we will be seeing her tomorrow! I am very excited, and not only to fact-check her claim, written in several letters to family and friends, that she has 104 bug bites. So there goes the argument that summer camp is bad for kids because it’s yet another regimented, over-scheduled program. Clearly, my child has had plenty of free time.

* Zimmerman acquittal. Ugh. I feel it’s one of those times when joking about other stuff and being inconsequential and silly is not appropriate. Unfortunately, being inconsequential and silly is really my strong suit; whereas what’s needed now is some kind of Nelson Mandela-like vision of a better future. I guess I think our political-legal system is somewhat self-correcting, although unfortunately not without a lot of discomfort and violence along the way. There are bad laws, and they can be struck down. I am ready to march.
Posted by Hope Perlman at 7:38 PM No comments: 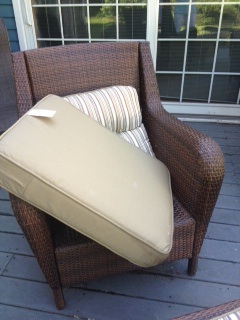 Well. What do you think, Readers?
Posted by Hope Perlman at 5:29 PM 4 comments: