“…thou wouldst be great, art not without ambition; but without the illness should attend it….” Macbeth I:5

So here’s where I have to talk about ambition. I have to talk about it, considering where I left my last blog post. “What if reach exceeds grasp?” One person commented, a question I was already considering, just as I was aware of a depressing sidebar to the idea that feeling successful means achieving an intersection of capability with desire. I admire these friends who seem so comfortable with themselves that either they can accept their limitations; or they are so self-confident they don’t need to prove the upper limit of their ability. Are they aliens?

Another friend, an artist, had already poignantly expressed the truth that in creating art, success may be a fleeting feeling, quickly replaced by the need to improve upon what failed in the last creation.  (And let me note here, that I extend “creativity” to all endeavors that require synthesis; the arts are obvious, but the sciences, and plenty of other careers or callings require it.) 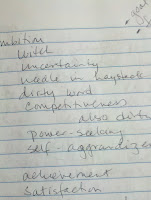 Oh, how I’ve hated to talk about ambition. Maybe it’s because when, a few weeks ago, I brainstormed about it in my notebook, the first things I wrote down were all negative:”witch,” “dirty word,” “self-aggrandizing.” I don’t know why, I truly don’t. But I have to face it; I’m more ambitious than I realized. (Of course, said my sister the psychologist, that’s the source of your problem.)

Why the negative associations? I mean, both my parents--all my parents--were/are professionals. My mother was an economist, my stepmother and father  lawyers. Going back a generation they were all professionals, too: physicist (grandmother), lawyers, a federal judge. My father’s mother was the second woman to graduate from the University of Pennsylvania Law School. I was primed for an ambitious career.

I even gunned the engine right out of college, starting as a receptionist at a law firm, being promoted to paralegal within weeks (dressing for the part, etc, etc.).

I hated that job, oh how I hated it. No blocks of free time in the afternoon. I might have gone to law school anyway, though, if my parents hadn’t dissuaded me. The practice of law has changed, they told me. It’s not the way it used to be. Don’t do it.

Zero encouragement. My engine sputtering, I asked what I ought to be. Civil Engineer. Stock broker. Accountant.

Seriously. These were their suggestions. Nothing aligning with my interests. Not a word about the written word. Stalled.

Not that I blame my parents. At least not in my rational brain.  I think, though, my subconscious got the message of their silence, and it’s been a long, LONG time my writing ambition has been working it’s way up and out.

A word about Ambition versus Goal. I've been writing as if the terms are interchangeable, when they're not. Maybe ambition is a driving force, and goals are concrete achievements. Parsed that way, then, you know, you can feel successful when you’ve achieved a goal, while understanding the need that drives you onward to new goals is ambition. Maybe I’m just going in circles here. I'm trying to figure out how some people can achieve their ambitions and their goals, while some people keep gunning past goal after goal, fueled by ambition. My friends who feel successful lack nothing in the brains department. So what allows some people to feel successful is not so much the intersection of capability with desire as it is the intersection of ambition
with achieved goals. Those lucky folks aren't hung up on proving themselves. Clearly, as my 8th grade friend put it, some people are just more ambitious than others. Sadly, I must be one of them. Oh dear.

Returning to the question posed by my reader. What if reach exceeds grasp? Well, I guess that's the definition of ambition, that's all. Not a referendum on talent, intelligence, or success, for that matter.  Maybe it’s a new Laurie Anderson tune. Not Walking and Falling, but Reaching and Failing.
Posted by Hope Perlman at 12:45 PM