Consistency: The Peaks and Valleys Challenge

Readers, I have been to the peak and to the valley this week. I much prefer the peak.

In case you were wondering how my 66-Day Challenge chart is doing, I will show you. But first, let me tell you about my week.

But before I tell you about my week, I have to tell you about a book I read a couple of months ago. It was a memoir by Donald Miller, A Million Miles in a Thousand Years. Or possibly A Thousand Miles in a Million Years. I can’t remember. I heard about it from someone on the Internet who posted a list of her favorite memoirs. Anyway, it was a good memoir, about Donald Miller’s life, about how a filmmaker contacted him about making a movie about one of his previous books about his life. The filmmaker and his cinematographer and Donald Miller spend a lot of time together, and they tell Donald Miller about this seminar called Story, taught by a famous teacher, Robert McKee. McKee is this guru of the film and TV writing world. Everyone famous goes to his seminars. So Donald Miller goes to it, too, and the memoir A Million Miles or Years turns into a book about writing a story, too. There’s a funny bit about how Donald Miller fills almost an entire notebook with notes during the three days of seminar, while his roommate, who also attends, leaves with this: A story is about a character who wants something and overcomes obstacles to get it. Or so. Anyway, reading about the seminar piqued my interest, because I also like to tell stories in writing, and I’m kind of bad at the plotting of stories. My novels have foundered on this.

So I looked up this seminar Story, which Miller described, and discovered that the famous guy who teaches it four or five times a year around the world would be teaching in New York City right around now. It was expensive, but not out-of-the-question expensive. So I talked about it for a while. I talked about it with the husband, who encouraged me to do it. But I didn’t sign up. I talked about it some more. I googled it. Is the guy who teaches it for real or a crook? Is the thing actually world famous, or is it just a line, like “Going out of business. Liquidation sale” on one of those stores that never closes? It just hangs the sign there permanently. I didn’t sign up.

I asked the MIL if I could stay with her while I took this seminar, and she said yes. I still didn’t sign up, though. What about the 10th grader’s eye appointment on Friday? What about my hair appointment on Thursday?

What if attending this seminar poisons whatever intuitive sense of narrative I have and I feel oppressed and start writing by the numbers?

Maybe that would help me sell my writing.

I told myself it’s good to learn theory. It doesn’t mean I will be a slave to it. More likely, I will assimilate this knowledge the way I assimilate all knowledge. I will suck it in and it will turn into a sludge pile somewhere in my unconscious, or my subconscious, and will become part of the intuitive process.

I texted my cousin’s son who works in LA in the business, but he didn’t text back. I thought he might have insider information, and he might, but I haven’t heard yet. Still I didn’t sign up. But finally, on a Thursday, after walking the dog and listening to a podcast on which Dan Pink mentioned the importance of telling a story in all kinds of work, I hit the tipping point that sent me home and got me to register for the seminar. I even bought the train tickets.

So I went to the seminar, and it was sublime. Fascinating. Exhausting. Three days of lectures, starting at 9 a.m. and ending at 8 p.m., with three twenty minute breaks and one hour for lunch. I learned a lot about structural analysis of story, and it made me think about my current and past books in a new way. I also met some fascinating people, from all around the world. A TV producer from Finland, a marketing executive with a desk drawer screenplay from Toronto, a textbook writer and YA novelist from England, a TV writer who does something I’d never heard of called Second Screen writing for TV shows who wants to write her memoir about transitioning to female, and a prolific and famous writer of nineteen novels. We all felt the seminar was transformative.

I also delighted in the lattes with oat milk I’d read about months ago and was finally able to try at the cafe on the corner.

I arrived home at midnight on Saturday, and by 1 am, was trapped in the valley. The 16 year old became terribly ill, all night, and ended up in the ER the next day. The husband spent the afternoon and evening in the ER with her, and when they admitted her, I spent the night in the hospital. By the time we got home Monday, all memory of the seminar was as remote as if it had happened ten years ago, or possibly to someone else, on a TV show.

But the 16 year old is fine. As I write, she’s playing tennis. And after a few days away, for the seminar, which I counted as writing days, and for her illness, I am back to my 66-Day Accountability worksheet. 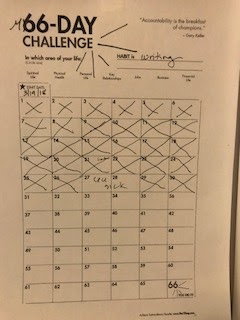 Posted by Hope Perlman at 6:00 PM No comments: