Worldly Success and the Artist 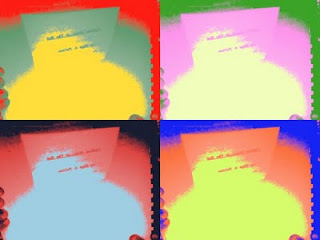 A friend subdivided success into public and private realms. The public realm is the one I need to talk about right now. Feeling successful in this realm, my friend said, means feeling on par with your peers, and doing the things you're supposed to be doing at the time you're supposed to be doing them. Going to school, starting a career or getting a graduate degree; finding a mate; creating a family; owning stuff. We're not entirely sure about the next Shoulds, but they're on the horizon.

I thought this definition was useful -- to the degree that it was not useful to me. This definition of worldly success is the one I was raised with, and the one that's made me feel most like a failure. It's an upper middle class definition. At times I've worried that to be a successful artist a person must hail from either lots of money or from none to possess either the insouciance about position or the desperate ambition to attain it necessary to persevere in the arts. The upper middle class is not the place for experimentation, as experimentation puts you right into conflict with security and direction. In my 20s it was fine to be working at a menial job and writing, even if some of my friends were climbing various professional ladders. I wrote a novel. Seemed legitimate for a twenty-something. A novel was good. I sent it around to about ten to fifteen agents. A few read it, and one, who is actually and truly a very famous agent, ALMOST took it. But she didn't. I was crushed. Single, still working at a menial job, and close to thirty. Meanwhile, in the years I spent writing that novel, friends who had started in menial jobs along with me now had promotions and advanced degrees.

Life history follows, and I could go on and ON. My point is that the linear, clear-cut ladder of success doesn't work to the advantage of artists. Duh, you're saying. Well, it's one thing to know that, another to FEEL it (as those professionals like to say). Artists wander off the path, or get stuck on a rung near the bottom. Arranging a life to create art doesn't leave the energy a professional needs to succeed at law or medicine or business or teaching or engineering.  One of my priorities for a job, I used to joke, was that it give me "blocks of free time in the afternoon." Thus, the menial work. It left me brain power for my writing. What it didn't give me, though, was a sense of pride, a sense of progress, or significant money beyond basic living expenses.

I was creating art, though, you might point out. Well, true. But my art wasn't giving me any of those markers of worldly success either. In fact, I was embarrassed to talk about my writing, since the obvious follow-up question to "What do you write about?" is always, "Are you published?" So I took my writing down a notch or ten or twelve on the priority list, and went to graduate school. I became a teacher. Another extremely valued, prestigious, and well-paid career choice. Nevertheless, it was a relief to me (and to my family) to have a profession, capital-P. I tasted what life would be like without this other thing calling to me, without the secret and shameful wish to be a writer, capital- W. And actually, although among certain professionals, teaching is held in low regard, in my circles, teachers were pretty darn cool.

However, there were absolutely no blocks of free time in the afternoon. There was no energy left. There was no room in my life for writing. I was a successful Something, judging by my peers, but that something wasn't the thing I wanted to be. Is that compromise worth making?
Posted by Hope Perlman at 11:24 AM