Trusting that You Care About My Thoughts (Excuses)

Then, just when I thought I was getting myself together, the husband fell apart. Appendicitis. Appendectomy. Hospital stay. Thank goodness for friends, who took the kids and fed them and offered them shelter for the night, and who walked the dog, and mowed the lawn. And thank goodness for morphine. For the husband. And Xanax. For me. Because, in case you hadn’t heard, hanging around the emergency room is a real blast. The sounds and sights of psychotic breaks, the hacking and barfing, the suicidal teenagers. I’m not cut out for that crap. Although I was prepared for the shackled prisoners and correctional officers because I watch “Orange is the New Black.” And the husband on post-op meds was kind of amusing.

I might as well come clean. The other thing I’ve been doing is ordering a lot of clothes online, trying them on, finding they don’t fit, and collecting the boxes to send back to the store. Who has time to write a blog when there’s a Diane Von Furstenberg wrap dress half price at Nordstrom, and it fits - but the 15-year-old objects to the eye-popping graphic design? This eye-popping graphic design might be the reason the DVF classic wrap dress is half price. It just might be too much for my 5’1.25” self. But I can’t decide. Not deciding takes time. And I have to wear Spanx to try on the dress – and Spanx take time. And in short, I haven’t shown the dress to the husband or the 12-year-old yet, because there has to be a moment when the lighting is good, I feel like rolling on the Spanx and wrapping the dress, and the moon is in the seventh house - and moments like those are few, especially when one or the other of us insists on falling apart periodically. It’s hard to fit it all in.

Also, the 15-year-old left for her summer dance intensive earlier in the week, and preparing for that took a lot of time. The preparations also encroached on my workspace – the dining room table. There were a lot of leotards. A lot. I was thankful that she could travel with a friend and the friend’s parents. Since I have that meager paying work, it was not a good time to fly south myself. However, I spent a lot of time and energy feeling guilty that I wasn’t going and guilty that I was relieved not to go. These emotions required naps to alleviate. You know how it is.

Since I’m clearly not one of those single-minded, monomaniacs driven to pursue one goal nonstop, I didn’t squeeze efficient writing work into all spare moments. I used those for surfing the interwebs. And for watching “Orange is the New Black” with the husband.

Now is the time of year when I usually post something complain-y about my garden. Well, this year I’ve had the perfect excuse to let everything go to hell. The husband’s appendectomy. However, that was two weeks ago, and now the weekend approaches and there are so many weeds. Just so many. I might as well report that I haven’t been totally negligent about the garden. However, I seem to have killed a hanging basket of something lovely purchased at the farmer’s market. Also purchased at that market: four baby kale plants, which I planted. Yes, I did. I planted them among the surviving rose bushes that once lushly flanked our patio. The next day I noticed that the little plants were leafless nubbins. And the day after that, I saw a cute little bunny loping past.
Tularemia, I thought. (Google it.) I used to love bunnies, but not now. Tularemia. I think I’ve mentioned before that I ought not to read the Diagnosis column in the NYTimes. Yet, I seem unable to resist it.

To plant those kale plants for the bunnies, I had to weed part of the rose bed. Even though I wore gloves, I developed some kind of itchy rash on my arm from something nasty. So, forgive me if I’m just not that enthusiastic.

I have to say that I do love a garden. I even love planning a garden. It's the gardening part of gardens that I find troublesome. So the husband’s surgery has been a handy excuse in that arena. Silver lining and all that. However, now he’s better, and the weeds are bigger, and the weekend’s approaching, and there are no more good excuses. Except –hey, I have one: I’ve gotta work on my book!

Well, I've been dragging my feet about publishing a new blog post. Maybe it’s just time for a quick update on what I’ve been doing instead of working on my success book. 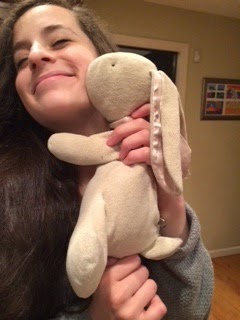