Scaffolding of Success: Centering. And Death.

Oh Readers, my GR interview is almost ready, but not quite. I am waiting for the best place to put it for maximum exposure. In the meantime, let me enrich you with a little example of my success scaffolding in action.

One of the planks of my scaffolding of success is mindfulness. I’m actually going to change that to centering. Centering is one of the planks in the scaffolding of success. Not everyone likes meditation, but everyone likes some kind of centering activity that tamps you down when you want to fly out of your skin and brings you back to a more peaceful place. Yoga, exercise, singing, a walk outside, and prayer are other examples of centering. Well, centering came into play this week.

You see, I fell down the black hole of pondering death. Why? Well, why not? Or - because I had to have this tiny skin cancer removed and it triggered - trigger-warning - fear of death. Although, come to think of it, there’ve been other triggers around here of late. Last week something bad happened to a neighbor, something involving an ambulance. One of the children? One of the parents? I don’t know, because I don’t know the neighbors. They are pretty new in the neighborhood. I left them a note, but I haven't heard a thing. The situation makes me a little sick.

Okay, so I’m a hypochondriac. I’ve earned it. People I loved and depended on have died, more than one of them. But especially my mother. I’ll admit it freely, her death did a number on me. I’m what they call "anxiously attached” to the people I love. This is basic attachment theory. Just ask my sister the psychoanalyst. Or trust me. I read three volumes by John Bowlby on attachment theory when I was working at Widener Library. It wasn’t part of the job. The job was data entry; but the perks were grand. All kinds of books filtered past my desk. Some of them stuck around for awhile. For example, the works of Bowlby (1907-1990), known for his Attachment Theory. So you can trust me when I say I’m anxiously attached.

And one of the things I’m anxiously attached to is, well, life. So when I get a little something that needs to come off, suddenly, I am under a cloud of imminent death. I try to remember the wise words of high school acquaintance Victor Tolken (Class of 1981? 1982?) who said, “When I’m dead, I won’t care.” This gave me the most blessed moment of release from my anxiety (which was plaguing me even back then, in high school). Yes, right, I thought. I’ll be gone and I won’t care. So it’s the dying I fear, not the actual death. This sustained me for a good while. Otherwise I probably wouldn’t have tried some of the things I tried in college. Ahem.

Of course this calculus changes when I consider my progeny. I may have f-d them up. I will cop to a certainty that I have indeed f-d them up in some way or another, just by being a fallible human. But if I die before they grow up, I will have f-d them up in an irremediable manner. I cannot do that. So now, unfortunately, it is both the dying and the being dead I fear. Victor, where are you?

My point is, despite joking to the husband that I had to go to the plastic surgeon on Monday to get my throat slit, and then making disparaging remarks about being trussed up by the legs and turned upside down over a bucket - so I would be kosher, at least, I was kind of wound up through the weekend and into the plastic surgeon’s office.

Let me take a few words to recognize that I am one lucky person, having only to worry about a little skin thing, and that I am fully aware that right now there are people facing much worse problems and much more immediate threat of death. I know this. And now you know I know this. Nevertheless, this is what I was dealing with.

The thing about the anxiety was this. There it was, inside of me, consuming me. A big ball of it, expanding and crushing me. I wanted to take it out. I wanted to give it to someone else. I wanted to hand my big ball of anxiety to someone else - okay, to the husband (poor husband) - and for the someone else to say everything was going to be alright. But the thing was, everyone had already said it was going to be alright. There has not been a single doctor who has said anything other than that this little skin thing needs to come out and then it will be all gone. So there was some other thing going on.

The other thing was that just as death comes for the archbishop, death comes for us all. Maybe not now, in this little skin cancer, but definitely at some time. That’s the real problem. The problem of death. It’s the kind of thing Buddhist monks meditate on, sitting in graveyards and outside of charnel houses; but I am not a Buddhist monk. I’m not even a Buddhist. I’m kind of an atheist JewBu. This means I get all of the neuroses and none of the reassurance, in other words. There is, sadly, no one to hand over this particular anxiety to. Because no one can solve it.

Fortunately, the last time I saw her, my friend Jo made me a beautiful necklace that is also a set of mala beads. 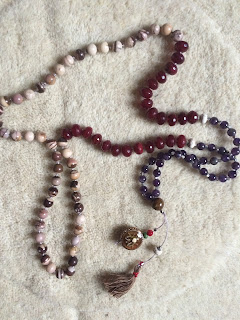 She is amazing, isn’t she?

She also made these earrings: 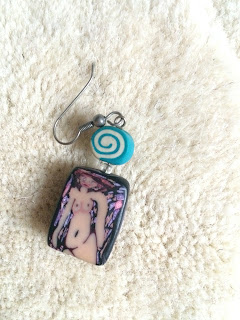 Anyway, I’m not really a talisman sort of person, but I wore the necklace to the plastic surgeon’s office, and I held it in my hand while he numbed my neck and prepared to kosher me. The beads helped me remember that I am a person who meditates. This means that I am a person who sets aside a particular amount of time several days a week to sit on a cushion and try to pay attention to my breath. To try and to fail and to try again. That is what I mean by meditation.

So I did that while the doctor removed the little skin cancer and stitched me up. I noticed my heart felt crushed and pained with anxiety and beat rapidly in response. This added another layer of anxiety about my heart exploding. I reminded myself that anxiety is just an emotion, and just because I feel it, doesn’t mean there is anything more to the feeling than that it is there. I reminded myself that behind the cloud of anxiety was clear sky. The anxiety would pass. It didn’t pass then, Readers, but at least I was able to see around the edges of it. Pema Chodron would be proud of me. Then the doctor applied a bandage and brought me a hand mirror. The gigantic slit I’d been picturing was a small thing, hidden behind a steristrip. Then I got dressed and left. I still have to wait another week for the stitches to come out and the pathology report, but I feel much better.

This is the scaffolding of success supporting me.