It’s been a long time since I’ve blogged about Stephen Covey and his 7 Habits of Highly Effective People - “effective” being a euphemism for "successful". Why a euphemism? Is there something inherently shameful about seeking success?

Don’t answer that.
We don't seek success, Readers, we pursue lives of principle and passion and success is the byproduct.

The point is that in writing my book draft, I’ve been revisiting some of the books I’ve read on success, and this week, I’m reminded of Covey’s Habit # 7, called “Sharpening the Saw.” According to Covey,

Habit 7 is the habit of renewal - a regular, balanced renewal of the four basic dimensions of life. It circles and embodies all the other habits. It is the habit of continuous improvement that creates the upward spiral of growth that lifts you to new levels of understanding and living each of the habits as you come around to them on a progressively higher plane. (p.52)

The four dimensions are not an early 70s soul group. They are not geometric representations of space and time. They are not the four elements - earth, air, fire, and water. No, they are physical, social/emotional, spiritual, and mental. 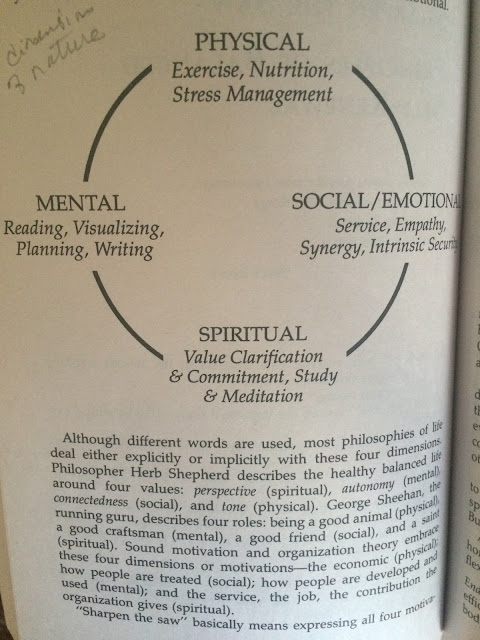 In other words, you need me-time.

Well, for my me-time, I’m starting a drawing class with the 8th grader. She made the mistake of - or good decision to - sit out the spring semester of the theater class she has been going to for a few years, because she would have had to miss several sessions, due to various scheduling conflicts. This left her in a dangerously underscheduled situation, which I quickly attempted to rectify, because all children must be scheduled up, like loaded human stress-guns.

No, really, it wasn’t like that. It was that at the same time she decided to skip the drama class, she said she might like to take an art class, because the vagaries of our public school schedule have left her with only one quarter’s worth of art for the entire 8th grade year.

No, really, it wasn’t like that. It was that the class is kind of far away, and we parents would have to schlep back and forth on Wednesday evenings to drop her off and pick her up. And then I started thinking about drawing and drawing from the nude and how I loved to do that once upon a time, and I thought, why not? Why not just take the class, too? That way I’ll do a service to the environment by eliminating a round trip to Troy. Not only that, I’ll do a service to myself. I’ll be Sharpening the Saw, according to Stephen Covey. I’ll be Filling the Well, according to Julia Cameron of The Artist’s Way, who says that creative work should involve some cross-training to keep the creativity flowing. All in all, no matter how you look at it, it’s a win.

Except maybe for the 8th grader. But I’m grateful she has agreed. I’ve promised not to look at her or talk to her. And since my last name is different from hers, she can pretend she doesn’t even know me.