It's a Wonderful Failure!

“Remember, no man is a failure who has friends.”

This is a final piece of advice from Clarence the bubble-nosed aspiring angel to George Bailey in that old classic movie, “It’s a Wonderful Life.”

I’ve come to the conclusion that the film is like a Rorschach Test for your psychological state. The first time I considered this was when my stepmother saw what I was watching on TV, rolled her eyes, and totally harshed on my happy with a bitter, “I can’t stand that saccharine creation.”

Since then, I’ve watched the movie many times - “Mr. Martini, How about some wine!?!” Sometimes I think it’s, well, wonderful; sometimes, it makes me want to kill myself.

Poor George. He’s gone deaf in one ear from an infection, and has been left behind in Bedford Falls, when all he ever wanted to do was go out and explore the world. He has plans. He’s going to college, then he's going to build things. He doesn’t want to be “cooped up for the rest of my life in a shabby little office.” He wants to do something “big and important.” He’s going to “shake the dust of this crummy little town off of my wings.” Alas, his father wants him to come back and work in the family business, the Bailey Savings and Loan. It's possible he knows he's about to keel over from a stroke.  Instead, George's younger brother Harry gets to college and beyond, while George gets stuck with a drunk, incompetent uncle, a failing bank, and a shambles of a house, along with a passel of kids and a wife (who is undoubtedly pretty, but looks aren’t everything. Lucky she’s got the good stiff upper lip thing, too.) He feels like a colossal failure. And then when Clarence (Angel, Second Class, lacking wings) comes along to help him see how good his life is, well, sometimes, Readers, I can’t buy it. Because the only way George can come to see his life is wonderful is by giving up on his dreams and accepting his reality. This sounds like a meme: The secret to success is wanting what you have.

But, I am happy to report, this is one of the years that I find this movie sweet and inspiring.
And I love the final lesson: 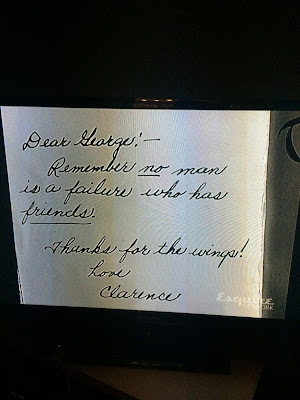 It is certainly true. I'd be nuthin' and no one without my friends, and I feel that you, Readers, are among them.


I hope you have a happy new year, surrounded by friends.
Posted by Hope Perlman at 7:54 PM

Email ThisBlogThis!Share to TwitterShare to FacebookShare to Pinterest
Labels: failure and success, friendship, It's a Wonderful Life