Oh, hello, Readers. It's kind of grim out there, don't you think? Shootings and bombings and bombast and rain. Well, I don't want to be grim. Or deep. One commenter on the blog said my blog was the deepest she'd seen in a long time. I suspect it wasn't actually a compliment - although I took it as such for an hour or so. It might actually have been code for, "Wow, this blog is a slog." 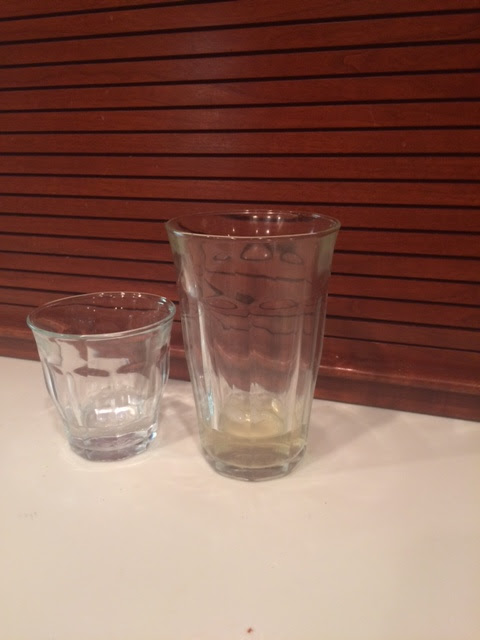 See the big glass? It's mine. I keep a big glass, usually with water, good old H20, next to the fridge every day. Lately, little glasses have started to appear next to my big glass. Someone in the family, one of the offspring, has picked up my habit. That's cute, don't you think?

Or maybe it's not so cute. It's certainly illustrative of the corollary to the maxim, "Do what I say, not what I do." The corollary is something like, "Kids learn from what you do, not from what you say."
In this case, no harm done. I'm demonstrating that you don't need to take a clean glass from the cupboard every time you need a drink of water, as well as the importance of regular hydration.

Now if you're peering closely at my glass, you are correct, that is not water in there. It's kombucha. This weekend I had coffee with someone who didn't know what kombucha is. My explanation wasn't very enticing: fermented tea and something about The Mother, which is the starter for the kombucha. Just as sourdough bread has a starter, kombucha has one, too. The bread starter is fermented yeast. The kombucha starter is fermented tea that turns into really a very disgusting, mushroomy-looking thing. You can make kombucha. After every batch, just like sourdough bread, you have to save a little bit of starter - The Mother - to make your next batch. I know this because once we had a hipster twenty-something stay with us. She was perambulating around the country with a jar of kombucha and a camera. When she left, she left me the recipe for kombucha, as well as a jar of starter in the fridge. It was not pretty. It looked like a giant fungus, which I believe it indeed was.

If that wasn't a deeply symbolic conversation, I don't know what would be.

So I buy my kombucha bottled. It's kind of fizzy. I like it mixed with seltzer. I drink it and I feel like I'm being productive. It has lots of probiotics, which are very in, hip, and now - and also very 1970.

This weekend I also had coffee with someone who didn't know what absinthe was. Okay, it was the same person who hadn't heard of kombucha. I was like, you know absinthe: the green poison - wormwood? Toulouse-Lautrec? French Impressionists? Paris, 1880s? Oscar Wilde?

This was during a conversation in which my companion told me she was pretty naive and always had been. By the time we got to the question of absinthe, I believed her. But then I thought about why I know what absinthe is, and I thought about how, in high school, I used to say - rather, I used to pronounce - "I may be innocent, but I am NOT naive."

I'm sure I was extremely irritating when I said that. I know I was not entirely correct in that self-assessment.

Pondering what I've modeled for the offspring besides saving glassware and remembering to hydrate. Scary.