The Rotating Drill Bit - Or, How to Successfully Deal with Drama

“So who brings the drama?” My friend E asked before I left for vacation - excuse me, I mean, our trip. There’s an article making the rounds titled something like, “Trip or Vacation,” whose bottom line is that if you are driving, going with family, taking kids, or staying someplace with a kitchen, then you are not on vacation, you are on a trip. Which means that I have been on only 1 (one) vacation since I got married, and it was last year, for my 50th birthday, our trip - I mean vacation - to Italy.*

But that distinction doesn’t really matter. While it’s all very amusing, what makes a vacation a trip is probably drama. Can I talk about drama? What do I mean by drama? I don’t mean obvious drama, at least not usually obvious. I’m not talking door-slamming, yelling, face-slapping surface drama. Not in my nuclear family of origin. With the stepmother out of the picture lately, at least, there’s only the quiet ripples of the drowning man who slips away without an obvious struggle.

In other words, there’s a lot going on under the surface. Although, let me be clear, I’m more like the other branch of my family, the one that never met an emotion unworthy of expression. Immediate expression. Unfortunate, tactless, immediate expression. That’s me. And then there is the rest of the family. Introverts to a one.

So while the obvious answer to my friend E’s question might be, “I do. I bring the drama.” I’d like to argue, before the court, that I am only one part of a system, a system in which there is a designated OBVIOUS drama-bringer, and then there are the subtle dramas that others bring.

Readers,  most of my drama is about resenting that we schlepp through traffic jams and mid-Atlantic highways for 7 or more hours to get to the beach, while the rest of the family drives 2.5 or more with traffic but still not nearly as much as we drive with traffic and their route is much more pleasant with back roads and two lane highways for most of it while we have to take the Thruway and the NJ Turnpike or I95 or whatever clogged miserable artery. It is so UNFAIR.

However, we have been making this journey for most of the children’s lives. And we all love to be at the beach. At one time, we lived a lot closer to the beach - although still not as close as the rest of my original family lives. And because we are all creatures of habit and comfort, we like to go to the beach we know, and eat at the places we know are okay not great because nothing is great at the beach but it’s our beach. Even the husband, who is not a big fan of the beach, likes to go there because that is what we do. That Is What We Do. So you would think that I would have made my peace with that. And really, I had. This year, I was really quite calm about the whole thing. Before we left to pick up the 16-year-old. Before my sciatic nerve was ululating down my ham after hours of sitting in the car. Before all that.

But I was not going to bring drama this year. I was not. Even if that obvious resentment about travel distances is only the tip of the story, I’d been feeling positively zen before we took our three day journey down the eastern seaboard, stopping to pick up the 16 year-old from her summer dance intensive, then stopping in Philadelphia at the Barnes Collection - I highly recommend it. We had to spend two nights on the road because the 16 year-old’s performance was on Friday night, but our beach rental didn’t start until Sunday. That meant two nights sharing a room with the kids in cruddy hotels. My sangfroid began to erode when it took at look at the polyester berber carpeting I had to do my morning sun salutations on at the “Comfort” Inn in Philly. And the pulsing sciatic nerve in my buttock further eroded it.

Okay, I'm lying. It wasn't just the sciatic nerve. Frankly, the very reason that my friend E asked me about the drama was that BEFORE we left on our long journey down the seaboard, I had been talking about feeling some of the old resentment surfacing. I alluded to potential drama once we got to the beach, and this caused her to ask her interesting question. A question I hadn't really faced square on until she asked it.

Well, to answer E’s question, let me just state right out that I arrived at our beach rental in a state. How to describe that state? Well, let’s say I ripped into that vacation home like a rotating drill bit in an electric drill rips into a piece of soft wood.

The rotating drill bit is what we call the 13-year-old when she tries to sleep in our bed. This happens infrequently, and has done so for the last 13 years; but it does happen. And usually by the morning, three of us haven’t slept all that well, and two of us feel like we were sharing a bed with a rotating drill bit, not a child. Right down the center.

So I brought that kind of internal energy to our summer vacation slash trip. By day two, the husband actually said in despair, “I thought you weren’t going to do this this time.” And I saw how my before-trip sangfroid, my equanimity, had been simply tacked on, not really integral.

Fortunately, or inevitably - propelled by the power drill in my brain -  by day two, I injured my foot badly enough that I had to stay off it for the rest of the vacation. At the time, I was walking briskly on the boardwalk and listening to Gil Fronsdal’s Audio Dharma podcasts on doing one thing at time. I was, therefore, doing two things at a time, but I at least I was aware of that. Also, thanks to Audio Dharma, I was reminded of how helpful it can be to simply stop, notice what is happening, and relax about it. This is also known as accepting what is. I soon discovered, by the end of the day, that what was was that my foot hurt like hell and I couldn’t walk on the sand. I had to sit in a deck chair and ice it.

This led to me reading various things on my Twitter feed - and got me to the idea of intention setting for the day . Or got back around to it again, because I’ve heard it before. This is one of the secrets of successful people. They set intentions.

The next morning, when I woke up, I set an intention. My intention was to be open-hearted and observe. This is a strategy often recommended by therapists who are sending their clients (patients?) off on family, uh, trips. Instead of reacting like a rotating drill bit, just observe. Observe what others are doing.

And one thing I observed right away was that I was bristly. I had the energy. I was the rotating drill bit of our week-long vacation bed, internally. We were all in it together, and if I didn’t stop rotating crazily, then no one was going to get any relaxation.

So I just stopped. I tried to just can it. I practiced my yoga and my 5 Tibetans on the pool deck overlooking the lake, and played in the pool with my kids and my niece and nephew. I relaxed into the house, which was actually quite fine in a very outdated way. “Key West meets Rehoboth” was how my beloved Cousin Ell and Aunt and Uncle Wisdom described it. Yes, they were also at the beach, staying at my beloved Cousin Ell’s new and fabulous beach house, but I insisted they had to see our rental because it really was something. There was the amazing green rattan furniture with plastic covered cushions. There was the teal and pink color scheme. The huge kitchen had two fridges, three sinks, two dishwashers, and an enormous cooktop. The place was set up for entertaining. It had a gorgeous deck, yard, and pool, all full of wonderful plantings and landscaping. There was a caretaker who came by every day and told us a little about the owner - relative of the DuPonts, former owner of a baseball team. It was olde school relaxed luxury. And I observed how very, very easily I accepted the lifestyle of the cared-for by a caretaker. 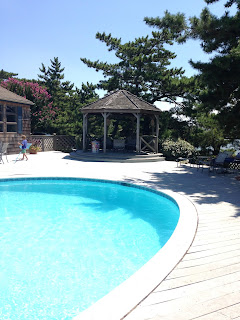 So, did I answer E’s question? Who brings the drama? Sadly, it might be me. At least I bring sufficient internal drama that it doesn’t even matter what drama anyone else might bring. All I can feel is my own. But when I turned it off - I unplugged the drill - things were a lot simpler. It’s true that the only person you can change is yourself. The only drama I can affect is my own.

I guess it’s fitting that E sent this quote to me, now that I’m returned from the trip. It’s one of those refrigerator magnet type quotations; but it’s a good one. A really good one.

To laugh often and much; to win the respect of intelligent people and the affection of children; to earn the appreciation of honest critics and endure the betrayal of false friends; to appreciate beauty; to find beauty in others; to leave the world a bit better whether by a healthy child, a garden patch, or a redeemed social connection; to know that one life has breathed easier because you lived here. This is to have succeeded.

*Here’s the link, in case you’re bored with me already, Readers: http://www.huffingtonpost.com/m-blazoned/vacation-or-trip-a-helpful-guide-for-parents_b_7789310.html
Posted by Hope Perlman at 5:53 PM