A Few More Tips Regarding Success

Once again I've produced one of those catch-all posts that really have nothing to do with success, but are illustrative of what is distracting me from actual, measurable, success. I probably shouldn't say that, especially not in the first sentence. I probably should let you read on a bit, trying to figure out what the hell plastic surgery, mono, and potting sheds have to do with success.

Answer? Well, if you're creative, then you can probably find some kind of connection. After all, aren't we all interconnected and breathing molecules of Einstein and all that jazz? Yes, yes, we are.

So. Now that I've gotten that out, here are a few thoughts on the week, or success, or whatever.

I finally understand about potting sheds. Given: They are quaint, and desirable in an Anglophiliac way. Well, apparently, they are also pertinent and useful. To plants, for sure, and also to me. Apparently, plants need to be repotted regularly. I did not know this because until recently, I hadn't successfully raised plants. Probably because I did not ever repot them. Then I acquired an excellent kitchen windowsill, and subsequently, several plants. And now I understand. I went to the adorable plant store in Troy to find a nice pot for my wandering jew, and the pots were so expensive that I paused to wonder to the nice guy behind the counter if there was a way to keep a plant from outgrowing its expensive pot. The nice guy told me that there was no way to stop a plant from growing - except a bonsai - so you have to repot them. The alternative is letting them starve in their nutrient-poor old soil and eventually keel over. And now I wish I had a potting shed, because I can see how one acquires a collection of pots and needs a place to store them and the soil and the spades and whatnot, someplace more picturesque and intentional than the edge of the patio next to a shrubbery. I left the store with no pot, by the way. I wondered, not for the first time, how such darling stores as this botanical store stay in business. Maybe it's because plants keep growing and you can always snip off a little bit and root it and sell it in a cute, teeny-tiny pot that is so irresistible that a guilt-ridden plant momma like me will start down a path from windowsill to potting shed and keep you going.

Clarification: I have no shed, no potting shed, and no plans for a potting shed. Just dreams.... 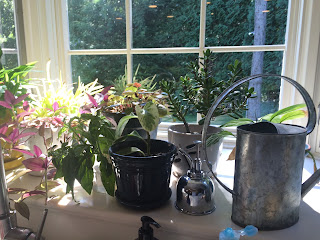 In other news, here's a tip. Don't - I mean do not - ask a plastic surgeon what he thinks of your face. I really shouldn't have to tell you this. You really ought to know better. However, I did, but I did anyway, and now I pay the consequences. Because I cant' pay for the  treatments he suggested. So I'm performing a public service here by reminding you of what you already know, because I already knew it, but did it anyway, and saving you money. And face. Saving you face, too.

Just remind yourself that people like you, and some even love you and find you attractive, even with your sunken, aging eyes.

If you want to run a successful feminist Instagram account, you must make sure to find an administrator for it when you go away for three plus weeks to attend camp. That is what the 13-year-old did. First she started this account (@a.b.c.d.e.f.eminist) and it developed a lot of followers. Then she found an administrator. Curious as to how she managed this, and why she even knew how to do it -or knew TO do it, we asked. Most of our questions are unanswerable; rather, they are answerable by understanding that the youth internalize the social media rules by osmosis. But she could tell us how she found her administrator. She announced to her followers that she had to take a break and asked for people interested in being "the admin" to DM (that's direct-message) her their name, age, and why they want to be the admin.

The husband and I looked at each other. This is a child who doesn't put a new roll of toilet paper on the holder unless instructed.

So how old was your admin, we asked?
20, she said.
I cast a glance at the husband that said, "Who is this strangely self-assured child and can we take any credit for her. He cast a glance back at me that said, "My, my, my."
Do your followers know you are 13? we asked.
No, I keep that to myself, she said, and added, Being 13 and a feminist on the Internet you're not going to get that much respect.

Finally, because my self-esteem is reasonable these days, and I feel more like a successful person than a failure, I have withstood the following recent blows with only minor catastrophizing:


Come to think of it, I don't think "catastrophizing" and "minor" belong in the same sentence. It is more accurate to say that I only briefly indulged in anxious catastrophizing. Then I righted myself. That is a sign of mental health. These things have all happened in the passage of a week - in the passage of three days for the majority of them. The week before our summer vacation, I might add. Which means I will spend the vacation observing the 16-year-old for symptoms of mono and waiting for the kennel to call to tell me the dog is sick. Ah, life.

On the plus side, I was shocked in a good way to learn that a friend of mine has pierced a part of her anatomy that I would never have expected ANYone to pierce. Any woman. A man couldn't. Ah, life. So what if the eyes are sunken and aging? We are lucky to grow old. I will remember that.

I leave you with that, Readers. I hope to entertain, if not edify.