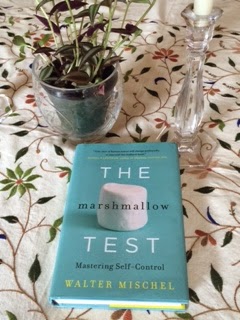 So, with thoughts of riots in Baltimore and conflicting reports of how they started and who was doing what violent and out of control thing, let me return to good old white guy Walter Mischel and his book The Marshmallow Test.

The test, as I have mentioned before, became misconstrued in the popular news as a definitive test. That is, people assumed that if a four-year-old could delay gratification long enough to win two marshmallows instead of one, that determined something fundamental about their self-control. The assumption was that self-control was of a fixed nature, probably genetically determined. Reams of anxiety built up around this question of delaying long enough to get into Harvard versus turning out to be a total wastrel – or perhaps, “thug,” a word that is getting much attention these days.

But it was not so. Mischel devoted his life to studying this marshmallow effect in various permutations, and he realized early on that self-control is something that can develop. It is not fixed. (Shades of good old Carol Dweck, one of his colleagues) And therefore, it can be taught. Self-control depends on executive function, and executive function can be developed. In short, Mischel learned that it is never too late to build up self-control.

So. While some four year olds might have an advantage with a marshmallow, that advantage might be more about being raised in an environment that is safe, consistent, and leads the child to trust the adult who says, this thing looks pretty good, but if you wait a while, you can have something even better. Children raised in middle class or higher homes, for the most part. Children raised in much more stressful and unsteady environments have a much harder time, not because there is something intrinsically less developed about their brains, but because their brains are overtrained to react quickly. Why is this?

Psychologists talk about the brain having two systems. System 1 is impulsive (hot) and System 2 is more rational (cool). System 1 is related to that good old lizard brain, the part of the brain keyed to survival. The fight or flight system of arousal is part of System 1. System 1 is very attuned to stress, and stress, what Mischel calls “toxic stress”, is rampant amongst, for example, poor black children from violent neighborhoods….Remind you of anything in the news lately? These kids might just have a bit more trouble understanding that the adult who promises two marshmallows later is actually going to deliver. For these kids, it makes much more sense to just go for that one marshmallow that exists right now.

The fundamental principal of self-control is “cool the now, heat the later.” So cool the now, heat the later means to cool down System 1 long enough that System 2 can activate. This is difficult, because the hot system is all about now. Gimme now. Me want cookie. We tend to discount rewards that are delayed, even if we know, rationally, that they are good for us. Like going to the gym. We know without doubt that the future rewards of going to the gym are great – better health. But overcoming the immediate reward of relaxing, or not putting all the sweat and effort into your day, make the future reward seem much smaller than it actually is. Self-control is about reversing our natural tendency to make the later reward seem more appealing. It’s about using our Executive Function to help us make choices, rather than acting on impulse.

So how do you cool the now and heat the later? You have to exercise that Prefrontal Cortex and develop Executive Function. In general, relieving stress helps. So, you know, providing for the basic needs of every human would go a long way toward setting up people for success. For those already provided basic needs, reducing stress through exercise, solid supportive relationships, and – wait for it, even 84-year-old white guy Walter Mischel advocates this – meditation and mindfulness. Also therapy helps.

There are also specific strategies that build self-control.

If all these strategies seem draconian, and you’d just like to eat a damn marshmallow, I leave you with this:

…. A life lived with too much delay of gratification can be as sad as one without enough of it. The biggest challenge for all of us – not just for the child – may be to figure out when to wait for more marshmallows and when to ring the bell and enjoy them. But unless we learn to develop the ability to wait, we don’t have that choice.
- Walter Mischel, The Marshmallow Test.