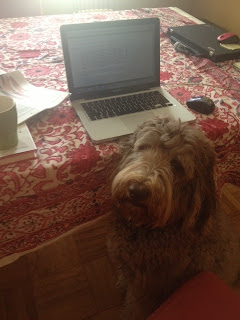 I was all set to write about Lean In by Sheryl Sandberg, but then, OMG, Readers, did you read the New York Times Sunday? The Sunday Review? The Gigantic Lettered article, “Sundown in America” by David Stockman, to be specific? Because I did. And I haven’t emerged from underneath my dining room table yet. I haven’t yet emerged from underneath the slab of plywood perched atop the IKEA table that is my dining room table, to be specific. A slab of plywood, by the way, is perfect seating for twelve. Even fourteen, if your chairs are skinny. So most of the time, it is my desk cum repository of things that need to be returned to mail order catalogs cum missing scissors and books I am reviewing and so on. At Christmastime, though - and I mean Yuletide as only a secular Jew can mean it - the plywood lives up to its full potential. Sometimes at New Year’s Eve, too. But that’s on top of the table. Plywood. And this is April. And I am underneath. Because. Jaysus. Basically, according to President Reagan’s former budget director, the stock market is going to pop, the economy is going to drop, and we really are going to be in Mad Max land, before I even get to trade in my plywood and IKEA contraption for a grown up dining room table.

Did you see that movie “Contagion” about society collapsing in the face of a pandemic caused by Gwyneth Paltrow shaking hands with a famous chef somewhere in China? I did. I probably shouldn’t have, considering that I attempt to live my life without pharmaceutical aids. David Stockman’s article reminded me of that.

I am waiting for Paul Krugman to make me feel better. So you can see where this is going. The dog and I are going to cozy up under here. He doesn’t mind sharing his bed. Because Paul Krugman, while I love him, doesn’t offer much hope. He’s always saying, “Here’s what’s wrong with what Congress is doing, but it’ll be okay if Congress just changes things a wee bit.” Only then Congress doesn’t change, but still there’s the tantalizing possibility of change. However, compared to the obliterating vision of that article in the Sunday Review, Krugman’s just a tiny keylight of reason. Barely visible.

The husband, meanwhile, read the first two paragraphs of David Stockman’s piece and said, “He’s a conservative. I don’t need to bother.” Which is probably a healthier attitude than mine. Less open-minded, let’s be honest, but less likely to cause unrest.

That “Sundown in America” piece isn’t the only thing that’s been bothering me. Last week, returning from my allergy shot, I listened to some éminence grise from Yale about global warming, and when I got out of my gas guzzling vehicle, I couldn’t help but wonder what the point would be of continuing to examine success, when the planet is going to fail. This professor from ole Elay told the nice public radio host that only 16 percent of Americans are concerned and ready and willing to help avert climate disaster. 25 percent of us are concerned, but think the problem is sometime in the future no rush no bother we’ll figure it out eventually. Meanwhile, according to the professor, all reputable scientists agree that global warming is happening, and that while in the past, warming periods have happened spontaneously, this one is a result of human behavior. So why do we waste time arguing about the science, when the science has been proven?

Well, because 8 percent of us are climate change deniers. A very loud 8 percent. A politically active 8 percent, many of whom have ties to the petroleum industry. A small, vocal minority hijaking politics while the majority of us write blogs. Sounds distressingly like every other issue important to me. Guns. Reproductive rights. Equal pay. Marriage equality.

Splurggggghhhhhh. (Noise of despair discouragement face planted in dog’s bed.)
Then I thought, well, okay. I will say my piece. I want to try to make the planet healthy. I want to make the economy better. I am even entertaining strange thoughts about getting politically involved. Which  would really be a disaster, since I am decidedly lacking in politesse, or tact, or strategic thinking skills.

And then I thought, well, okay. I’m in the 16 percent, and I will do what I can. But also, in the meantime, I should continue my inquiries into success, which is really an examination of how I think it best to live. After all, what are we going to do? Totally give up? Meals still need to be made. The children still need teaching. They are our only hope. This is not so much fiddling while Rome burns as it is being part of the band playing while the Titanic sinks. A little bit futile, a little bit foolish, a little bit noble. Making art of life, knowing it’s going to end, but still hoping to see that rescue ship pulling up alongside at the last moment.

So if I’ve been silent on the blog for a while, that’s why, in part. Also, I’ve been reading Sheryl Sandberg’s book. And I will comment on that next. Promise.
Posted by Hope Perlman at 1:42 PM

Email ThisBlogThis!Share to TwitterShare to FacebookShare to Pinterest
Labels: anxiety, community, How to Live, principles and values oh my, worry