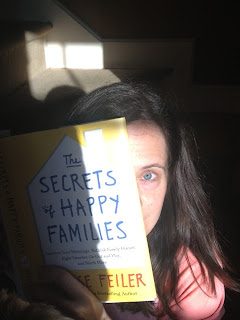 Okay, there’s a book I’ve been avoiding: The Secrets of Happy Families, by Bruce Feiler. It’s bright and yellow and friendly looking, and it’s been sitting on my shelf for a few months, but I’ve avoided it. You have to admit – or at least, I have to admit – the title is a little threatening. Sure, it’s catchy, and there’s that reference to Anna Karenina implied in it, but the thing is, my family is on the old side. The 9th grader is, well, in 9th grade, and the 5th grader is also no longer a small child. As for the partnership slash marriage slash union between the husband and me, that’s also in its teens. It’s not like we’re newlyweds, or just starting the kid process. What if everything we’ve been doing so far is, you know, wrong?

Even scarier is the question that follows a book with that title, like night follows day and yin follows yang: What if I learn those secrets of happy families, and discover that our family doesn’t know them? What if my family isn’t happy?

I mean, is it? I mean, I think, objectively speaking, we’re a happy family. Or happy-ish. Within the bounds of love, we like one another. We laugh – and not only at one another. There’s some yelling and some pouting and some crying. That’s normal.

I’ll admit, I read a column Feiler wrote a couple of weeks ago that gave a little glimpse into the book. The column was about fighting well. Or, perhaps I should say, about resolving conflicts. There was a nifty bit about how if you need to have a difficult conversation with someone you should make sure everyone is sitting at the same level. Don’t have someone on a footstool and someone on a counter stool. The butts should be on the same level. Level playing field, so to speak.

There was another nifty bit about making sure, when discussing topics of potential conflict, such as curfew violations or other infractions, that you sit side by side with your child, because that position encourages collaboration and minimizes the confrontational aspect of your, uh, confrontation. Here, butts should rest on cushions, because flexibility under the butt contributes to flexibility in the head.

What’s so threatening about that stuff, you wonder? Well, I’ll tell you.
Readers, there is always a chance that everything I have ever done as a mother, adult, person, embryo, and zygote has been a mistake. So I read that piece, and I thought, geez, we haven’t had many fights and arguments with the children. We’re not a big fighting arguing punishing family.

Maybe the children are just not old enough for that kind of problem and it’s comin’ down the pike. If so, I have now made note of all cushioned seating in the house and will be sure to use it. Maybe, though, something in our parenting style has squelched the children. I have enough amateur psychological knowledge to know that feelings is feelings and they don’t just vanish. Perhaps our style, the husband’s and mine, the rule-with-the-invisible-fear-of-invoking-our -displeasure style, which has so far SEEMED to serve us well, has created a system of stealth rebellion in the children. Maybe we have forced them to stuff their negative emotions. Maybe they are slowly simmering cauldrons of resentment, the kind that never boil over. Maybe this style will in turn drive them away from us and send them to the far pillars of the world, from which they will only return periodically, armed with spouses or partners, and never for more than three nights.

So I had a little fear about reading the book. Plus, a quick glance at other books Feiler has published revealed they skew religious. At least their titles do. Walking the Bible, Abraham, and Where God Was Born, for example. Which. Well, I’m wary of yet another book (or person) telling me I need to have some particular religious faith to flourish.  Also, a quick check of my search engine revealed that he’s already had four nonfiction bestsellers, has done a TED talk, has suffered from cancer, and is seven months younger than me, to the day. To top it all off, he has worked as a clown.

Despite these fears, aversions, skepticisms, and – let’s call ‘em what they are – jealousies, however, I cracked the book last night.

Not being at all competitive in any way - not that there’s anything wrong with being competitive, I have plenty of friends and relations who are competitive, it’s just that I am way above petty competitiveness - I wasn’t at all pleased to discover that the concept Bruce introduces in his first chapter, Agile development, is one I’ve learned already from my editing work on technology articles for a web content management company.

I’m calling him Bruce, now, because his book’s cover is after all so friendly yellow, and because it makes me feel more equal to him. Not that being equal matters. (See above, re: competitiveness.) Also, I was being ironic in that last paragraph, in case you weren’t reading with full attention to detail.

Anyhoo, yes, me and technology go way back. Back to high school, in fact; back to the Daisy wheel computer we had, with the password I just might have leaked to someone (a boy) at another school, thus causing an early hacking scandal.  I was never blamed for this, because apparently, someone else had also leaked the password to someone (a boy) at another school. She got caught, and I didn’t. So, my feelings of competence with technology were encouraged.

It occurs to me that this example is really something totally different than competence with technology. More like competence at lying low, a skill I honed, and which came in useful later in an episode involving several people (a boy) and Great Falls, Virginia, and some illegal substances. Which I actually hadn’t used, but I was there, it is true.

But I digress. I was trying to get to the story of how yesterday the 9th grader asked me how I would explain what a computer was to someone who had never heard of one. I asked her, “How would you explain it?” but she was having none of that kind of parent-answer that really turns the onus back on the questioner. So off I went on a ramble about code and ones and zeros, and was filled with fond remembrances of how I used to hang around with lots of MIT grads and how they could explain it to the 9th grader much better than I. But we got through it, somehow.

Anyway, Agile is a methodology, adopted from software developers, as an alternative to a traditional management approach to project development. Agile is based on a team model with lots of feedback and revisions at each step of the development process. It’s catching on in all kinds of enterprises, and it’s been quietly making a mark on family life. Says Bruce, “The core idea of agile development is that life is constantly changing, and we have to organize ourselves in ways to allow us to react to changes in real time. The centerpiece of the program is a weekly review session built on the principle of ‘inspect and adapt.’”  Thus, Bruce discusses establishing a weekly family meeting with a regular agenda of answering the following three questions: 1. What went well in the family that week 2. What things could be improved in the family? And 3., What will the family commit to in the next week?  The main benefit of the family meeting is that it provides a consistent slot for communication.

There are lots of other details, but this post is getting too long. And there’s a friendly yellow-covered book to read if you want to know more. It’s only one of Bruce’s many ideas, and it’s pretty interesting.  Not at all scary. I’m going to read on.
Posted by Hope Perlman at 6:05 PM

Email ThisBlogThis!Share to TwitterShare to FacebookShare to Pinterest
Labels: agile, Bruce Feiler, How to Live, parenting, parents, The Secrets of Happy Families