Annals of Gardening: An Inventory 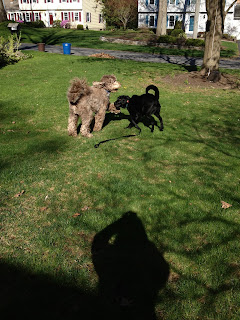 It’s taken nearly four years, but I am pretty sure we’ve finally killed the pachysandra. Yes, I know. You readers who are gardeners are amazed. Killed pachysandra? I thought that was impossible, you are thinking. If I’ve learned one thing in all my research on success, however, it’s that almost nothing is impossible.

To be honest, I didn’t kill it. At least not directly. In fact, I’ve regularly shaken little granules of fertilizer on it from a container left behind by the previous owners of our small cottage. They left behind the fertilizer, but managed to “lose” – that is, to toss out in a fit of pique or thoughtlessness, probably the former – every manual for every appliance in the house. But what does it matter? Every appliance has broken since then, so whatevs. I digress.

If not me and the husband, then who? The dog, of course. The dog killed it. He and his best friend, who lives across the street, have mowed it down, wrestled in it, lounged in it, peed and pooped in it (sorry – TMI?) while their owners stood idly by, chatting and waving off the school bus. The stuff has given up. 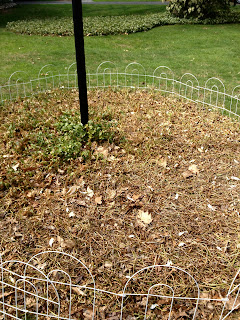 And yes, it has been almost four years since we moved into this house. It’s been nearly four years since my venerable father visited and left me with these words, “You’ve taken on a mature garden with this house, and it’s going to require a lot of work – staff – to keep it up.” More or less. I didn’t record him, and I am pretty sure my entire head filled with a mental drumbeat – “staff/can’t afford, staff/can’t afford, staff/can’t afford” – thereby blocking out the few remaining mental capacities I retained after moving from the city to the suburbs. So his exact words are lost. The rest of my brain, aside from the drumbeat, was screaming, “Fool, you were a fool, why didn’t you buy a house with a tiny yard? But he said pretty much that, because the words seared my innermost accesses, and there they remained, waiting until now to prove true. The way a father's words can.

Now, when I say the pachysandra, I don’t mean all of it. Just the patch of it dead center in the middle of the front yard. Just the most obvious patch of it. There’s plenty on the side and in the backyard, still.

But there’s more devastation. I may have been overzealous in pruning the variegated dogwoods by the front door. The dog had nothing to do with that. 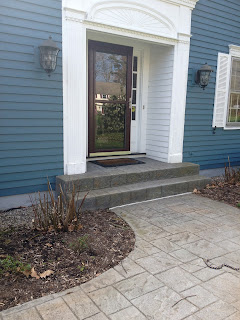 Although, again, I am being perhaps disingenuous if I don’t mention that an actual, official, and not incidentally, very handsome tree specialist told me that they usually only last about eight years, which is probably how long they’ve been there, so I might as well give ‘em a last ditch effort to come back bushy and handsome. So I did it in good faith. There are a few buds. Same with the over-leggy hedge along the garage. A major hack job in a last ditch effort to revive it. 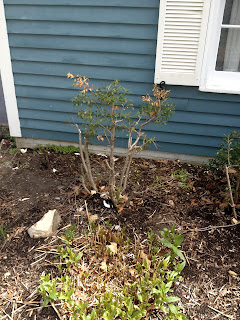 Not so the roses. There, following only advice I gleaned off the backs of cereal boxes, we seem to have under pruned some and outright murdered other bushes. Not a whit of green on those stems. 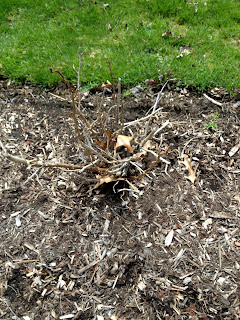 On the bright side, all the evergreens are still thriving. The rhododendrons are doing just fine. (Those are jokes. They require no effort, people.) The crabgrass, dandelions, and moss are also doing very well. And the ferns. (Ditto, and ditto.) Live and let live, I say.

Furthermore, as we say up here in the Northeast, it's early days yet. The dogwoods may well do me proud. Spring has only just begun.

So what does this have to do with success? Well, Readers, this may be a stretch, but how ‘bout this? I still hold my head up when I walk the dog around the neighborhood, and the neighbors still say hello. I’m not an ulcerated mass of suburban guilt because my yard isn’t perfect. Nor am I trying to keep up with the next door neighbor, whose grass is definitely greener. I am putting my mark on the yard. Now, those marks may be lethal, but they are mine. I do have plans. If the roses and the dogwood and the garage hedge don’t come back this year, we will tear them out and replace them with something else. Probably pachysandra. (Kidding.) And that dead patch of pachysandra front and center? We may turn it into grass. The yard may have weakened since we moved in, but I am feeling more rooted. That’s one kind of success.