My left eyelid has been twitching intermittently for two days.  Is it the lice?  Is it the husband being on call again?

Following up on my last post, I was going to talk about self esteem, only oh my God is that subject so boring and 1980s and eye-roll provoking. Also, I wanted to ask my sister the psychoanalyst to define it for me. I could just look it up, Google it, even go to the library, but I want to talk to my sister about it  because she's an excellent psychoanalyst and will explain it to me in terms a layperson can understand.

Which isn't me, because I consider myself an honorary psychoanalyst, considering how many books I've read, and how many hours I've spent in therapy.

Okay, never in actual psychoanalysis, but only because I refused to lie down on the couch, and refused for so long that my shrink agreed it was probably better for me to have eye contact with her.

The real reason I want to talk to my sister about this is because I will feel so aware of my deficiencies afterwards. She's smart, and she has a career that pays her money.

And then she can tell me more about my two-and-a-half year old nephew and how he still insists on wearing this one shirt and one pair of shorts every single time he leaves the house, even though it's 2012, winter, January, and this has been going on since at least last April when I visited.

And it's not so then I can try to raise my self esteem by feeling smug because my little children didn't do that craziness when they were my nephew's age. After all, they had their own little crazy happening. The 8th grader, when she was two-and-a-half, responded to every well-intentioned stranger who asked her name that she was "Dudley" (the pig from Richard Scarry), held up her hands and added, "and these are my trotters."  Which scared more than one grocery checkout clerk. The 4th grader, when she was four, wanted me to draw a cat nose and whiskers on her face every morning for months and months. 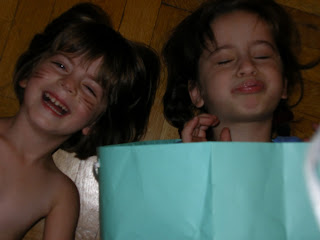 I'm that kind of mom.

And so is my sister.

Which is why after she defines self-esteem for me and we recognize the roots of why I have none and I berate myself for becoming a writer instead of something more defined and lucrative like a psychoanalyst, I will feel relieved that my children are now much more reasonable critters than her little boy.

And then I will remember the lice.

So I hope she calls me back soon.


* And I've really been thinking about Stephen Covey's Habit #2, Start with the End in Mind, and have been pondering my Mission Statement. And eventually I will get there, so hang in with me, my tens of readers. It's just that my head has been so itchy.

Bonus: can you identify the store that shopping bag came from?
Posted by Hope Perlman at 12:57 PM