Did you think I'd forgotten about Stephen Covey and his Habit #2, Begin With the End in Mind?  Did you think I was skirting the mission statement exercise? Avoiding it? Hoping it would blow over?

Okay, I admit it. I was having a problem with the Mission Statement. It really felt too enormous to tackle, especially during the holiday season, in any logical way.

Sometimes, though, my tens of readers, logic isn't the best way to get at a solution.

(Previous paragraph to be read with a Southern accent.)


That is the way I roll. I'm a believer in letting intuition work on problems. When I write fiction, I often ponder my characters, plot, or themes right before I go to sleep. I may not wake up with a solution ready to write down, but usually something comes up that leads me onward in the story.


Over the last several weeks, while I narrowed my expectations to smaller goals, and tackled a few issues, I had the mission statement in the back of my mind. I was simply letting my brain work on the problem behind the scenes.

Part of what preoccupied me was New Year's Eve. How high school, right? But it weighed on me. I wanted to have people over, but was nervous about inviting them. I wanted to be invited somewhere, but no invitations were forthcoming. We've lived in this town for 2.5 years, and everyone has their circles of friends. We have two couples we're friends with, and one of them was away. (Sound of tiny violin, please...)

And then, it all happened. Someone invited us over for New Year's Day. This gave me courage to invite a new friend and her family to our house New Year's Eve, along with our old friends who were in town.  And they came. And the 8th grader had two friends sleep over.

And we had fun at our house, and we had fun at the other people's house, and I felt like part of a community, and the word "hospitality" popped into my head, and I thought, yeah, hospitality is something I value. Extending it, and receiving it. Value it highly. Value. Mission statement.

So I had a little hook.

Hospitality links to something else: generosity. Whoever said it first was right, that unless you've experienced being unable to be generous to someone, you don't realize how important it is. Which I definitely felt, our first year here, when I felt like we were hanging by our fingertips over a precipice, our budget was so tight. And if you can't feel generous, you can't feel like part of a community, except as a poor relation. 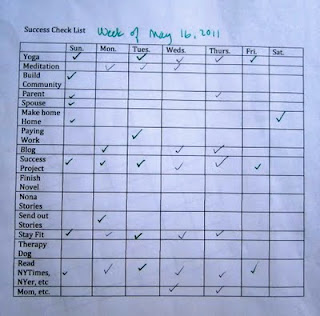 Being part of a community reminded me that thanks to my phase channeling a Type A version of myself,  I had this nice chart of all the activities I was trying to do. It really needn't be so difficult to come up with values and principles. After all, the things we spend our time doing are the things we value, whether we like it or not.

So here's my chart, which mentions community right near the top. It shows me that along with community, I value my children, my marriage, fitness of mind and body, and writing/ work.

Add hospitality and generosity to that, and I think it'll do. I can move on to Habit #3.

So what's your list?
Posted by Hope Perlman at 9:52 AM