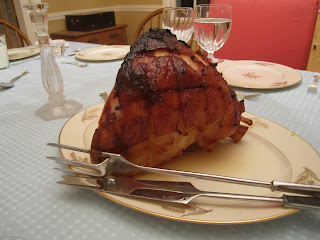 The ham was delicious. And huge. It weighed several pounds more than I was led to believe it would when I ordered it, and for a germaphobe vegetarian-at-heart like myself who has a touch-and-go relationship with meat, it presented a challenge. I did purchase it from a regionally famous butcher pre-cooked, cured, smoked, and shot through with some preservative that kept it looking pink. I probably could have gnawed on it in the back of the car.

Nevertheless, I was nervous about cooking it through. Or heating it through, to be precise. We were feeding a lot of people, including children, who were sleeping over. I didn't want any vomiting. So while everyone seemed to enjoy it, I really only fully appreciated it the morning after Christmas, when I woke up, and said my first words to the husband: "That ham was delicious, because nobody got sick." Happy Boxing Day.

***
Back to Effective slash Successful People's habits.
Still splashing around in Stephen Covey's Habit #2, Start with the End in Mind, I've avoided describing my funeral only to run smack into the instruction to write a mission statement for my life, so that I can direct myself towards those things that are in accord with my deepest principles.

Oy vey. Is that overwhelming or what? I decided to put off the task again.

So I took the dog for a walk, and decided to listen to a Zencast, which I hadn't done in a long time, on my brand new iPhone4S. Zencast was a talk by Jack Kornfield. Jack Kornfield was one of the first Americans to popularize Buddhism in the West starting in the 1970s. He's got a nasal voice, but he tells good stories. I like his talks, although he does repeat himself. Then again, so do I. Lo and behold, Jack started out talking about success. What it isn't: avoiding difficulties and suffering in life. As if experiencing these things is somehow shameful. Which is actually true. We do feel ashamed of our misfortunes, don't we?

And of course, he talked about meditation as a way to understand the nature of the suffering and misfortunes of life, as well as our reactions to them (avoidance), which often increase our suffering. But what he was really talking about was the purpose of meditation. First, to quiet the mind. To allow yourself to understand what's going on, in your own head, and in the world around you. To observe and understand that suffering and bad stuff happens as part of life, and so does plenty of good stuff.

Second, after understanding by observing your own mind, moving out into the world. That is, forming intentions. Am I in a funhouse or what? All these gurus keep telling me the same things. Anyway, he was speaking of intentions both micro and macro. Micro being taking a slight pause and observing your anger at your 4th grader for losing her purse with her cute panda wallet and fifty dollars, and also observing her quivering chin, before deciding how to respond. Macro being, you guessed it, understanding what's most important to you in life, your core values, your principles, so you can act in accordance to them.

And as he went along he mentioned that if you're meditating, you are on the path to enlightenment. Even if, I suppose, you're only doing it to lower your blood pressure and keep your stress at bay, you're at least on the path. And somewhere along the path, some people take the Boddhisatva vow, which is to strive for enlightenment for the purpose of helping other sentient beings become enlightened. 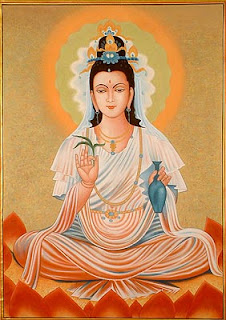 Which brings Jack, and me, and you, my tens of readers, right back into the stream of finding the purpose and motivating principles of our lives.  "Wherever you go, there you are," as Buckaroo Bonzai said.

Why does it seem so hard? That I listen to Zencast and read these books and take an interest in these questions of purpose and principles shows me something. A couple of things. One, I know I'm not so unique in these interests. There are lots of people like me who want to consider these deeper questions, at least on some level; but we're just as happy talking to Siri on our new iPhone4s or rushing to the outlets on December 26th with the MIL and the SIL for some major bargains.

Another thing I begin to see is that my reluctance isn't about some hangup in myself about facing my deeper values. It's about a sense I have that this is a shameful or embarrassing activity. That there's something silly or New Age or creepy clammy-handed about being interested in a greater purpose.  And if I think that, lots of other people do, too. So while we all might have this hankering for a deeper understanding, we also have this reluctance to say it out loud.

Why is it more embarrassing to say I'd like to cultivate my understanding, compassion, and wisdom so I can make choices that improve the world, starting with my nearest and dearest relations, through my good intentions, than to say that my iPhone4s makes me happy?  Which it certainly does.

Maybe you can answer that question, my tens of readers.
Posted by Hope Perlman at 4:57 PM