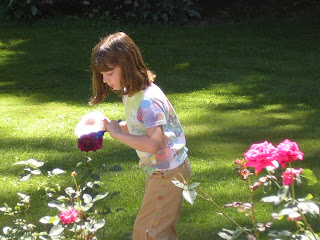 What I'm thinking about is gardens. This morning the 2nd grader took her Tuppertainer of soapy water around front to search for Japanese beetles. Each one she scoops into the container nets her a quarter - terms set by my MIL last summer when swarms of them overran the roses, and my MIL, much cleverer than I at setting children to work, recalled that her parents paid her 5 cents per beetle back in the 1940s. Anyway, 2nd grader went around front and I forgot about her in a frenzy of sweeping cobwebs away from the doors and trying to sweep off the deck. Wouldn't you know the grooves of the deck planks run the wrong way, so you can't just sweep stuff over the side onto the patio, you have to actually use a dustpan? Well, I don't have a dustpan. And my broom has a tendency to pirouette around its base, sometimes unscrewing itself all the way from the stick. So you can see I was busy.

After an unknown number of minutes, I'm guessing maybe ten, my daughter was back, standing in front of me, with her arms at her sides, in that way some kids have of quietly presenting themselves as upset and waiting for you to notice. At least this one does. Her sister wouldn't be so quiet. And I did notice. When I asked what was wrong, she told me, chin quivering, that a wasp had landed on her eye. I looked and there was a tiny pinprick drop of blood just in the corner of her eye, over her tear duct. "Did it sting you?" Head shook no. "Are you sure?" Head shook no. I wiped away the blood with no comment and gave called-for hugs.

"It was there for a really long time. Like ten minutes," she said, now sobbing, and now I was tuned in, because I understood the whole of what happened. While I was tussling with the pirouetting broom, she was frozen in fear with a wasp on her eyelid, too afraid to move or scream, absolutely trapped. I felt guilty - of course - as if I should have known somehow that my child was in trouble; and sad, thinking of all the traumas we have to suffer alone, even when surrounded by loved ones. Some things you just have to get through yourself, and you do, but doing it alone makes the world seem a little bigger and more impersonal.

"It was on my head for awhile first," she continued, pointing to her crown. "It started here and traveled slowly down." I suggested she could have brushed it away at that point, hoping to help her avoid future incidents. "It was prickly."

I thought it was time to wrap up the subject, as visions of phobias developing crept into my brain. I told her the wasp was checking her out to see if she was a flower, and that luckily it was smart enough to figure out she wasn't. Then the weed-whacker that C bought last night broke, and I sent her off with him to the store to return it - and to get a better broom and a dustpan for outside.
Posted by Hope Perlman at 2:45 PM