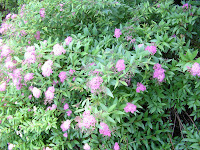 I was derailed by the wasp incident reported in my previous post from my original garden topic. Friday evening I was weeding my enormous garden, full of resentment that I was weeding my enormous garden, and thinking unhelpful thoughts. Let me just try to make myself look a tiny bit better by saying that I had spent the day looking up jobs, sending out resumes, and bagging groceries at the Coop, not writing, and therefore feeling put-upon. As I was saying, I was thinking unhelpful things like, "I never said I liked to garden. What I said was that I like gardens." I spent many a lovely evening strolling in the Central Park Conservatory Garden at 105th and Fifth Ave., which was across the street from our apartment, and came to feel almost like a back yard - a back yard in which I could sit on a bench and watch my children dangle sticks and leaves into a lovely fountain and read little signs identifying all the flowers and herbs I did nothing to promote. I highly recommend visiting that garden. It's always beautiful, in every season.

I did enjoy gardening in our little backyard in Somerville, MA. The yard was all paved over by my landlords, retired Marine Jerry and his invisible wife Joanne. We lived in the downstairs apartment their daughter used to occupy. There was a dishwasher in the kitchen and a dryer outside on the enclosed porch. There was also a shag carpet in mottled pink. The backyard was cement, except for a nice 5' X 8'  plot up against the house. Shades of Barenaked Ladies' "The Old Apartment" ("Why did you pave the yard? Why did you plaster over the hole I punched in the wall?") Without even checking for lead in the dirt (pre-kids), I planted six tomato plants and they flourished in a most astonishing manner. Someone told me marigolds protected tomato plants from something-or-other, so I planted a line of those around the perimeter. There were no weeds to speak of. Boom. Bazillions of tomatoes. And I wrote a poem about them, which was later published in Salvage magazine. I don't think Salvage exists anymore, but here's the poem:

My six tomato plants
stand over five feet tall.
They were one tenth that size
when I wheeled them to my car.

At the nursery they said
just plant them and let them grow.
I piled on compost and set
each inside a white wire fence of its own.

Now they've overgrown their cones.
Branches poke through the wires,
loll and droop with fruit,
slatterns careless of their loads.

That plot's an obstetrician's waiting room,
full of wildly fertile ladies
clumped and waiting to birth
dozens of green babies,

A nursery of hatchlings,
jostling like children clambering at fences,
hair wild and unbrushed,
feet stuck in the crumbly earth.

Next door, two refined tomatoes
grow up sedately staked,
pruned and decorous;
mine are riotous green,

spangled with copious yellow florets,
melodramatic and garish like bad poetry,
saying, "Look at us, look at us,"
immodestly.

Anyway, that was a manageable garden, mostly cement. The next garden was at the little house we rented for four years in Albany. I tilled, turned, weeded, dug out, and planted a perennial bed along one side of the driveway. After a year, I became pregnant with my second child, and it was hard to bend and weed. And then some sort of wasp that burrows in the ground invaded, and I was put off. I called the Cornell Extension Service and described these creatures, and the gardener there said with reasonable certainty, but still leaving wiggle-room, that these wasps would not sting. Nevertheless, I was fat and having hives and generally tired out from taking care of a toddler and so I let that garden go.
Now I have this gigantic garden, and well, that brings me back full circle. Ungrateful? You bet!  I have this feeling we jumped up a couple of levels too many in our homeownership phase of life. We skipped the starter home, and now we have the home you move to when you can afford a little outside help with the yard, or you have enough time and interest to spend your entire life taking care of it. I feel a burden to carry on what Mrs.W, who raised 5 kids here, put in place, because I've met Mrs.W, and she's a formidable woman, as well as a retiree who lives not far from her long-time home.
Retired Marine Jerry had no regrets about paving. He once told me he didn't want to garden no more. So he enjoyed his days in a folding chair on his front stoop. Joanne his invisible wife might once have enjoyed digging in the dirt, but she was consigned upstairs by some mysterious illness. She was a frail, skinny lady. I saw her every once in a while, going from the house to the car, but otherwise she stayed inside. Apparently by the window, because when we went upstairs in our fourth year there to tell them I was pregnant, she said, "I thought so! I says to Jerry, 'Either she's getting fat or she's pregnant.'"
We had our first baby there, and we didn't garden there no more.
Posted by Hope Perlman at 6:07 AM