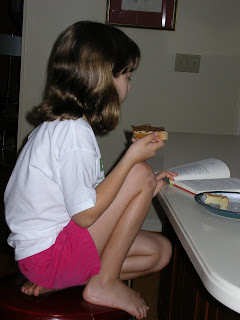 It was a perfectly innocent suggestion by our groovy piano teacher. Let's call him Alan. He lives just down the street from where my younger daughter goes to camp. So, why not let her walk over to his house for her lesson?

She loved the idea. He assured me he had other kids who did it. Kids who went to school there. "8 year olds?" I said. I love the guy, but he has no kids (and very silky white chin-length hair and came of age in the late 1960s, early 1970s.) "Sure!" He said. Naturally, the daughter loved the idea. Frankly, I didn't mind it, either. Camp and piano lessons are on the same side of the quasi-major road. Only one side street would need to be crossed. The distance: one and a half blocks. Still, I hesitated. When I've got a parenting question, I head for the books. If the books don't answer me, I ask around. Parenting by committee, the recourse of the insecure.

I asked around. Most parents were dubious, some outright against it. One said, ask the camp director. One and only one said she and her husband have stopped asking what other people do and have decided to make their own decisions. This was novel. I put it aside for further research, as I do all untested theories.

I asked the camp director. Her wrinkled-up nose and shaking head told me much more than her polite words: wouldn't recommend it, were the words. You're crazy, was the implication.

Still, the bee was in the bonnet, thanks to Alan. And there I was, knowing my daughter could certainly handle it, thinking of all the freedom I had as a kid, thinking of all the recent articles about this question of how much freedom kids used to have versus how scheduled and escorted they are now. Just yesterday, I read an excellent chapter in Michael Chabon's non-fiction book Manhood for Amateurs in which he examines exactly this point. In fact, I felt as if I were reading my own thoughts -- as they would be written if I were a Pulitzer-Prize winning male writer. It's not really surprising that I share similar thoughts with Michael Chabon. Judith Warner discussed this question in her column a couple of years ago. All of us are about the same age, and share similar socio-economic and cultural backgrounds. It's not a wonder that we compare our childhoods of benign neglect to the way kids' childhoods are run these days and come up scratching our heads. How did we let this happen?

The question has been answered pretty well. The next step is the solution. One of the major problems with deciding to let the kids go "free range," is that not too many others are doing the same. The big difference between now and then, is that back then, when I was climbing through the dining room window of my friend Kelly's house because she'd lost her latch key, there were lots of kids all around doing similar things. Safety in numbers and all that.

One of the daughter's qualities is perseverance. The subject did not drop. I'm sure her ability to nag incessantly means only good things about her personality. I believe I read not too long ago that perseverance is one of the hallmarks of the successful person. So, the first week's piano lesson rolled around and I skirted the decision. I parked out front of Alan's house, walked over to camp, signed her out, and let her walk ahead of me to his house. She spent a very long time at that corner before crossing, turning her head side to side to check and recheck and recheck. I kept mum.

Week two came around. This kid is capable. Honestly, when we lived in the city, she used to like to tell me all the different routes we could take from our apartment to school, to the 92nd Street Y, to her sister's ballet school. She has a better sense of direction than her older sister. When I allowed them to take the elevator downstairs and go around the corner to buy me a coffee from Gourmet Garage, I felt secure knowing that big sister would have little sister beside her.  I wished I'd never said anything to the camp director. But I had. The husband said forget it, the camp probably wouldn't dismiss her without a parent present. I considered writing a note, but decided I couldn't take the censure if I insisted on this extreme decision. So this time, I drove to camp, parked at the end of the driveway, picked up the daughter, signed her out, walked with her to the car, traded her backpack for her piano books, and got in the car without her. It took me a couple of minutes to make my way around the circular driveway with the other pick-up cars, so she had a head start.

I passed her on the street. She was striding with purpose and pride, and I felt it was a reasonable compromise. Although I was aware that my presence down the block, while freedom for her, was nothing like the freedom I experienced as a kid growing up in Northwest Washington, DC. By 10, definitely by 10, I was walking about half a mile along Connecticut Avenue, crossing major intersections-- to my shrink. At 8, I was definitely walking (running, racing, hurling myself across the neighborhood streets) alone or with friends to blow my allowance on candy at Broad Branch Market, and to play unsupervised at Lafayette Elementary School's playground, three blocks from home. On wrought iron monkey bars and cement tunnels and ramps. Unthinkable these days.

I considered honking as I passed, but opted against it. She was concentrating. I could see how much the journey meant to her. I parked and crossed over to Alan's house. Trees blocked my view of her and I denied myself the satisfaction of planting myself in the middle of the sidewalk and watching her walk toward me. Covered by the trees, I sat on Alan's front steps, pulled out my book, and waited a little anxiously for her to arrive.
Posted by Hope Perlman at 11:04 AM