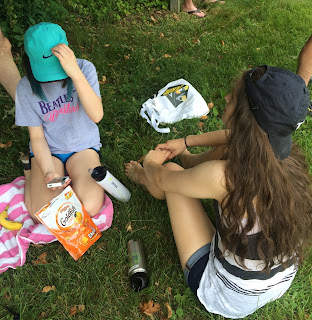 Since last I wrote, we have successfully deposited the college student in her dorm. We have successfully provided the bed with the following supporting materials: a mattress topper, a mattress and mattress-topper allergy-barrier cover, a mattress pad; and sheets, a duvet, and a fuzzy blanket. We have met the roommate and found her nice. We have met the college president, who walked through the halls as we were unloading, all of us sweaty in the very humid, hot, unair-conditioned dorm. Within moments of arrival, the college student soon had her wall decorated with strings of lights and a collage of photos. Not a one of her family, I will mention. That’s okay. I’ll sit in the dark. (You’re supposed to say that with a Yiddish accent. “That’s uhkay, I’ll sit in the dahk.”)

As we were leaving campus, we passed a trio of mother, father, and new college student laden with bags and bins from Bed, Bath, and Beyond. The mother snapped a photo of her daughter and said aloud, sort of to us and sort of to the trees, “I’m leaving my firstborn at college. How is it possible?”  Her plaintive, confused voice could have been mine. “I just said ‘goodbye’ to mine,” I said. Then my voice cracked and I pushed my sunglasses up my nose. What else was there to say? There were many of us bewildered moms and dads and sad siblings orbiting the campus that day.

This is the fruit of success, Readers. I say this with bitterness. Bitterness - because “they” all say that success can be empty. There are several reasons for success to be empty. There’s aiming for the wrong things, things that won’t actually bring fulfillment, things like money or fame or, you know, objects. We’ve had that drilled into us, after all. Rich men and camels and eyes of needles and heaven and such. Success can bring money, but money doesn’t buy happiness. Although, up to a certain point, in fact, money does buy happiness, it’s just that excess money doesn’t. But I digress.

Other ways success can bring emptiness include an all-too-human tendency called hedonic adaptation, a tendency for people get used to their circumstances, good or bad.  I suppose it’s a type of regression to the mean, returning to a base level of happiness, which is a tendency of organisms, which we humans are. We seek homeostasis, right? This adaptation is good when you’re in a concentration camp, for example, because it allows you to endure and ultimately survive - unless you get killed, I mean. But in regular life, it can mean that once you attain a longed-for, worked-for goal, the happiness it brings you pales. For example, for years I wanted an agent. Now, I have an agent. This was super exciting for me for awhile. Now, however, I’m anxiously awaiting the next step: the publisher. (Please send good vibes, even if you don’t believe in sending good vibes)

And then there’s the dubious success of raising children who leave. Literal emptiness. Which brings me back to my favorite subject, myself. How am I feeling? Last week, a friend invited me and another friend out for a “sad moms coffee.” We met when our children were toddlers in preschool. One sad mom summed up my feelings about the college student’s departure perfectly. “I know my child is where he is supposed to be, and I wouldn’t have it any other way. But I am mourning the end of his childhood.”

Naturally, this coffee event ended in tears. No, it didn’t end in tears, because we are not total idiots. It contained tears, though.

And yesterday, the first day of school in our town, a friend texted me after her two kids got to their first days of middle and high school, that she understood how I must be feeling about the college student being at college and the 9th grader starting high school, because she was so sad and crying. I texted back with attempts at sympathy, saying something about how every life landmark our children reach creates mixed emotions of pride and nostalgia, but really, I couldn’t help adding, “Yeah, we’re gonna get old, mama.” Which is what this is all about, isn’t it? I mean, not about the getting old, which we will be lucky to do, but about the end result of all this life: death.

This may have something to do with the well of hypochondria I’ve fallen into this week. There was a tooth scare (it’s fine), and a pulled muscle in my torso somewhere that I know is from the insane amount of weed-pulling I did this weekend but that I fear is something ruptured or malignant.  Even a mosquito bite on my neck that flares up when I watch TV has me twitchy. I kid not. Zika? Malaria?

Now, perhaps this post is not as uplifting as I might like it. So, I offer this tidbit of wisdom from the definitely wise Pema Chodron. It's something I'm working on right now. Perhaps you should, too.