Readers, as I prepare to pack up the car and the 17-year-old and unpack her into her first college dorm room, this post feels appropriate. It's about how much parenting changed me, and how little prepared I was for the ways it would change me. I feel the same way about this milestone. I know it will change me, but I am fairly sure I'm not actually in command of exactly how.

I have published this before, but you'll excuse me this week for retreading this beginning.


Not so much. But I digress. This is about a sock, not a baby. 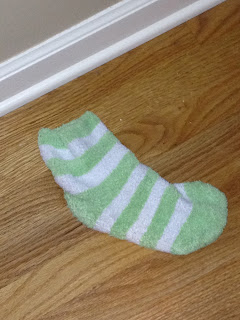 And we find, pushed back in a corner somewhere, maybe caught in the rungs of the old Dutalier glider, covered in dust bunnies, a sock.
Posted by Hope Perlman at 3:00 PM