Readers, I have a few things to get off my chest.

Meanwhile, the husband and I are waiting for the phone to ring. The 13-year-old is scheduled to call home from camp for a fifteen minute check in. We haven’t heard from her since she left a week ago, although we do see pictures of her on the camp’s website almost every day.

Every day. Because, suddenly, I have so much free time.

Speaking of reasons for which - last week after dropping off the 16-year-old at her summer dance intensive, I had dinner with some relatives who live nearby, my father’s first cousin, his son, and his grandson. My first cousin once-removed, my second cousin, and my second-cousin once removed, I think.

They are living the life - and by The Life I mean the life where the family and extended family get along. In The Life they more than get along, they like each other and work together in a business. And live near one another. This closeness is something I’ve always wanted and never managed. My only hope, really, is my immediate family, the one I created, with the husband and the children and some friends. I hope the children will want to be near and close to us when they grow up and leave.

I am going to ask my first cousin once removed and his wife for their advice the next time I see them, which will be soon, fortunately. They plan to attend the 16-year-old's performance at the end of the dance intensive.

Meantime, I have two more weeks to think about what it’s going to be like with an empty nest. Since this weekend, the husband and I and Milo the dog took a day trip that included a hike and a restaurant and sleeping in the car (Milo) and selfies, I am pretty sure it’s going to involve dogs in a way that might seem gross and annoying to non-dog lovers. (My second cousin, I noticed, has two dogs, now that his two children have grown up and moved out, even though his son lives near to him and works with him.) We felt proud of ourselves for filling our day without children. 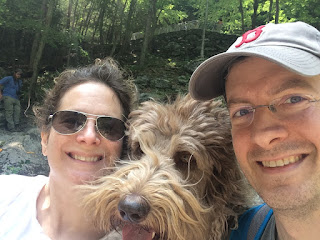 But I digress. As I sat at dinner with the cousins, I found myself asked many questions about my life and my blog and my writing, and before I knew it, I was telling them - without embarrassment, without shame, and just in a regular sort of way, about my writing schedule, that I have an agent and a book proposal. This is big for me, I realized. I have admitted to having, first, a proposal, then an agent. I have admitted to having dreams, goals, and to putting effort towards realizing them.

What this means is that I have actually succeeded in redefining success for myself - and living the redefinition. I have finally answered the question that started my whole success search.

What was that question?  The question was whether I could unhook my definition of success from publication. That was the question my old therapist asked me. Threatened me with, actually. She said if I couldn't, I risked ruining my marriage, my children, and my life.

So dramatic. Yes, but true. I was so single-pointed about success, like Tiger Woods, that nothing else seemed to register and I felt like a failure.

At the time, that question seemed like her way of telling me I would never get published. Her way of trying to make me see the truth that she saw about my failure. But I interpret it differently now. Now that I think of success as process - that old jalopy built on several key parts: motherhood, marriage, community, friendship, volunteering, financial security, and so on- I feel successful as long as I'm moving. I still have that overarching goal of publication, but I am celebrating the small steps, the mini-goals I achieve.

In the past, admitting to trying without knowing if I would succeed was just too embarrassing to contemplate. I felt like people would roll their eyes and snort in disdain if I dared to admit to this wish. I used to feel like I had to keep the big goal secret. The mini-steps, too. All that effort, which might end up with no result embarrassed me. I felt ashamed to admit to any of it. This amounted to stifling myself. And having nothing to talk about at dinner with relative strangers.

In short, I had a very results-oriented approach to goals and success. I had a fixed-mindset about success, as opposed to what I have now, a growth mindset. (Thank you, Carol Dweck, for changing my mindset.)

So, yes, I have found a way to feel successful without having a published book. And because of that, I can share my small victories. I appreciate them for themselves, and don't discount them because the ultimate goal is still uncertain. I appreciate that this moment and this smaller accomplishment is worth it in itself, because I’ve worked hard. And also, because, let’s face it, life is short and uncertain and today is the only day we have at hand. So I might as well appreciate it.