Last week, after spending two long hours taking care of my car's regularly scheduled maintenance plus unexpected fitting with new tires, I treated myself to a visit to our local cafe. While sipping my decaf, I felt suddenly light-headed. I immediately assumed brain cancer, at which thought my heart began pounding at high anxiety and I began feeling over-warm; reason soon suggested perimenopause. Occam's razor and all that.

Needing air, I wandered outside and down the block to Peaceful Inspirations. I don't think I need to explain what kind of store it is. But it is interesting that my little town center has, besides the coffee shop and pizza places, and a nice book and gift shop, an integrative medicine center, yoga and Pilate's studios, and Peaceful Inspirations. It's like a microcosm of Berkeley, or Cambridge, MA, places I hold dear.

And you thought Upstate New York was conservative...

Anyhoo. I wandered into the new age store, and discovered a bookshelf devoted to success. Only in this store, it's Abundance. Abundance is the mystical-spiritual term for Success. I scanned the shelf and found many of the usual suspects; but I also found a book by a woman, Florence Scovel Shinn.  Written in 1925. Twelve years before Dale Carnegie began winning friends and influencing people.

So natch, I bought Florence's book, The Game of Life and How to Play It. Because she wrote it a long time ago, and because I'd never heard of her. And because she was a woman. Unlike Dale Carnegie, of whom I have heard, and who was a man.

The other reason I had to buy it was that when I opened it up to the table of contents, I saw this: 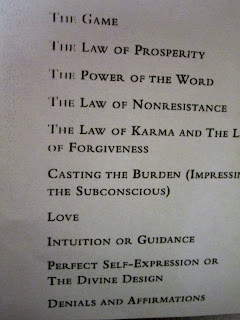 And I had just begun reading Deepak Chopra's book from 1993, The Seven Spiritual Laws of Success, whose table of contents is this: 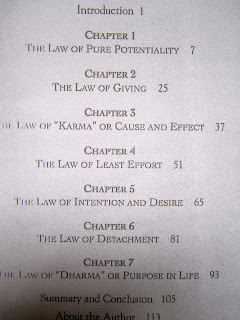 So either Deepak Chopra owes a debt to Florence Scovel Shinn, or I haven't read deeply enough in his books to learn that he has indeed credited her with inspiration.

A third possibility is that Chopra and his ilk and Shinn and hers, arrived at similar conclusions independently, coming from Eastern spiritual philosophy and Western respectively. The so-called Wisdom Traditions, which is the semi-academic name given to these books that all seem to suggest the same types of spiritual practices as the key to success--excuse me, my tens of readers, I mean abundance--is a general public-domain type deal. In other words, everyone who draws on it, is drawing from such an established and understood pool of ancient wisdom that, you know, copyright isn't necessary to be observed.

There's not a single book I've mentioned lately that doesn't mention meditation, relaxation exercises, and positive thoughts as keys to success. This hodge-podge cross-fertilization of Hindu- Buddhist and Judeo-Christian ideas has been around for a long time. It blended into a strange mix of new ideas in 19th Century America.

William James, psychologist, philosopher, brother of Henry, and a dabbler in spiritualism himself, if memory serves, described Shinn's precursors as Mind Cure people. They called themselves members of the New Thought movement. Whatever they were called, they believed that through proper prayer and thought one could cure any physical or mental ailment.

Through prayer and thought, did I say? Yes, I did. That would be through AFFIRMATIONS. Shinn's books are chock full of miraculous cures for everything, especially poverty (she wrote from the 1920s through the 1940s) using prayers and affirmations in the name of JESUS.

The corollary being not so kind to the sufferers of chronic or acute illness or emotional problems, or the unemployed. Blame the victim anyone?

But I digress. And I haven't even gotten to Deepak. Another time. I've reached the maximum acceptable word count for blog posts.

Besides, I've got to meditate. And review my affirmations.