Giant Elephant in the Room

There's a story about me and a giant white elephant that my (step)mother liked to tell. Depending on my stage of life, I've listened with different degrees of grimace. It has become one of those family myths that supposedly defines a personality.

I remember this well. We were at my grandparents' for Sunday dinner. I was four or five. The elephant was plush, white and wore some sort of embroidered saddle. It was nearly as large as I was, and I wanted to get it across the room. The grownups were at the dinner table, and I really, really needed help. Or someone to do it with me. Or for me. Whatever.

"Ha, ha, ha," the story always concludes, "there you were, crying for someone to carry that giant stuffed elephant across the room, saying, 'I can't do it, I can't do it,' and all the while, you were doing it."

Now I’ve always heard this story with some degree of humiliation; but depending on my decade or stage in therapy, it’s had different meanings. For years the meaning was, Listen to how my (step)mother likes to humiliate me with this story; wasn’t she mean, weren’t they all mean, to just watch poor, motherless little Hope struggle to carry the giant white elephant across the room? Why didn’t they help her?

A later version, more evolved, went like, Listen to the subtext of this story: poor, motherless little Hope could carry the elephant, but she didn’t realize she could, and she really, really wanted someone to help her, so she wouldn’t have to do it alone. They, the mean grown-ups, thought it was more important for her to realize she could do it on her own than to give into her wish not to have to.

Perhaps the most evolved version is, Look at the situation. The poor old grown-ups are exhausted, they just want to relax and enjoy a dinner someone else cooked for them, and the last thing they want to do is get up out of their dining chairs and help that annoying, perpetual-motion machine known as Hope drag yet another goddam toy out into the living room.

I thought of the story the other day when I came across a diagram I drew in my Success notebook (more on that later). 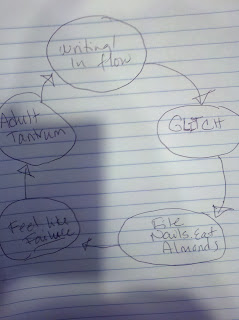 Okay, so there’s my creative cycle. Any one segment of it can last from hours to months. The gist of it is, though, that despite how I flail, I do get back to writing eventually. It’s just part of the cycle.

I’m having a problem with the voice. A problem with my protagonist. I also ran into a problem with the plot when the housing market imploded. Glitch city. So instead of working on it, I’ve written other things, tried to get paying work, and started this blog, when I was feeling really, really bad about everything.

When I looked at that creative cycle diagram in my notebook, it occurred to me that this whole Success/Failure thing I’ve been writing about here is one gigantic tantrum. A productive, entertaining and engrossing (I speak only for myself here) one, but a tantrum nonetheless. A gigantic wail that starts out as “I can’t,” morphs to “I don’t want to,” moves to “but I do want to and I am allowed to want to,” and will eventually end up back where I began, revising my story.

Do you know what this means? It means that my (step)mother was right.

My stepmother was right? Well, I don’t have to tell her. Luckily for me, she’s developing Alzheimer’s. Which means, I guess, that if she remembers to tell me the elephant story one more time, I won’t hold it against her.