When we left off, I was reading a book about 12 steps to becoming a person of impeccable character and manners. Here's that post, in case you missed it.

Not that I have been particularly rude. But I did experience some road rage the other day. I ended up flipping the bird to some twenty-five-year-old dude.

Maybe I shouldn't have returned the book to the library quite so soon. It was due, though, and it would have been bad manners to return it late. Especially since it's a new book, and it had a hold on it. I didn't spend enough days with it to establish all the good habits it recommends.

As I mentioned in my previous post, reading that book made me aware of my shortcomings around consistency. I am not consistent. I’m not consistently inconsistent, either, I hasten to add. But over my life, I see, much as I wish I didn’t, my tendency towards failures of consistency. These failures affect myself, particularly. I’m the one I usually let down. If someone else is depending on me, I'm there, on time, or perhaps even early. If it's for me, though, the winds of willpower drop away and leave me in the doldrums.

Just the other night I had plans to go to an event, a political gathering. I was tired, though. The meeting was scheduled for late afternoon, and that's when my biorhythms are low. (Anyone remember biorhythm theory?)  My point is, I was going to poot out. I was going to stay home, eat almonds, and snoozle on the couch. The husband nudged me to the door, though, and I went. And, yes, the moral, Readers, is that I was very glad I had gone. I needed that nudge, though, to get over my inertia. I did not have a habit of consistency towards myself.

And so, I had to face my lack of consistency. I fessed up to it on my monthly phone call with my college friend C, and E.

Now, it’s easier to fess up to a bad habit if you’re not currently engaged in it. So when I told them I realized I had a problem with consistency, particularly around my writing and things that were mostly for me, I spoke from the middle of a pretty decent streak of daily work on the book. But I knew that if I hit a bad patch with book, my consistency would suffer.

Afterwards, my college friend C sent me a chart called the 66-Day Challenge* and I’ve been using it to keep going. Here's a photo of it: 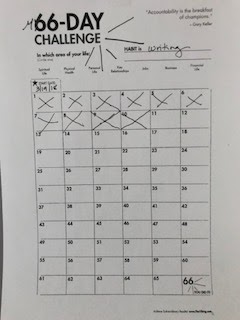 This 66 Day Challenge apparently was inspired by Jerry Seinfeld. He gave an interview, which I, too, read. I, too, was struck by the comment he made about his work habits.** That is, he writes every day. No matter what, he writes. The husband pointed out that Jerry Seinfeld doesn't have to write very much. He writes jokes, not novels. One-liners. Not essays. But to the husband, I say, "Pish! Humor writing is hard. Being concise is hard. Concise humor writing? Well, how many Jerry Seinfelds are there?"  Anyway, the husband was joking. This may underscore my point about the paucity of Jerry Seinfelds.

To help himself stay motivated, Jerry hangs up a giant wall calendar in his office. He puts an X over every day that he writes. He started doing this long ago, and the desire not to break the chain is sometimes what he needs to get to work. “Don’t break the chain,” he says. That's the secret to his consistency. That’s all.

“A foolish consistency is the hobgoblin of little minds.” So said Ralph Waldo Emerson, philosopher.

What about a non-foolish consistency? That’s what I’m after.

I have to clarify my terms here. Consistency as I am using it means reliable, regular, dependable. R.W. Emerson seems to be using it to mean irrational rigidity.

“I’ve been exercising my whole life—and I hate it,” my father said, not long ago. He is 92. Is that a foolish consistency? No way, José. That’s a rational consistency. I also thought it was probably untrue. Would he really do something he hated voluntarily his whole life long? I doubt it. Perhaps because it’s untrue for me. I like to exercise--usually. My dad is the person I credit with demonstrating this habit. Is that ironic? I think it is. “It’s almost always better to exercise” is one of my slogans, and I enjoy it. Exercise, I mean. Well, and my slogan. I enjoy that, too.

But I digress. When you combine this X strategy with the theory of habit formation, which says it takes a few weeks to establish a habit, you get a handy PDF that you can send around to your friends who lack consistency, to light a figurative fire under their figurative butts. That is what C did for me. Fair enough.

Hey, whatever it takes, right? I’m trying it now. You can see I’m not that far along. I am optimistic, however. I am optimistic because along with the X strategy, I am also employing the strategy of setting the bar low for this daily goal. I do not have to write for a certain amount of time. I do not have to write on a particular thing, like my book. I just have to write. Every single day. I find I like to get it out of the way in the morning. Put down some words. Put down an X. I can then put down plenty more words, but I’ve met my goal.

By the way, experts disagree about how long it takes to establish a habit. Some say it takes about 21 days to form a habit. The guy who created the 66-Day Challenge says the magic number is 66. Habit formation is complicated. So is the term "expert." I don't even know if this 66-Day Challenge guy is an expert on habits. I do know he's written a book and he has a website. Hey, kid, want a piece of candy? Yeah, he could be anyone. But his chart is a-okay.

Anyway, it’s one thing to want to get rid of a bad habit. Extinguish is the behavioral psych term for that. Extinguishing a bad habit takes one kind of strategy. Ingraining a positive habit takes other strategies. One of them is this habit of maintaining the change. In other words, don't break the chain.

We’re all just little kids inside. We like our charts and stickers. In fact, maybe I will use stickers instead of Xs. Not too long ago, I found an old folder full of stickers I used when I taught elementary school. Behavior modification comes down to reward and punishment. The reward for my habit of consistency is my chain of Xs—and my ballooning files of writing. The punishment for failing to write? I don’t think I could face my broken chain.

Let us pause and remember that a goal is different from a habit. A habit is something you do automatically. Whether good or bad, it’s programmed into you and you need to deprogram yourself, or program yourself to ingrain a habit. A goal is something you actively pursue. It’s not automatic. But of course habits can help or hinder us in pursuit of our goals. Thus, consistency in writing is a habit I want to develop. You could say it’s a goal to develop this habit. In fact, I am saying that. I have a goal to develop a consistency habit. This is a good goal to have. It’s an achievable goal. It’s even a SMART goal—Specific, Measurable, Assignable, Realistic, and Time-Related.

I'm pleased with my X strategy so far. I don't know that it's a habit, yet. As a strategy for continuing to write, it seems promising. I'm hopeful it will eliminate some of the resistance I feel when I've been away from writing and have to bring myself back to it. We all need strategies for continuing. Life is continuing. Things I am in the middle of I am still in the middle of. The book. The quest for success. The drive to be kind, or at least polite. Systems are going, which, to be honest, is something I appreciate more and more. Every day I wake up, I’m grateful for that consistency. Trite but true, as someone wrote on someone’s yearbook page decades ago.

* You can download your own 66-Day Challenge chart to light that figurative fire under your friend's figurative butt at https://www.the1thing.com/resources/66-day-calendar/