Authentic Grit and How to Get It

It feels important to let you know that the other day I spent quite a bit of time picking burrs out of the dog’s butt. That was my reward for taking him on a walk in nature as opposed to along the sidewalks and streets of our neighborhood.

After I picked out the burrs, I deposited them in the trashcan in the study. Later, I discovered the dog, Milo, investigating that selfsame trashcan. “Get out,” I told him. He obeyed my command with an attitude similar to one I have seen from my children when told to do something they are not that excited to do. Like empty the dishwasher or remove their socks from the kitchen counter.

A few hours later, I noticed his muzzle fur had a funny whorl. He gets those sometimes when he sleeps in his cushy dog bed. A few hours after that, I said, “Milo, what’s with the whorl?” And I went over to him and felt it. What did I discover there?

I know you’re all quick, Readers, so you know the answer already. Those burrs. The ones I had painstakingly removed from his butt. Yes, they were now in his muzzle.

Life feels like that sometimes. I have to admit it. It’s not always a forward progression. Sometimes it’s circular.

This simple anecdote should suffice to convey the tenor of my week. It was one of those weeks when thing after thing happens that makes me feel like I’m barely above water. One of those weeks that throws me off track in my personal pursuits.

That is why grit comes in handy.

I finished Caroline Adams Miller’s book, Getting Grit. Now I know how to build grit. "Building grit" is an oxymoron, isn’t it? After all, grit is what remains after rock has worn down. Grit is what’s left. Grit is sand. (See last week’s post.) I think we can all agree that grit is good. It helps us keep on treading water when the side view mirror needs to be replaced because someone who shall remain nameless, one of the three drivers in the family, knocked it beyond askew; when the other car goes in for regular maintenance and comes out with a definitely unnatural knocking sound that turns out to be a broken bolt in the brakes; when the dryer breaks, and so on. "So on" in this case means I forgot to mention that when we returned from the beach, we blithely drove into our garage, forgetting that there was a large luggage container on the roof of the car and damaging the garage.

And there was more in the last week, but I was letting the dog’s muzzle whorl stand in for it all. That went well, didn't it? 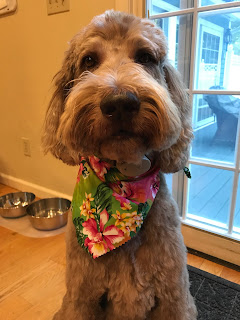 Anyway. There’s grit and there’s grit. The kind we want, Readers, is “authentic grit.” Authentic Grit is not the same as persevering at all cost. Authentic grit is “the passionate pursuit of hard goals that awes and inspires others to become better people, flourish emotionally, take positive risks, and live their best lives.” Grit is positive, she says, only if it is a force for good.

Welp. I feel cowed. That is a tall order. Especially when so often my life is about burrs in muzzles. Metaphorically and literally. Nevertheless, I persist.

So. How to develop authentic grit? Well, developing grit depends on, as CAM says, “experimenting with” the several qualities she mentions in part two, working on each of them. These are the ingredients of what she calls the “Grit Cake.” And working with each of the ingredients, over time, will help us evolve “from a cook who masters one behavior at a time to a master chef who blends them all.”

So, here they are:


Of course all of these qualities are multi-faceted. Each is a lifetime’s pursuit on its own. For example, passion. Developing passion sounds easy. But there’s passion and there’s passion. Passion can be obsessive (not so healthy) or harmonious (healthy), and managing that can take skill. And passion can be challenging to identify, if you’ve spend a lot time taking care of others’ needs at the expense of your own. Or happiness. There’s a broad subject full of complexity. For this reason, CAM suggests starting with one quality you think you most need help building and work from there.

The good news is, focusing on these things is synonymous with living a really full and fulfilling life. Developing passion and directing it towards a goal, challenging yourself by taking risks, building happiness and self-control, and learning to play the long game are all about, as the almost 10th grader likes to say, “living your best life.” She says it ironically, but never mind. I am not being ironic. Sometimes it is important to be earnest.
Posted by Hope Perlman at 5:08 PM