The Inner Game of Life

Oh my word, my desk. My desk is in such a mess. This is what working on a book looks like in my part of the world. Meaning in my study. 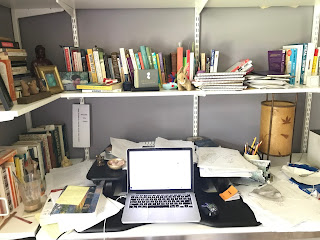 It took me way, way too long to find my notes on The Inner Game of Tennis. I had to return the book to the library, because I had renewed it twice and someone else had put a hold on it. Which goes to show you that it’s an excellent book, first published in 1972 by W. Timothy Gallwey, at that time a tennis coach. In future, a life coach. His book became a best seller, not only because tennis was super sexy back then, what with Bjorn Borg and Chris Evert and those incredible icons, but because the book spoke to non tennis players as well. Everyone likes a good sports analogy, so learning to play tennis well became an analogy for success in other (business) realms.

And, in fact it transpires that I have not found those notes. If only I could find those notes. I found the dog treats I use to lure Milo to sit with me upstairs when he would rather patrol downstairs. I found the little sticky note tabs I like to mark pages with when I’m looking for juicy quotes. I found the chunks of Himalayan pink salt I bought from a Himalayan pink salt-and-other-holistic-and-New Age-gewgaw-selling shop in Troy. The 9th grader and I were showing our French exchange student around and I felt too guilty tromping in and out without buying something. Salt, like talk, is relatively cheap. Also, if it actually does absorb the bad energy from my laptop and purify the air, as claimed, then—yay! We were looking for hipsters that day in Troy, by the way, since apparently they’re not in our exchange student’s town in France. No hipsters in the Himalayan pink salt-and-holistic-gewgaws shop. Perhaps that was to be expected. We did find a couple working in the barber shop. Then it began to rain, and we headed for the car.

But I digress. I wanted to talk about The Inner Game of Tennis, since Wimbledon is happening now. I did find a short note about the Inner Game, but not the longer notes. The short note was almost overridden by my jottings on color and value, which I took, while avoiding work on my book, from a blog about fashion and choosing the best colors for my skin tone. Did you know there is much more to choosing colors than undertones? There is also the amount of contrast. Color contrast and value contrast.

I don’t remember what any of that means, at this point.

But here are a couple of key ideas from The Inner Game. The whole book is about unlocking your potential, and if that seems like a cliché, just remember that Gallwey was one of the originators of this self-help idea. There’s so much in the book that has been taken and developed and studied and better understood over the last several decades since it was published that I see why it’s considered a bedrock text.

Unlocking potential takes some skill, but the essence of it is cultivating relaxed concentration. To do that, says Gallwey, you have to learn how to stop Self 1, which is the conscious, superego-like self, from getting in the way of Self 2, your unconscious self, controlled by the nervous system. The interplay between these two selves determines how well you can translate your knowledge into action.

Now, Gallwey is talking about tennis. Specifically, he believes that after you’ve learned the basic strokes, your Self 1 is a big saboteur. Doubt and self-criticism live in Self 1. Self 2 is the keeper of muscle memory and innate confidence. So, to perform at your best—in the zone—occupy Self 1 with something concrete on which to focus, such as keeping your eye on the ball. Focused on the ball, Self 1 forgets to be all judgmental and doubtful. In fact, Self 1 practices non-judgmental seeing. This frees up Self 2 and thus, with a combination of mindfulness and concentration and release, you have relaxed concentration.

There’s one more key skill Gallwey teaches, and that is picturing the outcome you want. For example, want to stop serving into the net? Literally and metaphorically? Picture your serve going over and landing right in the box. Then focus on the ball. Voilà.

See what I mean about all the elements that are current? You have the two selves (Kahneman). You have your mindfulness (Jon Kabat-Zinn and everyone). You have your positive thinking (you name it, she says it). You have flow (Czikszentmihalyi). You have maximizing potential. You have success.