Readers, I have been unhealthily glued to the news and social media. I have been clinging to the news and suffering mightily. As have many of you, I am sure. Probably all of you. I have awakened at a different hour each night, and every time I do, the new POTUS is on my mind. This is really unpleasant, as he is so unpleasant.  And the news is so unpleasant, and yet I search it for new disasters or hints of hope. And as Buddha said, clinging is the source of suffering.

Our family went to the Women’s March in NYC this weekend. The Women’s March, although a misnomer because it wasn’t only women - not by a long-shot - nor was it only about reproductive rights - was truly amazing. It was a highlight of my life. The MIL joined us, as did a friend of hers. It was so much more crowded than expected that soon the police had to open up the route to allow more people to flow. Well, “flow” is the wrong word. There was almost no movement. It took hours to go a few blocks. We all had to climb over a barricade at one point. I was so impressed that the MIL wanted to go, seeing as she is a grandmother, and there weren't that many grandparents there. And I was impressed with myself and all the other people I know who conquered their fear of crowds and of being stuck without access to bathrooms and of potentially being in a melée.  Well, my bladder held up and there was no brawl.

Instead, it was peaceful, it was communal, it was a mixed crowd of genders and colors and issues all being compassionate and polite - except perhaps for the person who was smoking what was probably the largest doobie I have ever laid eyes upon. Perhaps some of my bliss came from inhaling that….
but, no, I felt it before I smelled it. The thing was, it felt so good to be around other people who care about the same things I do. And to realize that the crowd was much bigger than had been expected. And then to check social media and see the reports of the marches all around the country and the world.

And yes, I know, the biggest crowds were on the coasts, which makes some people think this didn’t count. But I don’t believe it. I think the coasts are awake now, and some of the cities around the country had smaller marches, but still had marches, and those liberals are awake now, too. 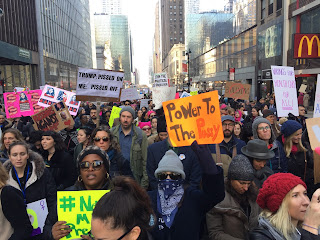 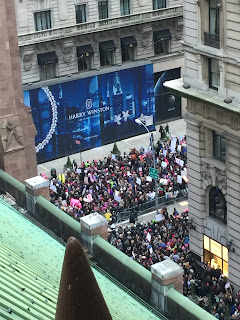 Look, I’m not going to have my inspiration sucked away by nay-sayers. It’s true that demonstrations aren’t policy; but they are important. I’ll just speak for myself. I found it fortifying to know I’m not alone in my concerns and in my views. And this knowledge has made me willing to be politically active, something I have not been in the past. I trust others will take away that energy, too.

There is no way but forward. Forward through the mess. But still forward.

I read an interesting article about how California is always a harbinger of the future. It has transformed from Republican destruction - with great damage to its public education system, mind you - to a progressive agenda now. I’m not hopeful we will escape the damage part, but I am hopeful that we will move forward with environmental awareness, clean energy, civil rights, and all that good stuff.

But most of the time, I am roiling with anxiety. I'm anywhere but present and centered, as I'm reading up on what just happened and perseverating on what might be barreling down upon us in future. This is the opposite of being centered and present.

Bartenders and hair stylists are often amateur psychologists. Mine is no exception. My hair stylist, that is. I don’t have a regular bartender, at least not yet. Anyway, my stylist - let’s call her Dawn - I saw today. In the nick of time, since, as I mentioned above, I am suffering from clinging to the latest news and updates regarding the current political situation on my social media feeds. Well, of course, we did broach the topic, because how could we not? Yet Dawn was smiling and calm. How was this possible? She said she limits herself to fifteen minutes of NPR on the way to work and fifteen minutes on the way home, and that is it. She did, she said, watch the Sunday morning news show this weekend with a friend and got a gander at the Portrait of Dorian Gray that is Kellyanne Conway, spokesperson for POTUS. And was shocked.

Since she hasn’t been watching or listening to much news, she was actually pretty darn cheerful. Imagine that! We chatted about her recent eye surgery, the results of which are thrilling to her.

“So tell me what it’s like to have eye surgery,” I said. And she did. When she mentioned with nonchalance that the laser malfunctioned the first time, I was traumatized by proxy. Then, when I asked her how they keep you from blinking, she said, “They use what they use in gynecological exams - a kind of speculum” - and proceeded to describe how it works. Scenes of horror flashed for me.

“Were you anxious?” I asked, anxiously. “Were you sedated?”

“I don’t get anxious,” she said. “And they did use Twilight on me.” Twilight I think is that delightful stuff that killed Michael Jackson. It really is good. I’ve had it for procedures and you feel so rested afterwards. Unless, of course, you fail to awaken.

But I digress. The important bit is the bit about Dawn not getting anxious.

“How can you not get anxious?” I asked.

“I have bad knees.” This sounded like a nonsequitur, but Dawn is a storyteller, so I waited. “This therapist I see told me that all the trauma I've suffered in my life" - and she has indeed, I know. I waited for her to say this trauma has caused her to dissociate in times of stress, because otherwise, why was she so calm?

- "all the trauma has left my soul intact, but it all manifests in my body.”

She continued working in silence for a while and then I told her about my recent experience meditating. This was yesterday. I figured I had better try to center myself (scaffolding of success, key to functioning in life) by meditating while the ninth grader studied and the husband commuted home. And how during the thirty minutes I set aside to relax and detach from the world and cultivate peace, the doorbell rang - the doorbell, I tell you - and then my phone, which had been pretty quiet all day, started receiving text and after text. I heard them all come in, but the phone was downstairs and I was up, so I couldn’t turn it off. So much for peace.

“Okay, here it is. He says, ‘That thing you think is true? It is not true.’” Which is another way of saying it’s all in your head. So don’t worry about it.

This sounds facile, I realize, Readers, but it reminded me of a truism I picked up in Cognitive Behavioral Therapy that is similar: Just because you think a thing is true doesn’t mean it is. Your fear is just fear. It doesn't mean the thing you fear is true. It might come true - true - but then again, it might not.

So, I leave you with that.

*An American West Coast guru, according to the interwebs.
Posted by Hope Perlman at 6:37 AM