Warning: Expletives abound. According to recent reports, my use of expletives means that I am both highly intelligent and very creative. Or, alternatively, tired and lazy and unable to think of synonyms. 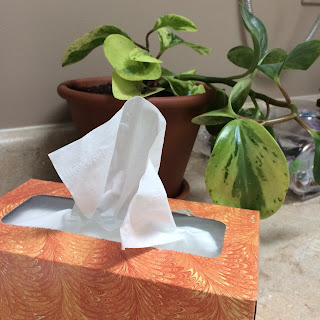 Oh, my God, what a week! The things that go on! The frauds being perpetrated on we unsuspecting masses. Well, I will remove me and my ilk from “unsuspecting masses” since I am actually pretty much always suspecting fraud. But sometimes it happens so egregiously that I am taken aback.

I am talking about my electric toothbrush. What kind of world are we living in where I buy an electric toothbrush (at the recommendation of my dental hygienist) in February, and by November I can no longer buy replacement brush heads for it? Fuckwads. That’s what I have to say. Seriously. Now I have to try to bushwack my way through bureaucracy towards a refund. I still have my receipt, fuckwads.

And then there is this. That I was standing in a store the other day, possibly CVS, I am blocking it out right now, because the experience I am about to relate was mildly traumatic, and also because I bought that damn electronic toothbrush from CVS - let the buyer beware - when some younger person approached me and asked if I had a tissue. I was startled, because this was not a shared tissue experience. For example, it wasn’t next week, and we weren’t both overwhelmed by joy that a woman had finally been elected president or something. We were both in a store for our separate reasons. And of all the other people nearby, this younger person asked me for a tissue.

It has come to this, I thought. I appear to be a person who would have a tissue. That is, I am a woman of a certain age holding a substantial tote bag over her arm. Of course I did have a tissue, and for some reason, this made me feel ashamed for a second.

Readers, I can’t totally explain this feeling. But it happened.

Of course the thing about me is that I have pretty much always had a tissue. I mean, since I began carrying a purse or a bag or a pouch or a backpack or a messenger bag or a diaper bag, I have had tissues. Really, I am that kind of person. In fact, I can say with truth that if any of you has ever been with me when I haven’t had a tissue, it has been because I have just run out (in recent years, having children, and now total strangers, who depend upon my tissues) or because I have intentionally left home pretending to be devil-may-care and Butterflies-are-free-ish (in former times). So really it was not, perhaps, a reflection on my age, per se, that caused this younger woman to approach me. Perhaps she simply recognized that I am, essentially, kitted out with tissue.

So I tell myself.

And in other worrying news, I have discovered that members of my extended family, members who have always exhibited great compassion, members whom I have always loved, will be voting for a certain person for President next week, and I cannot understand this. Perhaps it is just that the world is going to shit. Or poop. Or poo. Or whatever you want to say. Actually, I don't really think so, or I wouldn’t be able to cope. I believe what Diane Cameron wrote about in the TU last week (http://www.timesunion.com/tuplus-opinion/article/Cameron-Trump-forces-us-to-face-our-own-set-of-10422399.php), about a certain candidate and his supporters - the inhabitants of the basket of deplorables - being the Jungian shadow side of recent developments in our collective endeavor here in the US and in other Western democratic type countries. The shadow side of the push towards equality and away from racism is these deplorables. And a shadow is insubstantial, ultimately.

However it goes on Tuesday, I’m gonna need a tissue. And if you need one, I will have one for you.
Posted by Hope Perlman at 2:31 PM