To Thine Own Self Be True 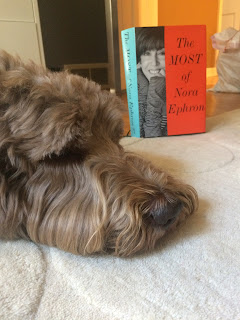 Nora Ephron’s voice reminds me of mine. It’s a lot stronger, more confident, more full of panache, but the inflections and repetitions are like mine. I was thinking this while reading Heartburn in my Nora Ephron reader instead of writing this morning. It’s a funny book. I was listening to the sounds in my head. It read like a movie script. It read like her essays. Her voice came through even in that novel, which I think was her only novel, published in 1983. She wrote most everything she became really famous for after that novel, for which she became famous, and which she published at 42, if Wikipedia is correct. I was lying in bed in my fuzzy bathrobe with my feet under the quilt thinking my writing sounds kind of like Nora’s. Then, before I could stop myself, I was also thinking about the article I glimpsed in the  Sunday paper but was too traumatized by to actually read. It was an article, probably in the Book Review, about an author who was a huge bestselling writer in the 1950s, a huge - yuuuuge - success in other words, but who is now forgotten. I’m sure it was about how often that kind of thing happens. The being forgotten part, I mean. It’s about what I aspire to, isn’t it? I mean, it would be foolish to aspire to more than being forgotten. I mean, no one thinks they’re going to be Jane Austen. Or Jane Jacobs. No Janes. The most people think about when they think about writing success is The New York Times Bestseller List. No one thinks beyond the list. Everyone wants to be on it. But how many people on it today will be remembered tomorrow?

Just glimpsing that article and skimming the first paragraph was enough to trigger a total confidence meltdown and an upsurge in my sense of futility. This coincided with me coming across a job opening at a good non-profit company that does Important Work. They are looking for a manager of the communications department, which reminded me that perhaps I would have been and maybe still would be much better off with some kind of office job involving writing, no matter how boring, because I would be able to look people in the eye and say I was something and did something. And prove it. I could wave a pay stub at them. Or maybe an employee identification card of some kind. Plus I would see other human adults every day. And I would have to get dressed. Lately I am interested in both dressing nicely and also remaining attached to my fluffy bathrobe. When I say attached, I mean inside it. Like, wearing it.

Why was I lying in my fluffy bathrobe on my already made bed instead of working on my book? Well might you ask, Readers. After all, I have had a discussion on a telephone involving an agent and an editor at a reputable publishing house that has resulted in an invitation to submit more work. So why am I not scrabbling and scrambling to pull together more work?

Two reasons. One, I have an overly expansive view of time. I’m “taking a couple of days”, suggested by my agent, to think over the conversation with the publisher before fishing around in my book drafts for more material to revise. A couple of days from the conversation would have brought me to Saturday. Today is Wednesday following. See - expansive. But I don’t think my agent meant to include the weekend. I went away for the weekend to visit family in Washington. So how could the weekend count. So, really, it’s only been four days….

Two, I am procrastinating.

The shade of Steven Pressfield holding a copy of The War of Art in one hand and Do The Work in another is looming. I suppose this means there is a third reason why I’m bathrobe reading. It’s called resistance. This is Steven Pressfield’s big thing. His hook. His battering ram. Artists must battle the forces of resistance before creating art, and resistance takes many forms. Resistance is the obvious, the procrastination, for example, which bleeds into that overly expansive view of time that stretches a couple of days into several, then weeks, months, and years. Resistance, I’m sure Steven Pressfield would say, is also the sense of futility and the fear underlying the futility. So in a sense, there is only one reason I’m not working on the book. Resistance. It’s kind of the alpha and the omega of excuses.

Maybe this is a good moment to mention the episode of Unbreakable Kimmy Schmidt in which Titus gets back out there and goes on auditions for bit parts. Titus comes across an older actor, kind of his nemesis. Nemesis is the wrong word. This actor is the thing Titus fears turning into if he actually gets out there and tries. An actor whose most prominent roles have been as corpses on Law and Order: Special Victims Unit. An actor who has been attending the same auditions for the same bit parts as Titus - for fifty years. Titus is depressed by this. As am I.

This actor has attained kind of the level of success I have as a writer, in other words. Only this actor is pretty happy with his career and his life. He’s satisfied.

And then he dies. And Titus goes to his funeral. And all the other bit actors on Law and Order are there, and Ice T, the rapper/actor gives a eulogy. Ice T says this guy, this older actor, had a full and happy life. Ice T says this actor was a success because “he was to his own self true.” Which brings me back to Nora Ephron and her voice. Which is really about me and my voice. Which is really about you and your voice. Voice here represents not just expressing yourself in writing, but expressing that thing that is most you. To do that - well, it’s a deceptively simple thing to do. It's also the thing that will fill you with purpose, and therefore, it is the thing you must do.

But to get back to me. In writing, the voice is the thing that brings readers. Nora Ephron found her voice and she expressed it in novels, essays, and on film. It’s a consistent voice - because it’s hers. And who the heck knows if anyone will remember any of it in fifty or a hundred years? The point is not to think about that. (She said, reminding herself.) The point is that if you need to express your voice, you gotta to thine own self be true. Forget about who said it (Polonius to Hamlet) and therefore whether it is actually good advice. Sadly, or happily, that is me. I’ve found my voice these last few years, through my blog. I have the need to be true to it. It’s similar to Nora’s (maybe), but also different, since it’s mine. Sadly, Nora isn’t here anymore to write in her funny, wise voice. I’m here, though. I’m available to write in mine. It’s a bit grandiose and presumptuous to think this - and yet, splayed on the bed holding the very thick compendium of her writings, which includes her screenplay for When Harry Met Sally, I did think that perhaps I can pick up her baton. Since she’s not here anymore, I mean. There’s room for my voice. I intend to use it to carry my book. There’s room for my voice.
Posted by Hope Perlman at 4:43 PM