The Law of Attraction, or Abundance Mindset

Let’s talk about abundance and the Law of Attraction. But first, observe the photo. 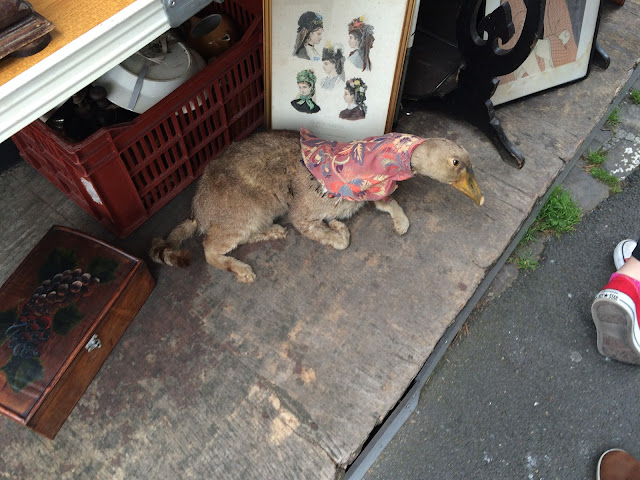 This was one of our finds at Le Marche aux Puces-St. Ouen in Paris. Le Marche aux Puces-St. Ouen was just below the Louvre on my list of must-sees for our trip. This is the famous Paris Flea Market. Or one of them. They’re featured in every home design magazine. Clever interior designers are always touting their finds from this warren of stalls and alleys. Antique bargains, clever repurposed chairs. Even though we live with situations like this, 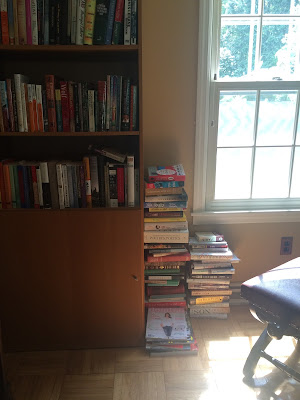 I think of myself as a decorator-manqué. So, I thought maybe, just maybe, I would find a console for our mudroom.

Well, this was our first find. A catuck? A ducat? Who can say? I’m sure that nutty fan of stuffed and mounted wildlife The Bloggess would enjoy this.

It wasn't a bargain-priced but indisputably elegant console for the mudroom. No, it was more a reflection of my mindset as we arrived at the eerie and half-deserted warren of alleys and stalls. This was how I'd been feeling of late. It’s chic. It’s wearing a scarf. But, really, it’s kinda poorly put together. And also discarded.

Oh, alright, I’m being melodramatic. But I was feeling a bit blah. Due to waiting - apparently endlessly - for an editor to accept my book proposal. I was in limbo, and enough time there and I start to feel blah. I’m trying to come up with a better way of using this taxidermy catuck as an analogy for my state of mind, but Readers, it’s just not flowing. Suffice it to say, this item was odd and so was my mood.

As I mentioned, the flea market was semi-deserted when we arrived. It was midday on a Monday, and many of the stalls were shut. I wondered if we’d made a mistake in coming to this vast place. In the moment, I lacked courage to scavenge for furniture, so I trailed along after the family, past bins of this and that.

After stumbling around purposeless for a while, the 8th grader said, “Here’s what I want: I want to find an old key that I can turn into a necklace.”

Lo and behold, a few yards along, we came across a large bin full of rusty, old-timey keys. I haggled with the seller, who wanted 5 Euros for this rusty, old, worthless key. (Bargained him to 3 - still robbery). 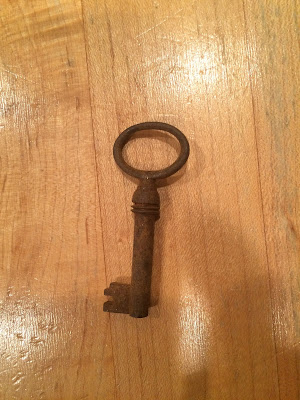 But despite the obvious rip-off price of that key, it was a great find. It unlocked something in me that I had forgotten. My first thought was a memory of one of the friends I made at the law firm where I had my first job out of college. She was a few years older than me, a divorced mom. One night, at her house, she told me that she was going to ask the universe for the right man.

“You have to be really specific,” she told me. “But you have to ask the universe for what you want.” Shortly thereafter, she did meet a great guy, to whom she is still married, several (ahem) decades later. I, by the way, apparently forgot to ask until much later.

Anyway, there by the keys, I realized that I had once again lost all sense of abundance and possibility. I was dragging around with a feeling of scarcity. A poverty mindset. This is easy to fall into when things are in limbo. This is easy to fall into when something bad happens. For example, one of my dearest friends is having a heart problem. But when the 14 year old found her key, I found that idea of abundance again.

Finding the key turned out to be symbolic, too.

After remembering Debra and her invocation of the universe, and remembering that I have at times felt connected to a sense of abundance, I wished (to myself, because of all people, the husband is definitely not a believer in that kind of hokum) that my book proposal would get picked up by a publisher soon. Two days later, my agent emailed that I had another new reader.  Coincidence?

Probably. Some people openly embrace this whole idea of abundance versus scarcity. Donna, my hair stylist, for example, was not at all surprised to hear about the 14 year old and the key.  “It’s the Law of Attraction,” she said, nodding and smiling.

So is the secret to success invoking the Law of Attraction? There’s a whole major strand of success literature that says it is. The mystic success people that started back in the late 1880s, flowered in the 1920s, and keep repeating on us every decade, like a bunch of bad burps. Deepak Chopra being the one with most credibility. That lady who wrote The Secret being one of the least. I wrote about it here.

It’s always there, this idea of asking the universe for what you want and then by your positive thoughts manifesting it. But the flip side of this is ugly. There’s a potential for self-blame that goes along with it. If what you want doesn’t manifest, did you fail to think positively enough? And if something negative happens, is that then the fault of your negativity? If you are depressed, can you never expect anything good to happen?

The grain of truth in this idea of the Law of Attraction, however, is that priming your brain really is effective in influencing your performance. Daniel Kahneman, who is not at all into hokum and who has a Nobel Prize, talks about how easily influenced the brain is. For example, in one famous study he takes two groups of college students and puts them in two rooms. To one group, he shows a bunch of slides of elderly people doing slow things. To the other, he shows slides of people enjoying vigorous activity. Then he asks everyone to move to a third room, and - this is the actual metric he’s seeking - he times them as they move from one task to the next. The ones who saw the elderly, slow people moved slower than the other group.

Or, there’s this. When I was in high school, I had a crush on a guy who drove a lime green car. Suddenly, I saw those cars everywhere. Were there suddenly more of them? Nope. I was just primed to notice them. The 14 year old wanted an old key. She was thus primed to pick out a bucket of them from amongst all the related and unrelated bric-a-brac at the flea markets.

So did asking the universe for a new reader bring me one?
Isn’t it much more fun to think so?
The result of this key find was that I reinstated my morning practise of thinking of three things for which I am grateful, and then making one wish. And just this week, after wishing that my agent would call and tell me a publisher likes my proposal - and also that the dermatologist would find no new skin cancers at my appointment - she did! And he didn’t!

Focusing on what I’m grateful for and looking for positive outcomes hasn’t erased negatives, but it has set them into the background.


I have to revise my sample chapters in my book proposal. Wish me luck! And I will keep you posted.
Onward!
Posted by Hope Perlman at 5:57 PM