One of my intermittent fantasies is that I’m an animal-loving, root-chakra, earth-mother with an open-door, anything goes, seat-of-the-pants approach to life. A woman equally comfortable in a put-together outfit and the unnaturally natural make-up look AND with a bird on my shoulder, a dog at my feet, and a steady stream of children revolving in and out of the house while I grind flax and chia seeds in my mortar and pestle for delicious, homemade food.

Then I remember about germs and therapy. But a fantasy’s a fantasy, right? So, the 12-year old wanted a pet. She’s wanted a pet, besides the dog, for a long time. And we’ve had many words and explorations about what kind. A couple years ago, she wanted a chinchilla. I considered this, until I learned that chinchillas live 25 years or more, and require cool slabs of marble for sleep, as well as specially imported volcanic dust for bathing. So she settled for crayfish. Two. Then one ate the other. Then, eventually, the survivor, who had not only eaten his only companion but also had regenerated his own claw, the survivor went caput.

I stopped the husband on his way to flushing Shrimpy. The child, who was 11 at the time, was wet-eyed and red-nostrilled.
"You cannot flush Shrimpy," I said. "She’s upset. She loved him."
"What am I supposed to do?"
"Be a father. Bury the crayfish."

And that was it, for a while. However, recently, the 12-year old began agitating for a pet. Fish seemed good, until she found out that they require work. Suddenly they were too boring. Eventually we settled on maybe a bird, one that doesn’t live 80 years, one that doesn’t squawk. One that can’t peck out my eyes. A parakeet.

At that point, I realized I had a real Parenting Lesson in front of me. You see, the 12-year old wanted that bird. Wanted, wanted, wanted that bird. Asked every day. Multiple times a day. Yes, this corresponded to the build up to the start of school. I was aware of that. I was aware that possibly hyperfocusing on this want of bird was much more pleasant than focusing on starting school, especially the challenging math class she’d be doing. But, if my pop psych is too fascile to be true, there is this truth: She wanted something. That something cost money. Therefore, here was an opportunity. Because I wanted something, too. Weeding done. So she had to weed for a certain number of hours at $10 per hour, to pay for the bird. This felt like Good Parenting.

I know I developed a feel for the value of a dollar on the late side. Like around 45, when we bought a house and two cars and had to cancel cable and limit eating out to pizza once a month and I had a mini nervous breakdown. I want my children to do better, but haven’t usually got a clue how to teach them. 90 percent of the time we forget to give them their allowance. So telling them to save 10 percent of their allowance isn’t particularly useful. What usually happens is that when the children want something, we work out some kind of arrangement based on how much allowance they’ve forgotten to collect and I’ve forgotten to distribute. This makes money an even more abstract concept than it already is. And contributes to my conviction that we are raising two grasshoppers, not industrious ants, and since the husband and I seem more grasshopper than ant, I’m going to end up dribbling onto a bib in a shabby nursing home somewhere. State run, if the state runs anything anymore; otherwise, run by some kind of half-assed Samaritan agency. 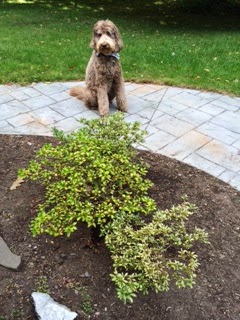 Anyway, three hundred dollars later, we had a parakeet. Scout the Parakeet, the bird paid for by the child, everything else paid for by VISA. 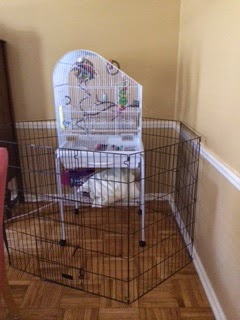 The dog was thrilled. 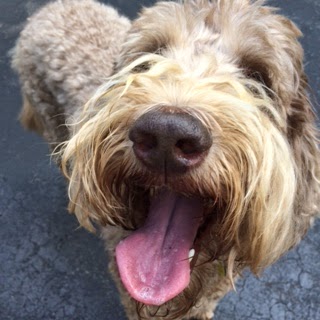 Very thrilled. So we borrowed a fence to put around the cage, and worked on finding things even more thrilling for the dog than watching the bird. It was working. We’d gotten to a certain level of calm. That is, when we ignored the bird, the dog did, too. The minute we approached Scout, however, or if Scout got a little flappy, Milo was nosing up to the gate and whining.

So everyone was learning.

Currently, I am typing to the gentle sound of Scout cracking seeds in her food dish. This is a positive development, since Milo is sleeping under the table, right by my chair, and not whining and obsessively peering at her from behind the fence around her cage, his tail quivering on high alert. So that’s promising. Next step is to be able to approach the cage and talk to the bird without having him rush up as well. It’s mellowed here, so that he only pays attention to the bird when we do.

Unfortunately, while I was driving the ballet carpool, this learning experience turned into one of those learning experiences parents don’t want their children to have. Of course I take some responsibility. I stifled my last minute warning to leave the bird in the cage until I returned home. She wouldn’t do it, I thought.

Alas, poor Scout is no more. Now the 12-year old has learned a terrible lesson of responsibility and guilt. And regret. Let’s not forget that one. And I had to learn a lesson, too. I had to practice just being there, with the arm out, saying nothing much, listening to the child learning remorse.

This time, the husband knew what to do. After he dug the perfect grave, we placed the bird in it and said a few words: You were loved; I am sorry; Your life was too short, but it was good.
Posted by Hope Perlman at 3:23 PM

Email ThisBlogThis!Share to TwitterShare to FacebookShare to Pinterest
Labels: admitting when you're wrong, humor, money and success, parenting, principles and values, suburban life