I am tinged blue today. Of course it’s the weather. The whole neighborhood is tinged blue-grey. The 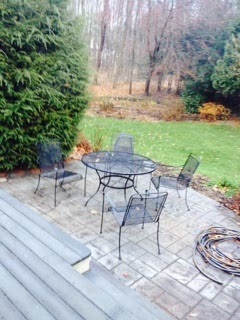 asphalt road’s dampness reflected steely grey and I needed nothing to shield my eyes when I walked the dog. It’s dim in a way that seems as if I’ll never see fully again.

But of course it’s not only the weather. It’s the 50th anniversary of the assassination of President John F. Kennedy. That happened before I was born, but not long before. I was in utero, which numbers me one in the subset of my generation that feels we just missed being part of something great. I’m of that generation that grew up feeling like the best hope for our country had been thwarted and fizzled out in a frazzle of drug addled hippies, disco, and Watergate. We just missed free love, and grew up to meet AIDS. Watergate, conspiracy theories, and cynicism shaped our worldview. We never knew a time of real optimism, just a time of grief and reaction. We grew up and were described as cynics and slackers. Now we’re coming into power, bringing cynicism about government to work with and for the government. This can’t be good. This may explain some of the gridlock in Congress. Because we turned cynical as children we turned away from the power of government to do good. So now I find myself in a world where I feel weird arguing for the natural right of a person to have health care or food. Where I’m made to feel weird for suggesting that the government should help take care of its citizens, even at the expense of businesses, like the insurance business, being able to make profits. Is that right, to make people who argue for the protection of the health and welfare of others seem like spendthrifts? As if being good with money – i.e., accumulating it – is the highest virtue.

Speaking of grief. This reminds me of something that happened the other day in my NIA class – NIA is an exercise movement class based on dance, martial arts and yoga. Our teacher starts each class with a few comments on the focus for the day (like feet, or arms or fluidity). That day, she introduced a new routine and said she had made this routine the year before, but had never taught it, because just as she prepared to teach it, her father became ill, and she had to take time off and he passed away several weeks later. So this routine, she said, was dedicated to him, and she was teaching it now, a year later. Her voice cracked and I teared up, and I would bet there was a lump in the throat of everyone in the room.

Aside from acknowledging my teacher’s loss, I was struck by one of the nice aspects of living in a small community. I know the teacher – we socialize together sometimes, and chat about our children - and most of the people in the room are at least familiar to one another. But I was moved not only by our teacher’s story, but by her sharing of it. She stood up there in the front of the room and let us all in on her grief; furthermore, she did so without intellectualizing it, but letting her emotion come through. Then she turned on the music and started the routine and returned to her more familiar, buoyant self. This reminded me, as I am often reminded, when I think of a loss I’ve experienced, how amazed I am at people. We just keep going, with our losses and traumas, big and small, lodged inside. These losses knock the wind out of us, and they retain power even years later, and yet we go on, doing our things, all of us with our losses inside. Sometimes I wonder that we’re not all just staggering around from the heaviness; but we’re not, usually. We live, and that’s a beautiful thing. Still, it was good to remember that we all have these losses inside. If we remember that, we can have compassion for one another. To see a person living and know that she is living with loss makes it hard to be cynical.

Off the soap box.
Posted by Hope Perlman at 3:22 PM

Email ThisBlogThis!Share to TwitterShare to FacebookShare to Pinterest
Labels: loss, principles and values