I am feeling validated this week. Yes, I feel validated by the re-election of Barack Obama. My teeth have unclenched and I am thrilled that the 2016 campaign for president won’t ramp up into high gear for at least six months. But I am validated in a much more important way. By praise. Praise-and Proverbs.

Yes. You see, last week, we had a visitor, a twenty-something hipster with choppy hair and a skinny headband. She arrived with her kombucha tea in a large glass jar topped with a scary looking mold called a scoby, and her Maca powder for balancing hormones (“hormones are everything,”) for the express purpose of interviewing me.
Chelsea and I met four years ago when she babysat for the kids in our apartment in NYC. Life containing at times synchronicities that seem like kismet in a pleasant way, it turned out that while I’d obtained her babysitting services through a friend in my NYC life, Chelsea was close to a close college friend of mine who worked where Chelsea had just graduated. So we enjoyed the kismet, and then Chelsea disappeared across the country, and my family left NYC, and that was pretty much that. Chelsea, which is her name, not a pseudonym, and I’m saying it and linking to her website because she’s driving around the country as part of an online project, interviewing people, one of whom was me. Or moi, as I would say if I were Miss Piggy.

Readers, are you wondering why Chelsea wanted to interview moi? Well, truth be told, I was as curious as you—no, surely I was curiouser. If I were Miss Piggy, I would take it in stride, this interview stuff, and would say, holding my well-manicured trotter to my chest, “Interview moi? Of course she wants to.” Since I am not Miss Piggy, I was mystified. It turned out she wanted to interview me because I am a writer, and while I haven’t achieved a great deal of notice as such, I continue to pursue the work, because it is my calling, despite the compromises I’ve had to make, and despite hardship and rejection. According to her, I have held fast to my values and pursued my calling despite conflict, so she sees me as a success.

That’s right, readers, she sees me as a success. Well, technically, Chelsea came to interview me because part of her project is to meet people to interview by taking referrals from friends. So, technically, it was our mutual friend who views me as a success. So, thank you, Friend, for the vote of confidence…. May I savor that for a moment? Even as the voice of doubt mutters in my head?

Now, because life doesn’t want me to get a swelled head for long, I can follow up this report with the truth that I hadn’t very long to wallow in my success before Chelsea set off for her next interview.  Soon after, the 10-year-old asked at dinner what the Ten Commandments were. This pulled the plug right out of my swelled head. What kind of education am I giving my child that she doesn’t know what the Ten Commandments are? Granted, her religious education has been a little ad-hoc—mostly Passover, with a little bit of Hanukkah thrown in-but she did attend the two’s program at Temple Rodeph Sholom preschool. Come on. All those apple juice and challah Shabbats didn’t do the trick? So I gave a little summary: burning bush, Moses, tablets, rules which are basis of Judaism, Christianity, and Islam, as well as of our legal system.

And then the husband and I tried to recall those Ten Commandments. We knew about having no other god but God, and we knew about honoring thy father and thy mother, and not coveting-although we were a little unclear on specifics. Then I mentioned something about the right to bare arms* (only if they’re toned) and I could see that we needed to consult an authority. A real one.

Fortunately, we are people of the book, and by that I mean friends and offspring of librarians. Indeed, the husband and I met while working in a library. But I digress. The point is, we have books, including reference books like bibles. Right alongside the King James Bible and the New International Bible I have a Tanakh, or Holy Scriptures, which is what Jewish people call the Bible, since if you think about it, the Old Testament is really only old for Christians. We did a quick reading of the pertinent passages and called it a night. I’ll admit there was an interlude involving much laughter about “coveting thy neighbor’s ass.” I’m sorry. It was my fault. Things devolved from there, and it was time for dessert.

Later on, I opened the Tanakh to Proverbs, in search of some wisdom. I may not know much about the bible, but I do know that the proverbs are attributed to Solomon, and Solomon was wise. Right there, in verse one, I found the following: “The proverbs of Solomon son of David, king of Israel: For learning wisdom and discipline; for understanding words of discernment; for acquiring the discipline for success, righteousness, justice, and equity.” Success. Did you see that? Mentioned right there in the bible? Along with wisdom, righteousness, justice, and equity. And discipline. (Erm, does persistence count?) Along with the big guns, there it was. Success, a worthy pursuit. Validation again.  By praise, and by Proverbs. 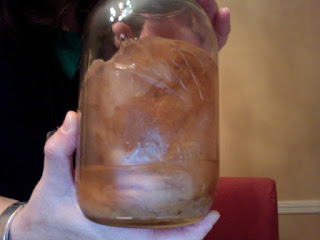 Yes, all and all, a good week. Now, someone please tell me what I am supposed to do with that scoby with which Chelsea gifted me? It’s technically a mold, and I’m scared.

*Clever readers will note that this is from the Constitution.
Posted by Hope Perlman at 7:09 PM

Email ThisBlogThis!Share to TwitterShare to FacebookShare to Pinterest
Labels: success, success in the Bible