Have you noticed that these days it’s all about having a strong core? Core strength is the catchall, must-have, source of all good things for the Two Thousand Tweens. Like stress-induced illness was considered to be in the 1990s, lack of core strength is at the root of all of our problems, according to every article on health and fitness I read. Sure, Pilates devotees have known about this for years. And Martha Graham might’ve had a thing or two to say about core strength. But now, in the popular culture, it’s core, core, core everyday.

Just the other week, upon the recommendation of my running friend Jane, I breezed through Chi Running, by Danny Dreyer, to get some pointers on running form. They  boil down to these three: assume correct posture, tighten your abdominals, and lean forward when you run. Three different ways of saying, engage your core. Because when you stand correctly, you engage your abs; when you tighten them, you are by definition doing the same; and when you try to lean forward when you run, you are forced to engage your core. Try it. Just try standing up straight with good posture and then leaning forward with your feet flat on the floor, bending only at your ankles. Your core must engage.

All this core focus lends itself nicely to sports-life analogies about how to be truly successful in sports or life, you need a strong one. Stephen Covey would agree. As would Montaigne. As would I. And as would, you guessed it, my faithful readers, Heidi Grant Halvorson, Ph.D, who weighs in on the subject of core values in chapter 5 of Succeed: Goals Can Make You Happy.  She talks about different kinds of goals, and says, “Not all goals will bring you lasting happiness and well-being, even if you are successful in reaching them. The ones that will are those that satisfy your basic human needs for relatedness, competence, and autonomy. “ (p. 121)

Let me tell you, you need a strong core to stomach the other book I read recently on my vacation, Odd Girl Out, by Rachel Simmons. This is a book about how girls bully other girls. Simmons's thesis is that, despite being a "post feminist" society, we still expect girls to be nice. What this means is that when girls feel anger, they have no direct ways to express it. Unlike boys, whose aggression is tolerated, girls don't feel free to express theirs. So they go underground to express it, all under the guise of niceness. Adults in their lives often, therefore, miss it. Also, because their aggression is subtle and under the radar, they can deny it exists. Their weapons are rumor-mongering, ignoring, excluding, turning others against the girl they've identified as a problem, and generally isolating her.

The book is full of stories of girl hating girl. Since I was hated on when I was a girl, and since I have two daughters, the book called out to me. Actually, it was a mom friend on Facebook who called out to me a few weeks ago, after I posted that the 10 year-old's best friend had said to her, after discovering they'd both been invited to another girl's birthday party, "I'm surprised you were invited to K's party. I didn't know you were friends." My 10-year-old explained that she and K had been on the same soccer team, that K had been to her party, and that they'd been in the same class in 3rd grade. Her friend then said, "Well, that doesn't seem like enough." After that post, this mom friend messaged me that she and some other moms were reading Odd Girl Out together, so I checked it out of the library. You know, for  light beach reading.

After my second sleepless night, the husband forbade me to read it before bed.

"But I have to finish it," I said. "There has to be a section about how to handle the bad stuff. They can't just write these awful stories."

People, I ask you.


Some time ago I posted the following list on the refrigerator. 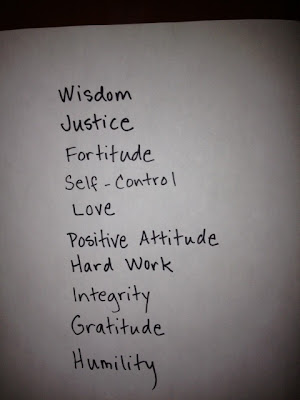 I got it from NPR. Some expert, whose name I missed because I tuned into the program late, was talking about essentials of good character. I don't attend any religious services of any kind, except the Jewish High Holidays, so I tend to worry whether my children are acquiring solid morals. I figured taping this to the fridge was just as good as regular Shabbat services. And much less expensive than Hebrew school. Last time I checked, NPR was still free. I am happy to report that the younger daughter (the 10-year-old), who was probably 8 at the time, ran through the list and found herself in possession of each and every item on it.

Job done. Good morals. Good core. Will withstand any girl on girl bullying, will not participate in any, nor be a guilty bystander.

I have done a good job. Success.