Today I clicked on the "Stats" tab on my blog and discovered more visits to my blog posts than I thought. Thanks, people!  Stats also told me which posts were read most. I probably shouldn't have found that info, though. I'm feeling very conscious now. The post on Independence got the most hits. Well, I don't have another one like that, do I? Racking brains for kid related information...

My 7th grader last week confessed that while we were trusting her and leaving her unsupervised at music school two years ago, she and her friends were entertaining themselves during their break by pouring water through the vents in locked lockers. Retroactive anger doesn't have much use. I was left to cringe aloud at the stupidity of her behavior. Locked lockers at music school probably contain, you know, instruments and sheet music. Presumably instruments tucked nicely into cases built to withstand the streets, subways, buses - and cups of water of NY. Still. 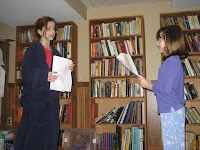 Never mind. She could have been doing so many other, worse things. Or stupider things. Like sticking things up her nose. My sister did that when she was nine or ten, far too old to be excused. She stuck a berry up her nose while at the pool with a friend, then was too embarrassed to tell anyone. When she got home, she confessed to me, breaking into tears. I, being a sensitive, thoughtful teenager, laughed heartily and called my best friend. Eventually, I tried to pry the berry out of my sister's nose with my mother's tweezers. (Forgot to mention that, mom. Sorry.) When that failed, my sister became hysterical. I decided Mom needed to know, so I called her at her office. Mom came home and took sister off to the doctor or the hospital. They returned later, my mother amused there was an instrument designed to remove nasal obstructions, presumably because there are so many stupid people out there.

The lesson to me was that it's the careful people who end up doing the really dumb stuff. We spend our lives making sure, for example, that we can retreat down the rungs of the jungle gym before advancing up another step, don't run too fast over rocky ground, always wear seat belts, eschew skiing, sky-diving, bungee-jumping, and other assorted behaviors. Always look both ways before crossing the street, etc., etc. Then one day, the urge will not be suppressed. There's a lovely bush full of hard red berries. We know we ought not eat them, but what would it feel like to...?

Despite this knowledge, I spent several years yelling "STOP" as my children raced or rolled or scooted headlong down the streets of Manhattan. "Not Safe," was my two word reason for denying many an activity, and I even remember watching with stomach clenched in fear as my first child gummed a Cheerio at 6 months and choked. Food = Not Safe. Hmmm. Problematic. My kids are basically cautious. Which of course makes me worry what asinine things they'll decide to do when they are old enough to know much better. If it's as simple as pouring water over an instrument through a locker door, I'll have gotten off easy.
Posted by Hope Perlman at 8:28 PM

Email ThisBlogThis!Share to TwitterShare to FacebookShare to Pinterest
Labels: motherhood