At the beginning of October, I took a pair of chinos to the tailor to shorten them. This was my first time at this tailor, as I've not needed one since I left NYC and Leung's tailor shop on Lexington and 92nd (they make shirts there, by the way). The guy was very nice, the shop was full of work, so I left the pants. When I picked them up, I made my first mistake. I failed to check the hem. I was in a rush, we were going away for the weekend, and I had to go. When I pulled the pants out of the plastic to pack them, I noticed the stitching was very obvious. The pants are blue, and the stitching was contrasting, whereas all the other stitching on the pants was matching blue. Well, I threw them in the suitcase because I needed pants, and trundled off for the weekend.

The stitching really bothered me. I tried ignoring it, but when you're as "low to the ground" as I am, you don't want any contrasting stitching attracting the eye downward. The tailor had told me he was going away on vacation for a couple of weeks, so I waited until today to take in the pants. Needless to say, I had no receipt--my second and third mistakes were throwing that away, when I tried to convince myself the stitching was fine--but all of my information was in the cash register/computer, so I knew he could look me up. 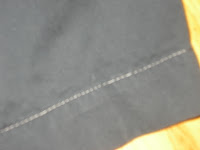 There was a customer in the shop when I arrived, so I waited for her to leave before approaching the guy. I showed him the hem and told him I was not so happy with it. He took my name and number on a new receipt and said he would look up the invoice. Then he told me to leave the pants with him and he would get back to me in a week whether he found my information. Whether, that is, if, he found my information.

This was not going to be one of the "the customer is always right exchanges." And if he didn't find the receipt, he said, he would have to charge me to redo the hem. I told him I'd like him to call me before he did any work, and at that moment, I believe, the transaction changed. As I saw how the wind was blowing, he began fingering the stitching and told me he would never do work like that. He got out a spool of thread that matched the pants and said that would be what he would use. I said, yes, that would be the right color to use. Then he suggested that some people do their own hem and then they don't like it and then they come in and ask him to redo this work. For free, was the implication.

Okay, he said, leave the pants. I said I'd rather not leave the pants (fantasies of returning for the pants and the pants having mysteriously vanished), but that I'd be happy to bring them back in once he'd looked up my information. I asked him couldn't he do that right now, and he shook his head and said he couldn't.

Another customer arrived. I had been trying to avoid embarrassing him, but now I said that when he located my receipt, he could just give me a refund. He said, fine, and I left. At the car, I realized I had left without my copy of the new receipt of this transaction, which would be proof that this conversation had occurred, something I was now sure I would need. I returned to the shop. The customer and the tailer were smiling and talking and the customer looked away, suggesting that naturally I, the disgruntled self-hemmer was trying to take advantage of the reputable tailor. I asked for my receipt. The tailor refused. No pants, no receipt, he said. He could look up my information and let me know, but he wouldn't do work like that. Not in his shop.

I left the shop adrenelated. I know that's not a word, but it should be.  He was never going to look up my receipt, and even if he did, he would pretend he hadn't found it. The cost was minimal, maybe twelve dollars, but I'm on a tight budget. Besides, there was a principle at stake, maybe more than one. My integrity had been impugned, and there was nothing I could do. It would take this guy a matter of seconds to look up my name and phone number, but he wouldn't do it. Short of creating an ugly stink of a scene, it was unlikely I'd ever get either satisfaction or a refund. It was only twelve dollars, but twelve dollars is clearly worth the fight to Mr. Delmar Tailor. I thought about going back in. I'm still thinking of it. I thought of walking back in and asking if he's had the chance to look up my information yet. When he said either no, or that yes, he had, but that I wasn't in his records, then I would say, politely, that I was sorry to end on this note, and that my blog readers would be very interested in this transaction. In my fantasy, I neglected to mention that I have, to my knowledge, maybe two or three readers within 50 miles of here, but that would be my secret.
Posted by Hope Perlman at 4:17 PM