Annals of a Type B Guru 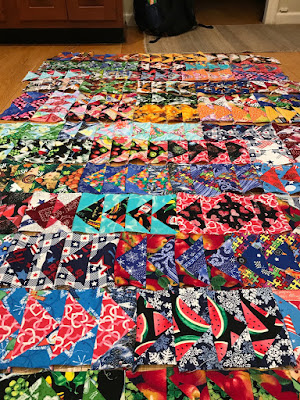 It may not be hard to remember to write 2020. It flies off the fingers easily. Twenty-twenty. 20-20. Let’s hope the whole year is easy. Let’s hope, as my friend A said, that when it comes time to vote, everyone has 20/20 vision this year. Let’s hope that we can all apply a little clear-eyed hindsight to our future visions.

This blog post is not going to lay out any resolutions. Nor is it going to contain a recap of the highs and lows of last year. I am annoyed at myself for posting less often than I want to, and there are many reasons for this. Father in hospital being a big one over the last month. The high school student performing in the All-State Symphony and filling out college applications being another. Grading the end of semester papers a third. Those are excuses, however. I realize part of why I haven’t been blogging as often as I used to is that I am suffering from perfectionism. Or at least my Type B personality version of perfection. In short, I want everything I put out there for you, Readers, to be pithy, or at least witty. Maybe I am letting perfect be the enemy of good, as the saying goes.

Or perhaps perfection is too lofty a term. As I mentioned, I am a Type B personality, and we Type Bs are not known for perfectionism (and certainly not for perfection). That’s the stuff of the Type As. Type Bs are likely to make a quilt, for example, that ends up with one strip that is an inch longer than all the others. This would never happen to a Type A. So then Type B has to rejigger the strip, maybe rip out a quilt block and trim it or turn it or something. You know, adapt it and make it work better. By the way, this quilt is another reason I haven’t been blogging as often as I like. But, still it’s another excuse.

Even if perfection isn’t my aim, better is the enemy of good, as writer Amy Halloran (https://amyhalloran.net/)  put it at our holiday gathering of local writers. Better can be the enemy of good, too. Because even if you’re wise enough to know perfection is impossible, better is always possible. I truly believe in better. My life has been all about being better. Sometimes, however, good is best. Sometimes good is better than better. Apportioning effort is also necessary for survival, even for success.

While walking the dog the other year, I was listening to a Gil Fronsdal podcast called “Caring for Yourself and Caring for Others.” The other year. Yesterday, to be exact. Yesteryear, one might even say. He was discussing a Buddhist sutra that talks about how to be happy. One way to care for yourself is to live ethically—abide by the precepts like Do No Harm, (is that the Buddhist precept, or is that a medical precept? Who knows, I am tired. Last night was New Years Eve and it was a late night.)  Another aspect of happiness is that caring for others develops your own happiness. The idea is that by developing kindness towards others, you make yourself happy. This taps the philosophical question whether altruism is really altruistic if it makes the do-gooder feel good. According to Buddhist philosophy, the overlap between altruism and happiness is natural and inevitable. There doesn’t have to be a separation between the two. Just because altruism makes you feel better doesn’t mean it’s not altruism.

Gil Fronsdal mentioned during this talk that at some point in the Buddha's life, he had about 60 enlightened followers. It struck me that I would never imagine that I could be capital-E Enlightened. Yet the Buddha had 60 guys who were enlightened during his life. Perhaps he was just that good at teaching. But that is not the point. The point is, I had a thought. I thought, what if I am enlightened? I mean, think about it. I’ve been meditating off and on for twenty years. I’ve had lots of therapy. I’m introspective and I’m planning to become a therapist (I.e., to help people deal with their emotions and life challenges). What if I am enlightened? How would that make things different? Consider that enlightenment is often described as coming in a flash, an epiphany. Which means enlightenment might not be a permanent state, existing off on an astral plane, unbothered by anything human, being just a floating protoplasm of wisdom, tantalizing mere mortals who want to to tap that.

What would it mean if I were enlightened? Maybe enlightenment just means something simpler and more down-to-earth. Maybe this is it, that’s all there is, that’s all she wrote. Maybe enlightenment means that I know I have ups and downs and arounds of emotions, that I don’t like some of those emotions and wished they would go away and that I could be this amazing, placid, font of light and whatnot. Wisdom. Love. Positive energy. Peace. Meanwhile, at the same time that I wish to be that avatar of goodness, I’m embarrassed to say so, and that’s just the way it is to be me.  Maybe enlightenment is going about the daily rounds understanding that sometimes you’re up, sometimes down, and that it’s always changing. That love is sometimes encrusted under resentment, or tucked away from harsh feelings, or even hidden from your own view.

And that it’s exactly the same way for everyone. So, cut them some slack. Or at least have empathy, even if you cannot excuse their behavior (not right action) or their nasty words (not right speech).

Isn’t all this just a way to say maybe it’s okay to say I’m okay as I am. I don’t have to be other than what I am, my imperfect self, my wabi-sabi self, my kintsugi self. Maybe there is no better than that. Maybe good is better.

Maybe enlightenment is that moment you understand something important —an epiphany, possibly an ineffable one—and then it slips away. Maybe the slipping away part is part of the enlightenment, too. You know it’s coming at moments, in flashes, or phases. And other times you’re just a bitch driving a car and flipping off an old lady who’s driving too slowly in the left hand lane.

Here's a final thought for the new year. since I am supposed to dispense advice and tips on how to live successfully.  As Jon Kabat Zinn writes in Full Catastrophe Living, “As long as you’re breathing, more is going right for you than wrong.” Or something like that.