It Takes More Than a Dollar to Save a Dollar 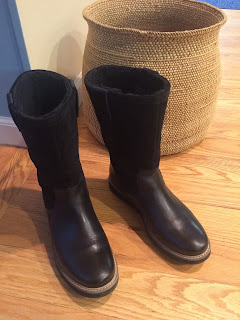 “What’s the difference?” I asked the cashier, who was both tall and slender, and he said, “That one’s better. It lasts longer.”

Which one do you think he pointed out?  That’s right, the more expensive one. So I picked it up. Yes, I was about to buy it. But then something broke through in my brain. A little voice inside me doubted. A little voice inside me said, Hope, don't fall for the fake news. So I picked up the cheaper spray and read the label. No warning about reapplying frequently or anything like that. Just a cocktail of noxious chemicals. Just like the ones the more expensive bottle promised to spray into the air.

Reader, I bought it. I bought the cheaper spray. There's lesson in there for all of us. Something along the lines of how much harder it is to save a dollar than to spend one. That’s because it takes more than a dollar to save a dollar. Unless you’re a kid who gets an allowance. But to earn enough money to save a dollar can take a lot of money. So don’t waste it. Something like that.

In other news -
It’s hard, but I’m breaking my social media habit. Things got a bit too compulsive with me and Twitter over the last couple of weeks. I got into a thing with a couple of trolls. This led to a long conversation with a conservative man that caused me to spend a lot of time researching facts to combat his fake news take on things. In the end, the conversation was overtaking my brain, and while the arguing and the research were helpful to me because they forced me to express myself clearly - not to mention to read the news closely - ultimately, it was a waste of time. He went his way, I went mine. Nobody changes anybody's mind unless they're ready to change. And I decided I need to get off Twitter.

One of things this guy said was that he read a couple of my blog pieces. After he read a couple of my blog posts, he said he recommended I call what I’m defining something other than success. According to him, I’m not talking about success as much as I’m talking about love or something else. He pointed me to some guy with some theory about levels of love. I ignored it, because he was being very unloving about immigrants and I was busy sending him links to Pew Research articles.

I suppose this guy was trying to be helpful. I suppose he meant it as a nice gesture, but I couldn’t help thinking that this guy totally missed the point. If I call what I’m defining something other than success then I’m no longer redefining success. Now, he was a commercial real estate developer, which means - and I here stereotype freely - that he has that traditional, old-school, money+ power +prestige definition of success. You know, the one that was crushing me until I figured out a way to feel successful without those things. At least some of the time. But I do see what he means.

So. Let’s tawk, Readers, about the key to success of having like-minded others who act as loving mirrors for you. I mentioned this in passing last week, when talking about Adam Grant and how he focuses on collaboration and other skills that lead to the greatest success. Collaboration is actually different than having loving mirrors. Collaboration means working together towards a common goal. Cultivating like-minded others means accepting help from others to help you reach your goal, and doing that for others in return.

One thing that works quite often is establishing a regular gathering of these like-minded others. Entrepreneurs do this. Benjamin Franklin did this. Napoleon Hill recommended (men) start Mastermind groups. As I’ve mentioned, I have a monthly conference call with a couple of like-minded women. We have been meeting over the fiber optic cables for over five years now. Each of us has her individual goals, and we report on them to one another, offer each other support, suggestions, pep-talks, or ideas as needed. As you know, I’ve been through ups and downs. Well, we all have.

Today, our conversation started out down. We were all down. But by the end, we were all up and inspired. My friend C (as in, Met Her in College), said, after a few minutes of rumination on current events, that we have to make sure we take care of ourselves and continue to work towards our goals. We cannot allow ourselves to become demoralized and immobilized. We have to strengthen ourselves so that we can come back strong. This was heartening and inspirational.

But we are more than inspired. We are successful! Take E. She started out with an idea she wasn’t sure how she wanted to develop. Over the past five years, she tried writing a book, had an agent, lost the agent, gave up on the book, considered a podcast, felt discouraged, started a website, hosted a gathering based on her project, and from that gathering got the idea of a new way to work with her material. She’s turning it into a stage production with help from people she met at the gathering she hosted because of the idea she had five years ago. In between, there were times when she wanted to give up her project entirely, but we, her loving mirrors, convinced her it was important and worthwhile to pursue. And now she feels she has the right format for her idea, and she has a director and an actor and writer to help her bring it into production.

That is the value of meeting with a group of like-minded others. They act as loving mirrors who reflect your possibilities back at you, give you courage when you lack it, and show you a better you.

I call that inspiring.
Posted by Hope Perlman at 3:32 PM