The Imperative to Find the Good

The other week began with the 13-year-old saying, “You know, it’s like we actually live in a dystopia.”

"Why is that?" I asked her, wondering if it was time to find her a therapist.

Because, she said, among other things there are these:


This is kind of bleak, don’t you think? Even for a thirteen year old? Especially for a thirteen year old? No - even for a 13-year-old. So world weary and knowledgable already. Come to think of it, though, I  had things all pretty figured out at that age myself. And I was quite the cynic, too. I used to say, “I’m inexperienced, but I’m not naive.” I might have been alluding to sex related activities, but that’s no surprise in a teenager, is it? And I certainly felt that way about EVERYTHING. Dystopian novels are very popular amongst the cynical, young adult, a.k.a. teenaged, crowd. Their world-weary cynicism might actually be the reason for the large number of these novels, rather than the effect of it.

So after I reconsidered her cynicism and put it in perspective, I was able to think about what she was saying. I thought the child’s observation was interesting. I tend to think dystopian novels are warnings of what COULD happen. Her comments made me think that dystopian novels, like all true novels, are painting life as it is. At least the author is painting life as she feels it is.  Dystopian novels are pointing out what has happened, what is happening, and what we might not want to have happen.

We can change it, of course. Because now that I’m no longer a world-weary teenaged cynic I have a pitiless imperative to find the good in the world. I believe in change. I even believe in our constitution and our legal system. Else why go on?

So speaking of good in the world, and accomplishment, well-being, and success, let me remind you of the spectacular failure we had with our parakeet Scout. About a year ago, if memory serves me, we had our pet bird for a week. (That's a link to the full, sad story of Scout, if you want a refresher.)

Despite that painful episode, which has left us with a fully-equipped parakeet condo that any self-respecting bird would absolutely love, the 13-year-old is still interested in birds. Not so much that she has wanted another parakeet. Nor does she want to get rid of the parakeet condo. The rest of us are right on the fence about this with her. Or at least I am. The 16-year-old remains traumatized and says, “How could you even think about another bird?” Since we still have the dog, she means. Which we do. And he is very cute.

Nevertheless, the 13-year-old remains interested in birds. Lately, she has begun focusing on bigger birds. Possibly because the dog would leave them alone. She is interested in falcons, to be precise. Last spring her school had a guest falconer and his birds and she decided she would like to learn falconry. She wrote to the visiting falconer, who did not deign to respond. After futile Internet searching by us for falconry schools, I called up the bird store where we got our poor parakeet Scout. Even thought they don’t sell falcons, I thought maybe they would have a lead. After all, they are bird fanatics. They host weekly Saturday afternoon Bird Socials. You can bring your pet bird and mingle.

Without reminding the bird lady of exactly who we were (irresponsible former parakeet owners), I asked if they knew anyone who studied falconry, and lo and behold, they did. They didn’t want to give out his name, so they took mine and said they would give it to him when he returned from his vacation.

Well, a few weeks later -  knock me over with a feather - the husband, the 13-year-old, and I were driving about an hour north to meet Tyler the falconer and his red-winged hawk, Phoenix. 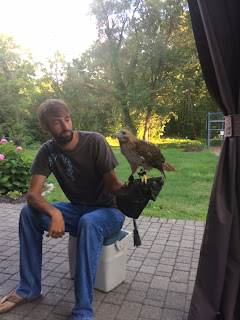 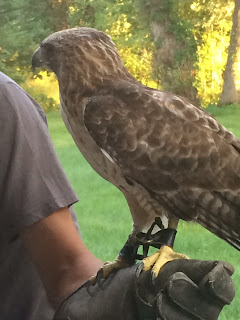 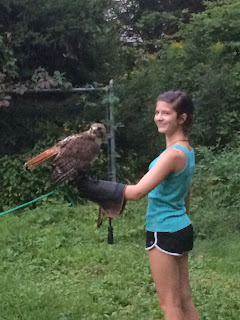 At first, I watched. Then Tyler asked if the husband and I would like to take a turn feeding Phoenix. The husband leapt up right away. I hung back. There was so much to dislike about feeding the bird. Tyler had spared no details describing how filthy Phoenix's talons were. Germs, death, grossitude were all potential results of a scratch. Then there was the raw chicken that Phoenix was eating. 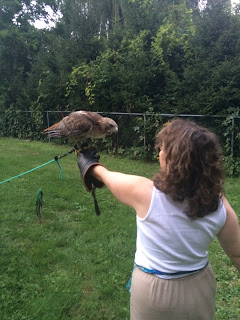 Things you did not do when you had the chance. Like having a red-tailed hawk land on your arm and eat raw chicken out of your hand.

Then we all trooped into the house and washed our hands. And nobody got sick.

The whole experience was proof that there is goodness in the world. Even in every dystopian young adult novel I've read, there is someone and someplace that is a refuge and repository of the good. And the heroine's job is to find that place and person, and bring back the good. Else why go on?

From the bird store lady who gave Tyler our message, to Tyler, who followed up. And again, to Tyler (and to Phoenix), who showed the 13-year-old everything he knew about falconry. This included the huge, enclosed aviary in his backyard. Aviary might not be the right name for it, but it was a large, enclosed area fenced on all sides for Phoenix to perch. This also included the kangaroo leather and carving tools Tyler uses to make jesses for the bird's legs, to keep him attached to his leash; and it also included a sharp, heavy stake he carries with him when he hunts with his bird in the dead of winter, and has to be prepared to finish off any bunny or other wild animal he flushes from he underbrush. Finish off, as in kill the rest of the way, if Phoenix doesn't get it right away.

If I may be so bold as to say it, I am proud of myself of feeding that beautiful, wild bird, and I am proud of myself for zipping my lip on the way home about how much work it seemed like. And I am most proud of my daughter, who said a few hours later, that she admired what Tyler was doing, and she thought Phoenix was beautiful; but falconry was not for her.

We wrote thank-you's to Tyler for his time and his kindness. We are holding onto that parakeet condo for now. Just the other day, I found a list the 13-year-old and a friend made, describing how when they went off to college, they would be roommates, and they would get a bird - and a cat.