Notes from this Week

Monday
Implementing Dr. D’s suggestion to substitute herbal tea sipping for my afternoon snack habit. Though it hurts me to write this, it is true that my waistline is less svelte than it used to be. My eating habits haven’t changed, but my metabolism -- well, you know the deal. Every decade the metabolism slows a bit. Or every seven years. Or is it that you get itchy every seven years? Or is that every decade? Anyway. If you’re me, you are both itchy and metabolically declining. And by itchy, I am referring to my hive-prone skin, not to the cheat-on-the-spouse kind of itchy.

My attitude towards the metabolic shift swings back and forth. It, uh, shifts, depending on what kind of sweets or delicious carbs are in the house and on the menu. Something over which I, apparently, have a lot of control. Sometimes I’m, like, what the heck, who cares? I’m getting older and getting fatter and why should I give up my sweets and carbs in a false attempt to stave off the Inevitable? Death, etc., let’s call it. After all, Death, etc., comes to all of us.

But sometimes I’m, like, what the heck? I still feel like I’m thirty. Why shouldn’t I look that way as long as I can? Please, Readers, if you know what I look like, don’t disabuse me of this fanciful notion by telling me that I left thirty behind long ago, looks-wise. I know I left it behind, years-wise.

So today is a sip-the-herbal-tea instead of eating-the-chocolate-covered-almonds day. Today’s a hoick-the-waistband-over-the-waist-bulge day. A Pilates mat class day, (which was rawther humbling). I know I’ve got abs of steel somewhere. If I press into my belly far enough, I feel the steel. Take that Death, etc!

The kitchen faucet is magical. 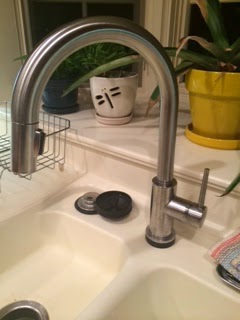 There I was, typing away in the dining room, when I became aware of an insistent shwishing sound. Like a flood or something. The sound was coming from the kitchen. I rushed in and realized that the faucet was on, full-throttle. It had turned itself on.

How is that possible, you ask? The kitchen faucet is magical, I tell you. It is a wonderful looking faucet, all modern and sleek. We picked it out of thousands, lit’rilly. And for once, I broke with my usual caution and went for the fancy, newfangled option, the touch option. You know, so when your hands are gooey, you can turn the faucet on by tapping with the back of your hand anywhere on the neck or handle.  I couldn’t resist. Even though one should always resist. The more complicated mechanical things get, the more they involve batteries and bells and whistles, the more likely they are to break down.

But it was so pretty.

The husband installed it. And it works great. Usually. Except sometimes you need to pound it several times to get it to turn on, and then it won’t turn off, except when you use the handle. And sometimes when you want it to stay on it turns off abruptly; and sometimes it goes off and on like a choking chicken.

And sometimes it turns on when you are typing on your laptop in another room.

It’s great, except for that.

The husband says he’s going to fix it; but he has a full time job, so I’m thinking eventually we will have to call the plumber and take whatever mockery he dishes to us.

But it is so pretty.

It’s time for me to take a break from all the menopause memoirs I’ve been reading. Yes, sure, they’re funny. Yes, sure, they’re written by women who are about my age – or were, when they wrote these humorous books. But the thing is, I’m starting to feel old. They keep telling me that my vagina is dry, or possibly collapsing, and that my emotions are overwrought; that I want to throw plates on the ground or whole turkeys out of windows; that my nasolabial folds – those are the creases around the mouth, for your information – are deep enough to plant shrubberies in. That I’m washed up and can’t get any roles in Hollywood. Not that I’m trying too get roles in Hollywood, but I like the idea that I could. Well, apparently, not anymore. Basically, I’m getting the message that I’m over the hill, that my looks are going – or are gone.

The thing is, I feel great. Except for the need for higher waisted jeans. And a few age spots. And a few chin hairs. And stuff like that. Over all, life is good. I baked bread, Readers. I told the husband a few years ago that if I ever baked bread again, it would be a sign that I felt good. And I baked bread.

Now that I typed that positive thought, I’m looking up and over my shoulder. Where’s the big boot from the sky? The one that stomps on me if I dare to feel positive? Before the boot appears, I’m going on the record to say things are good. I know that can go ass over teakettle at any moment – and will. But right now: Good.

I can’t be arsed.

Taking a break from all those menopause memoirs to read Tana French’s newest book, The Secret Place. It’s a mystery set in a girls’ boarding school. I’m very into it. All that hard-boiled Irish copper slang has seeped into my language. I’ve been thinking in a lilt. I particularly like “I can’t be arsed,” which means, I believe, “I can’t be bothered.” I’m ashamed to admit I have had to stop myself from saying it aloud to one or another of the children. Although, why I bother to stop myself I don’t know. It’s not as if I’ve stopped myself saying other inappropriate things around them. Or to them, I confess. In fact, of late, I feel as if I’m just giving over to my baser – or perhaps more basic – tendencies. Ah, who am I kidding with this delicacy? It’s been out of the bag for eons that I enjoy a good scatological reference. I’d like to behave more better, as we say.  More parentally. I really would. But I just can’t be arsed.