The 15-year-old turned 16 this week. I didn’t have my usual birthday breakdown, probably because my last birthday caused such an extended breakdown that I didn’t have anything left to break down. It’s life. We’re lucky if it goes on and we turn another year - heck, another day - older.

But to back up. Last weekend involved yard work. Readers, you know how I feel about yard work. Yish. But this was official yard work, or perhaps better to describe it as planned, special yardwork, not maintenance. The husband and I put in full morning with a landscape designer, providing free labor. See, we’re implementing a plan for the yard. Plans for yards are very expensive, especially if you want to do them all at once. The neighbors next door did that last year. And just a couple of weeks ago, neighbors down the street did it. Bulldozers and a crew and about three days and the dog and I saw the whole yard redone: new shrubs, a weird retaining wall, and a carpet of sod.

Fortunately for the budget, that is not my style. So, I got a consultation on the yard from a really nice landscaper, Sandy Z, who suggested ways to do the work in stages. We spent the morning moving things from the front yard to the backyard and vice-versa. So, goodbye to the last of the rose bushes – too much work for too little reward. It took us 5 years, but we killed them all but two. Hello, coreopsis. 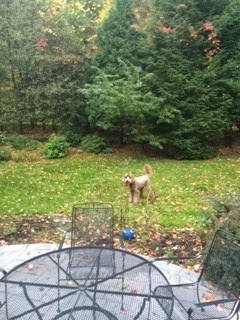 And hello, back spasm. Yep. Sandy Z brought one helper with her, and I offered up the husband and myself. The husband proved a good worker. I proved, if there was any doubt, that I’m a better conceptual gardener than an actual one. As I patted down some lovely earth around a coreopsis, a spasm that was embarrassing in its severity practically rendered me incontinent. I managed to shuffle inside, where I lay on the floor for a while, and then popped a few Ibuprofens.

After throwing out my back, taking the 16-year-old to the DMV for her learner’s permit was a pain. But let’s be honest about this pain. It wasn’t the hard pew-like benches upon which we sat that caused the pain; it was my back, which reacted as grouchily to getting up from the couch as from the bench. I just noticed it more in the bureaucratic space. To alleviate the pain I read my book, Americanah, standing up while the teen took the written test. When she came out to get me – to pay, bien sur – she was indignant that the clerk at the window had been – imagine this, at the DMV – rude and humorless. So, a rite of passage in more than one way.

Americanah, by Chiminanda Ngozi Adichie, by the way, is excellent. Well-written, a good story, and educational about race in America.

This weekend involved an archeological dig, as well as the 16-year-old’s birthday sleepover. Here in the suburbs, all you do is open the front door and show the guests the way to the finished basement. Use those brief seconds to memorize these faces, since you've barely seen them before and you won't seem much of them again. At some point, provide pizza and some kind of dessert with candles, which let’s be honest, the teens would prefer you send down the basement stairs to them on a tray-sled. In fact, the only evil look I garnered came when I descended the stairs to say the pizza had arrived and they should come up to eat. The husband had already informed them of this, so my presence was clearly unnecessary and therefore against the (unspoken, we figure them out as they come, rules). After dinner, they disappeared downstairs again, and entertained themselves until late morning. Easy peasy.

An archeological dig, did I say? Yes, that is correct. During the summer, the 12-year-old took a weeklong archeology course, and signed on to do this dig in October. This weekend was the time, and there was no chance of forgetting about the dig. The 12-year-old saw to that. She’s nothing if not dogged.

Since the MIL was visiting, to see the 16-year-old for her birthday, and the MIL has some experience with digs, we three took a lovely drive out into the countryside to the farm where the ruins of a presumed 18th Century tannery have been found. Turns out that we missed the memo about the rain date and arrived to discover the dig had been rescheduled for the next day. But the farm’s owner, who also happens to be the town historian, took us out to the site, a fair hike into the wet woods. He and his wife were lovely, despite their yard sign urging a repeal of the SAFE act. Friendly conservatives! Imagine! They even insisted we use their bug spray to ward off ticks. If they’d known we’d voted for Obama twice, do you think they’d have done that? Coming down with Lyme disease might keep us from the polls this November and Astorino would have a better chance.

Anyhoo, the MIL left this morning, so was unable to return to the dig, but the 12-year-old and I drove out again, and spent some hours with a troop of boy scouts and the two archeologists stumbling about the woods, placing red flags on rock piles, and then using a giant sieve and spades to sift through a lot of dirt. One of us was very concerned about tweaking her back again, and poison ivy. The back is fine, and since every garment that came in contact with foliage and shrubberies has been loaded into the washing machine, and the hands have been scrubbed vigorously, I’m cautiously optimistic that I’ve avoided that latter pitfall. Time will tell.

What else? Probably in relation to my child getting older and closer to high school graduation, I’ve started thinking about what I need to teach my offspring when they are on their own. In that vein, I decided to be all French mom-ish and introduce them to the joys of weekly facial exfoliation techniques. Guess which of the children was interested, the 12-y-o or the 16-y-o? So the 12-y-o – yes, patpat, Readers, you are right – enjoyed her first mom-sanctioned exfoliating scrub, followed by a spritz of mineral water.

The 16-y-o said, “Yo, what’s the big deal? I scrub my face with the stuff and rinse, right?” And I said, “Yo, don’t you want the experience of a spritz of mineral water?” And she said, “Yo, you wasted your money on a can of water?”

So, I guess I’ll call it success all around. The young ‘un washed her face, always a plus. And the old ‘un has appropriate skepticism towards marketing. Yay? Yay!
Posted by Hope Perlman at 5:16 PM