On Not Sending the New Year's Card and other Failures 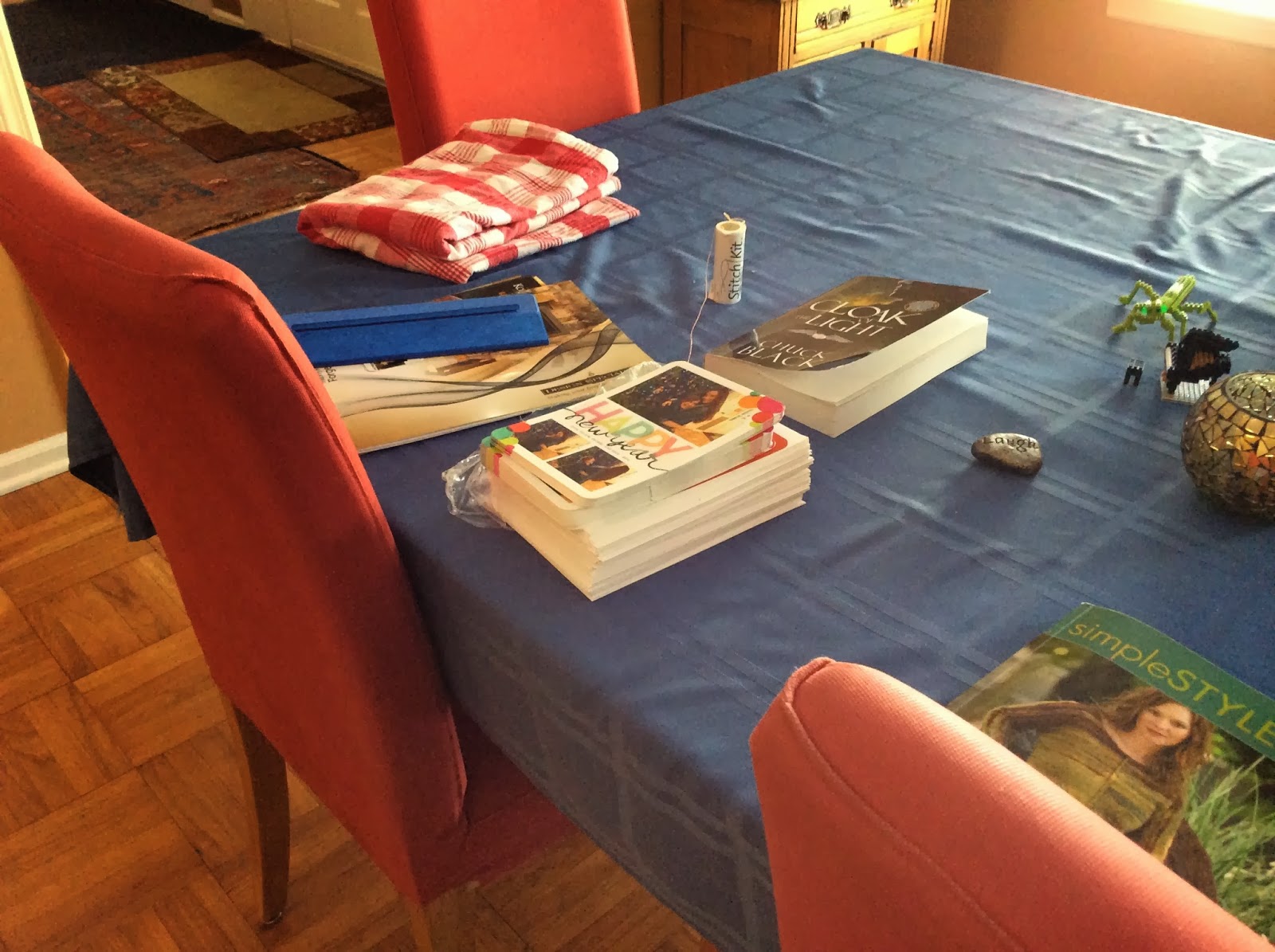 I missed my weekly post last week. Sorry. There was the middle school musical. It was tech week and then there were four performances. This wouldn’t have been so much to do if I weren’t on the Make-Up Committee, but I was on the Make-Up Committee. And there was a lot of make up to apply for the show, Seussical, Jr. For a 7 pm start time, we had to arrive at 4:15. With a cast of 65, there were a lot of faces. I painted giraffes, leopards, wolfish things (including the 6th grader), as well as eyeshadows on Circus McGircus players, and forehead swirls on Whos.

It was fun, Readers, okay? I got into this situation because a couple of years ago I did the make-up for the 11 year old and her friend when they went trick or treating as Goth girls, and apparently my skill in that endeavor reached certain channels leading to the middle school musical make-up committee. Okay, truth: At the informational meeting that followed auditions, all parents were instructed to volunteer for one committee or another, and as we swarmed around a table filled with clipboards, my friend, whose child was a Goth girl with mine that Halloween said, “You should do make-up, cuz you did that Goth make-up so well.”

I am sorry to say I failed to take away a single photo of my work. I was so busy. So you’ll have to take my word for it. It was spectacular.

I did take away a cold, however. When a large portion of 65 children breathe in your face, it’s the thing you do. I’m not complaining. It could’ve been a stomach bug. I gave them nothing as long-lasting. As one of the other make-up committee members and I confided to one another, we made sure to eat a mint before working, and to apply more make-up than usual (which is usually zero in my case) to ourselves, so that we would project competence to the middle schoolers who presented their faces to us.

So. That was last week. Now another week has gone by and I am sorry to say I am avoiding writing. I’m avoiding the blog. I’m avoiding the shitty first draft. I’m avoiding the labels for our New Year’s card. The card that is waiting patiently in a nice stack of identical siblings to get enveloped and stamped and sent to sixty lucky recipients. Sixty. Not even enough to cover everyone on our mailing list. How did that happen? Vague memories of having lots of extras the last time we sent out a holiday card (it’s been a few years) in tandem with no memory of how many of that year’s cards we ordered. So we estimated. Underestimated in this case. I’m actually pleased to know we had more people on our list of friends and family than we thought. Chuffed. I’m chuffed. Though not chuffed enough to go to Staples, buy the blank labels, print them at home and slap ‘em on the envelopes.

And now we have one more piece of evidence why I’m not a household name. I can’t even get myself to get my name into the households of people who actually know and care about me. Purportedly. I don’t want to assume too much. For instance, to assume that people on the list would enjoy receiving a New Year’s card from me. From us, I should say. From the family. With a line or two of personalization across the back. That would be presumptuous.

It’s a really cute card, though. The husband and I are absent from it, leaving only the younger members of the family – the girls and the dog – which ups the attractiveness of the card, although perhaps lowers the total interest receivers might take in it, as it eliminates the chance to examine how life has aged us. This wasn’t intentional, this omission. I would’ve opted for a photo of all of us; but if we’d waiting any longer to get a good one, then we wouldn’t have ordered the cards, which have been sitting on the dining room table, ready to roll, for three weeks.

With all this baggage surrounding a holiday card, it’s not marvelous that I hesitate to impose myself on people who don’t know or care about me, an endeavor that would help make me a household name.

If I were a household name, I would have an assistant who could go to Staples and send out these cards.